Weddell Sea In Search of Emperor Penguins with Helicopters

Experience the bird’s-eye-view of Antarctica! Our helicopter capability on m/v Ortelius gives you the rare chance to see the famed emperor penguin rookery south of Snow Hill Island, numbering around 4,000 breeding pairs. Heavy ice may prevent entrance to this area from the Weddell Sea, and ice at the rookery itself might break up and start tomelt earlier than expected. With this in mind, the aim is to stop the vessel between the Antarctic Sound and James Clark Ross Island, close to the ice edge, and find emperor penguins on their way to open water. The thrilling helicopter flights make this search possible, enabling you to land in locations otherwise inaccessible this early in the season. If ice conditions are favorable and the route to Snow Hill Island is free of multi-year pack ice, you have the chance for ship-to-shore helicopter transfers to Snow Hill Island (roughly 45 minutes walking distance from the emperor penguin rookery). If successful, this is a once-in-a-lifetime experience. But please remember that nature writes the final itinerary out here: Attempts to reach Snow Hill Island during the voyages of 2012 – 19 did not always succeed. However, in 2013 and three years in a row (2017 – 2019) conditions were favorable to land by helicopter on Snow Hill Island and to visit the emperor penguin rookery. 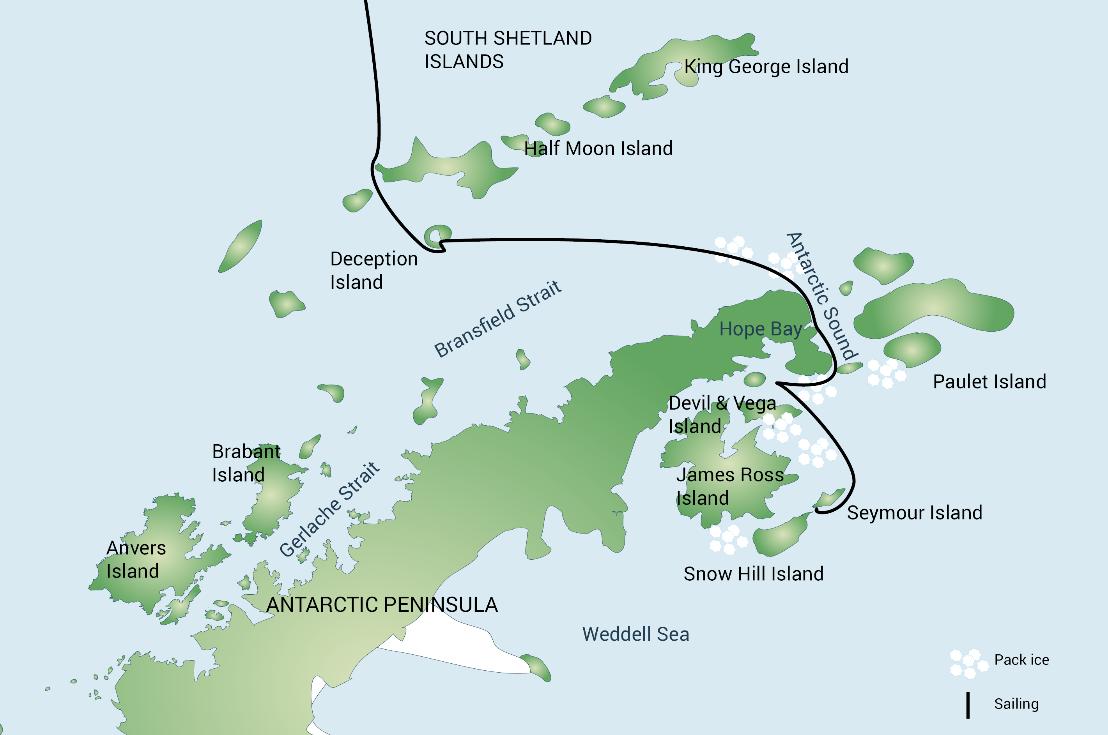 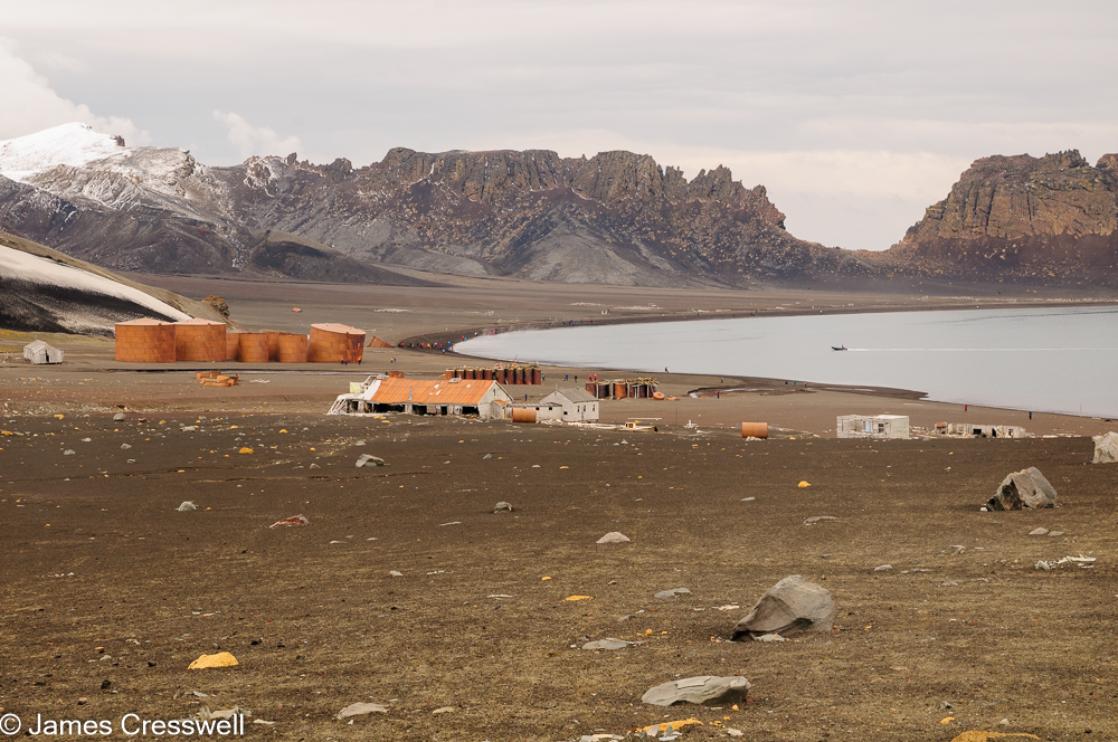 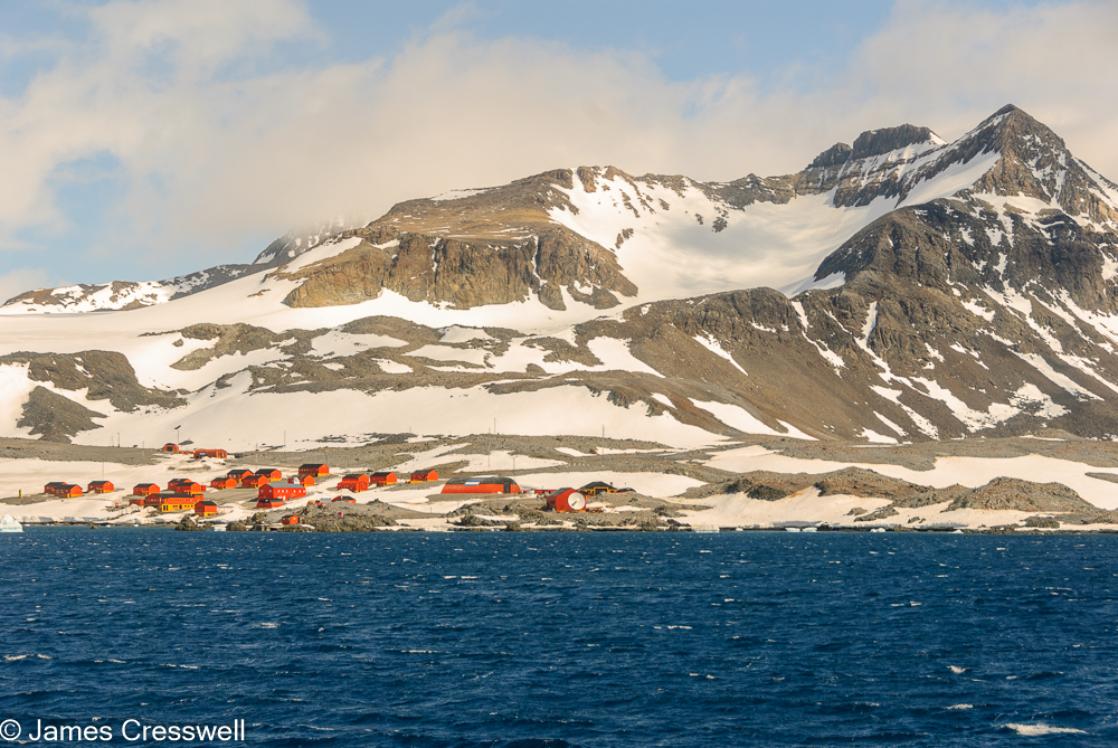 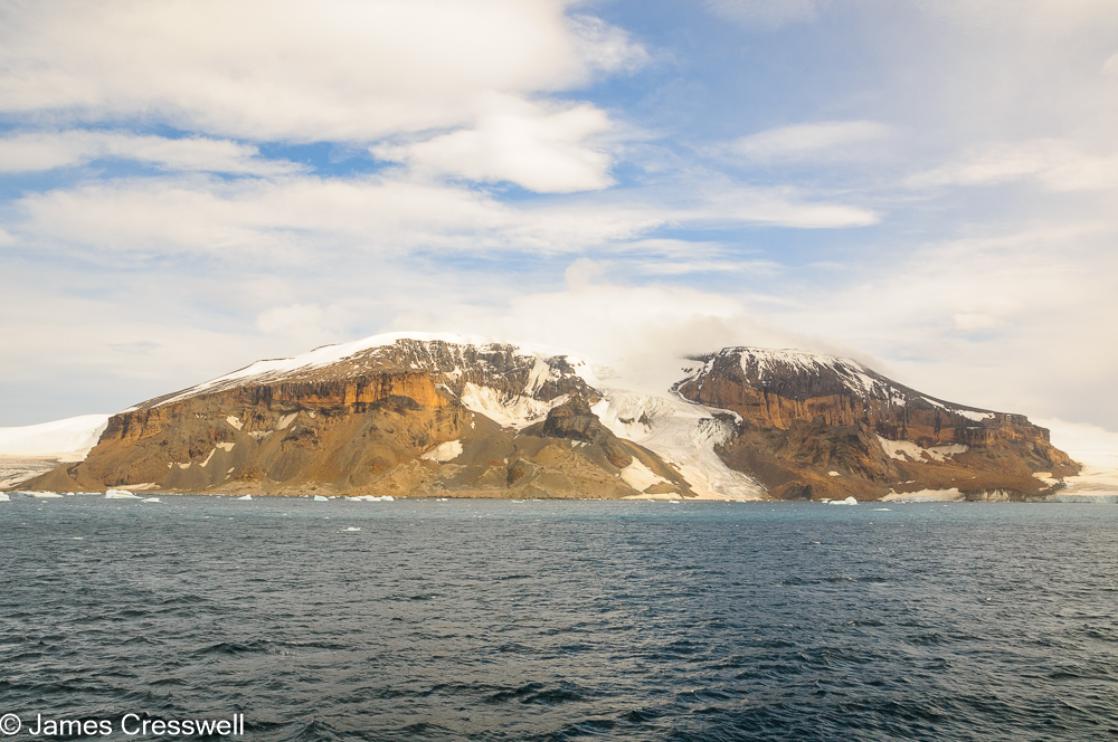 A glacier flows from the summit of Brown Bluff englacial volcano, Antarctic Sound 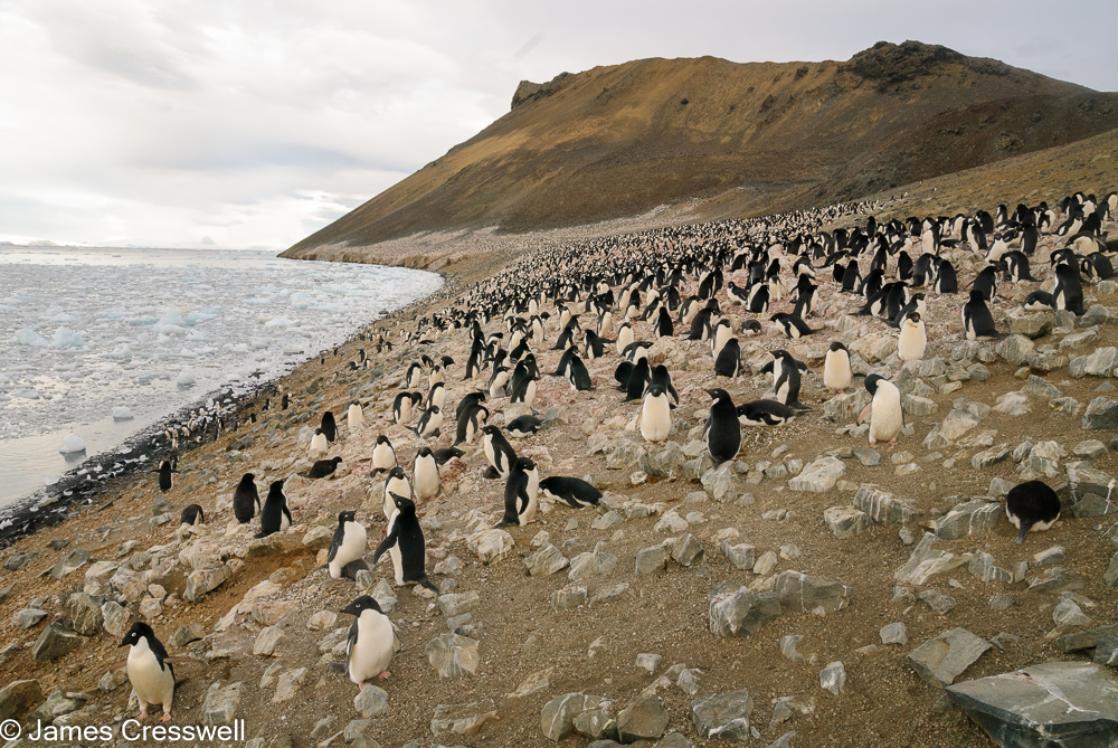 An Adelie penguin colony on Devil Island in the Weddell Sea 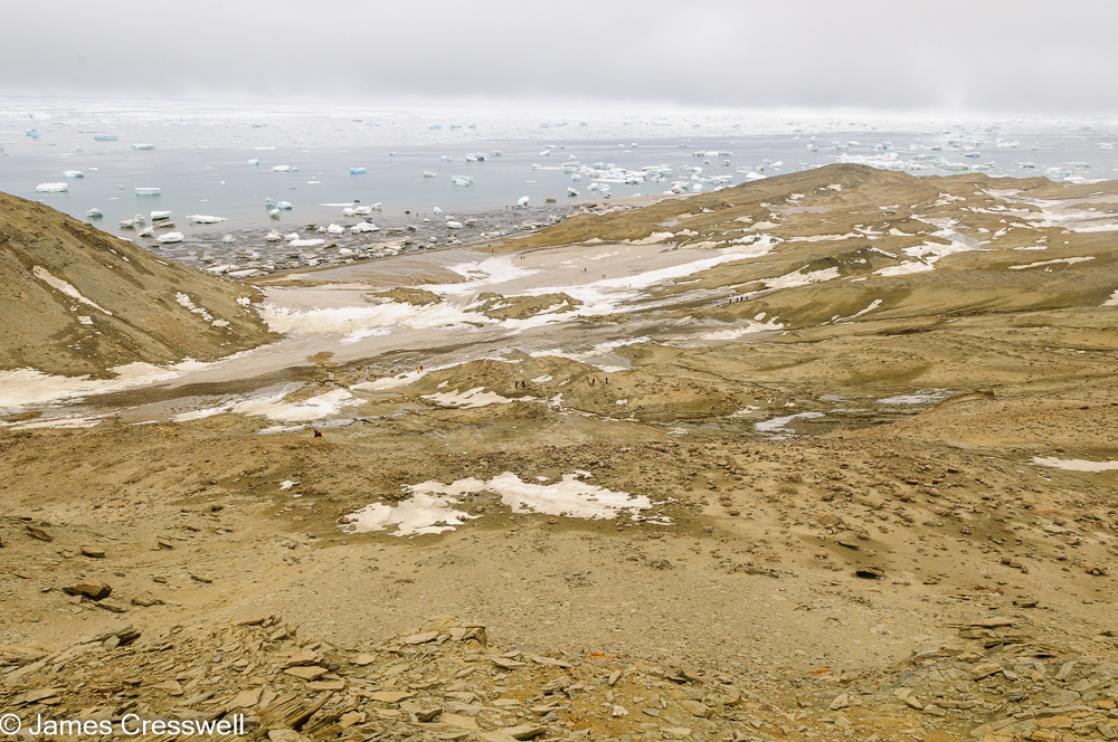 Seymour Island in the  Weddell Sea. This island is usually snow free and is the most important palaeontological site inAntarctica 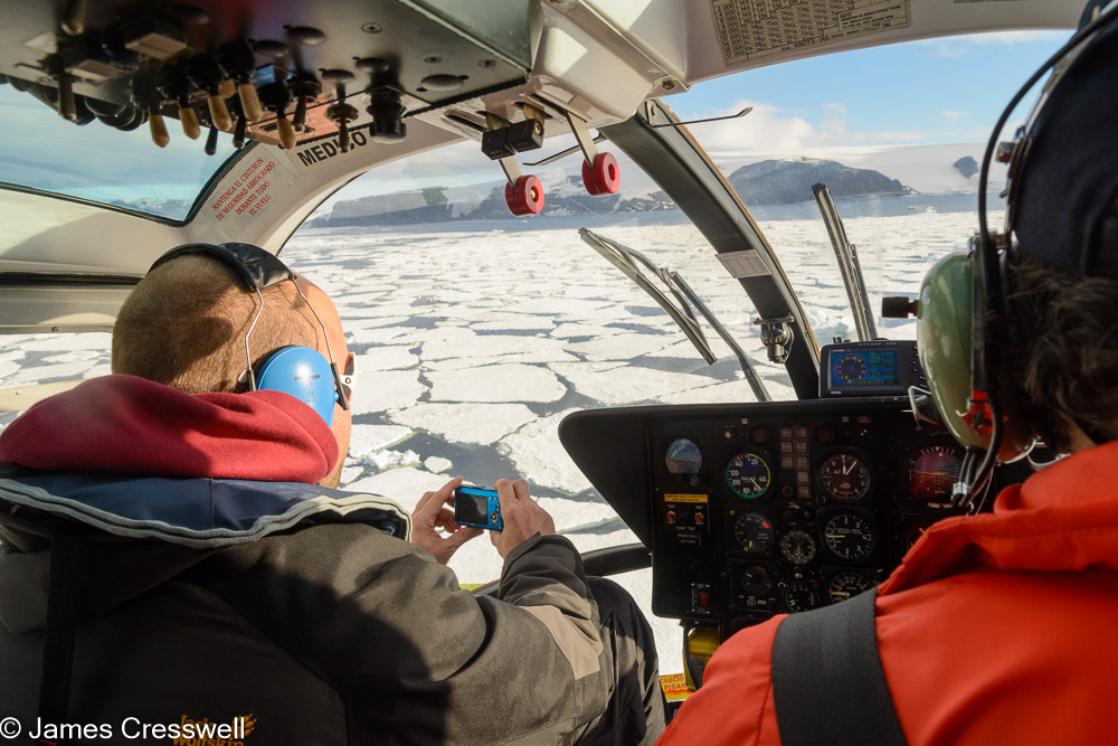 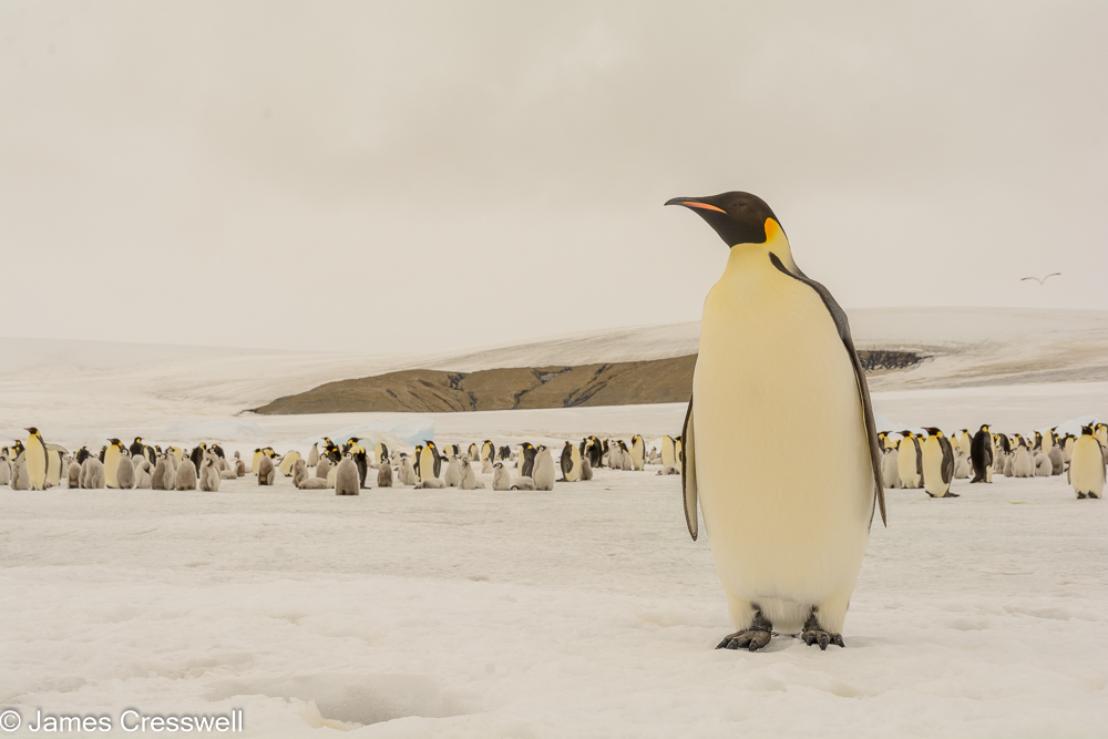 The Snow Hill Emperor Penguin Colony in the Weddell Sea 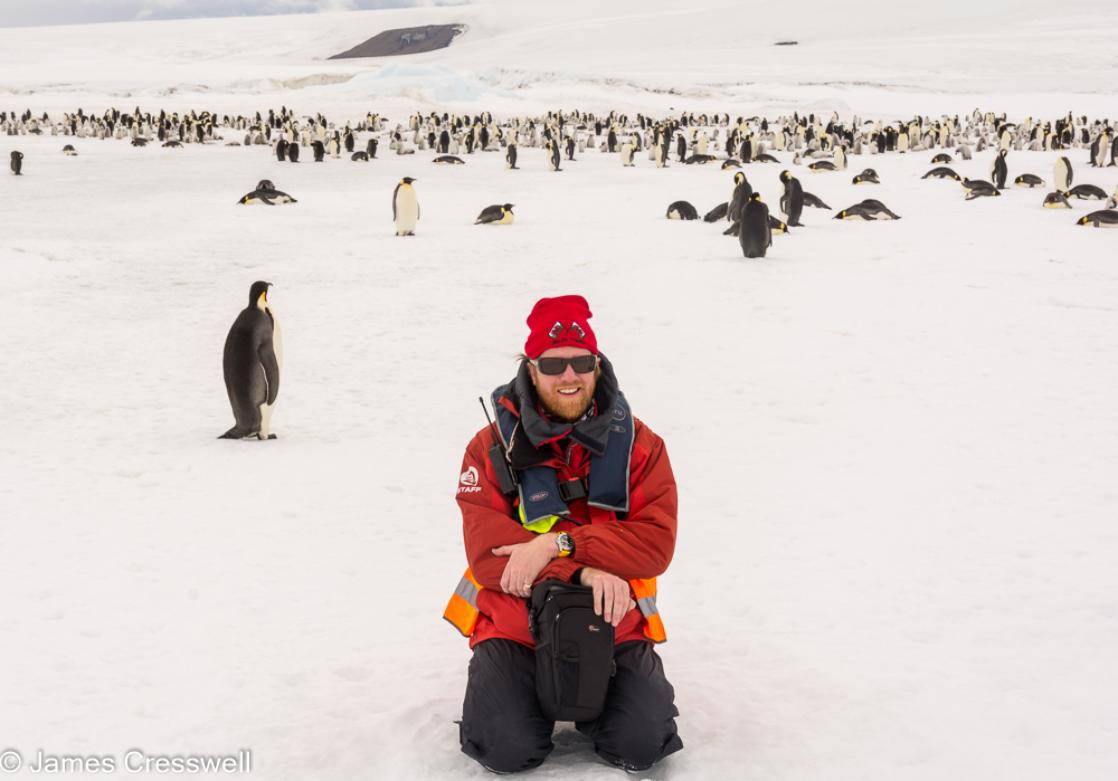 PLEASE NOTE: All itineraries are for guidance only. Programs may vary depending on ice, weather, and wildlife conditions. Landings are subject to site
availabilities, permissions, and environmental concerns per IAATO regulations. Official sailing plans and landing slots are scheduled with IAATO prior to the start of the season, but the expedition leader determines the final plan. Flexibility is paramount for expedition cruises. The average cruising speed of our vessel is 10.5 knots. If ice conditions are favorable and the route to Snow Hill Island is free of multi-year pack ice, you have the chance for ship-to-shore helicopter transfers to Snow Hill Island (roughly 45 minutes walking distance from the emperor penguin rookery). If successful, this is a once-in-a-lifetime experience. But please remember that nature writes the final itinerary out here: Attempts to reach Snow Hill Island during the voyages of 2012 – 19 did not always succeed. In 2013 and three years in a row (2017 – 2019) conditions were favorable to land by helicopter on Snow Hill Island and to visit the emperor penguin rookery.

Day 2 - 3: Path of the polar explorers
Over the next two days on the Drake Passage, you enjoy some of the same experiences encountered by the great polar explorers who first charted these regions: cool salt breezes, rolling seas, maybe even a fin whale spouting up sea spray. After passing the Antarctic Convergence – Antarctica’s natural boundary, formed when north-flowing cold waters collide with warmer sub-Antarctic seas – you are in the circum-Antarctic upwelling zone. Not only does the marine life change, the avian life changes too. Wandering albatrosses, grey-headed albatrosses, black-browed albatrosses, light-mantled sooty albatrosses, cape pigeons, southern fulmars, Wilson’s storm petrels, blue petrels, and Antarctic petrels are a few of the birds you might see.

Day 4 - 7: Entering Antarctica
You may sail into the Weddell Sea via the Antarctic Sound. Here huge tabular icebergs herald your arrival to the eastern side of the Antarctic Peninsula. During this part of the cruise, the search is on for emperor penguins. Using both the vessel and helicopters, there’s a good chance you’ll find them. You might also enjoy scenic flights, and if conditions allow, helicopter landings in locations otherwise out of reach this time of year.

Helicopter flights are a true trip changer, and may include:

The west slopes of the Antarctic Sound – The western side of this area is only rarely seen from the air, though the landscape is truly worth the flight: Layered sandstones, lava flows, glaciers, icebergs, and pack-ice extend as far as the eye can see. There are often individual emperor penguins and Adélie penguins on the ice floes, as well as kelp gulls, skuas, and various breeds of petrel. Jagged mountain peaks stab through the snow, and enormous walls of ice lie shattered on the slopes below.

Duse Bay – A soaring helicopter flight may deposit you on a rocky hillock close to an old refuge hut overlooking this bay. There’s still a lot of snow and ice this time of year, but much of the walk in this location is over frost shattered rock covered with lichen of all shapes and colors. Seymour Island – This is where the Swedish Antarctic Expedition of 1901 – 4 wintered under harrowing polar conditions. Sedimentary rock, fossils, and expansive views define this location.

If conditions allow for deeper ventures into the Weddell Sea, Zodiac trips may include:

Devil Island – Home to a large colony of Adélie penguins, this island offers a magnificent vantage point for hikers willing to foot it to the top of the hill. Melting ice sometimes forms a waterfall dropping from the cliffs close to Cape Well-met.

Gourdin Island – Chinstrap, gentoo, and Adélie penguins love this island, which is yet another landing option for your continuing Antarctic adventure.

Esperanza Base – This Argentine research station, which operates year-round and is one of only two civilian settlements in Antarctica, could serve as an alternative landing site.

Day 8: Drake via Deception Island
In the morning, you sail to Deception Island for the last landing of the voyage, either at Pendulum Cove or Whalers Bay. Conditions on the Drake Passage determine the exact time of departure.

Day 5 - 6: (Alternate program if the route to Snow Hill Island is free of multi-year pack ice – less than 50 % probability)
Helicopters provide an advantage in reaching the emperor penguin colony, but nature makes the rules in Antarctica. If conditions are favourable, you’ll spend the first two days at the penguin rookery. The helicopter operation takes a full day, and the flight duration is approximately 15 minutes. Each helicopter can accommodate 4 – 6 passengers per flight, and the landing site is carefully chosen so that the penguins are not disturbed. Upon arrival to the site, it is about a 45-minute walk to the rookery. Please keep in mind that you are in the world’s most remote area: There are no guarantees. Conditions may change rapidly, which can have a profound impact on our helicopter operations. It is important to understand and respect this. Safety is our greatest concern, and no compromises can be made.

(+ additional amount for helicopter flights, which is still being calculated)