During the days at sea the chances of meeting whales are high. Witness the northbound spring migration of northern birds like Arctic Terns and Long-tailed Skuas who join us in crossing the Equator (“the Line”). 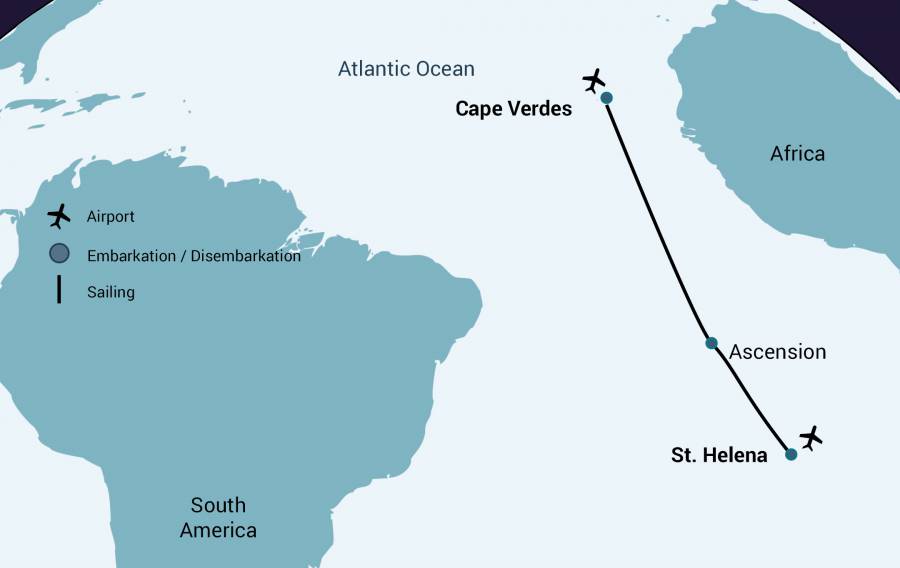 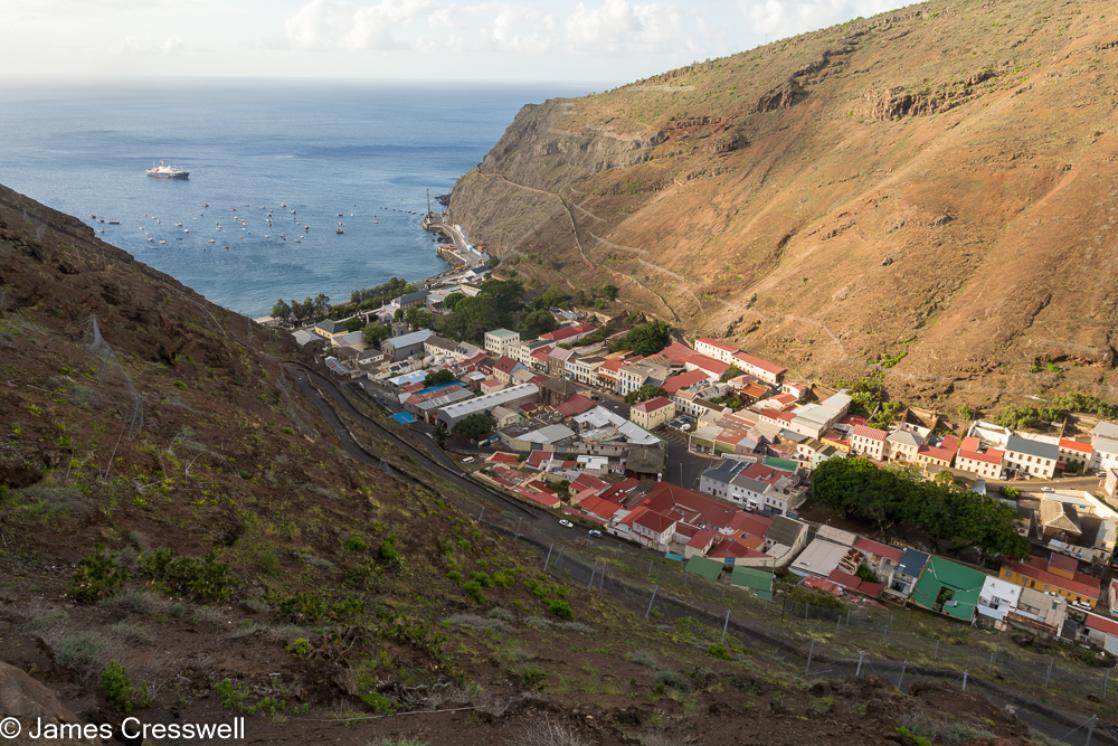 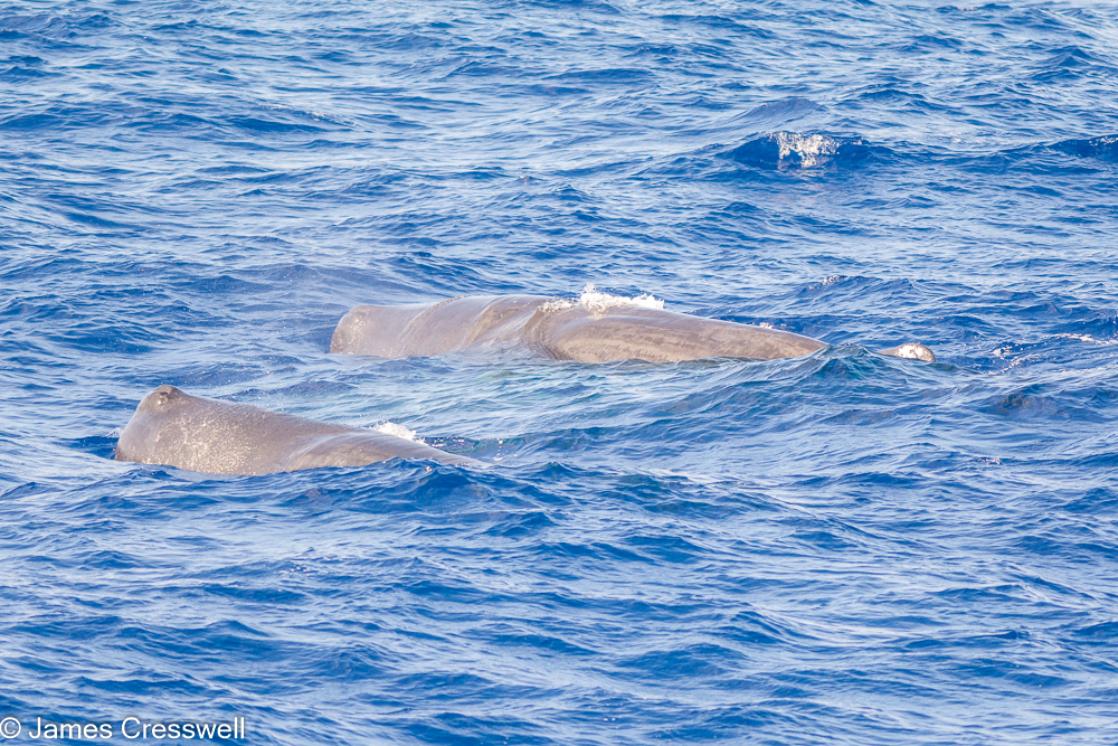 Two sperm whales resting at the surface after a deep dive, seen in the open ocean to the north of Saint Helena 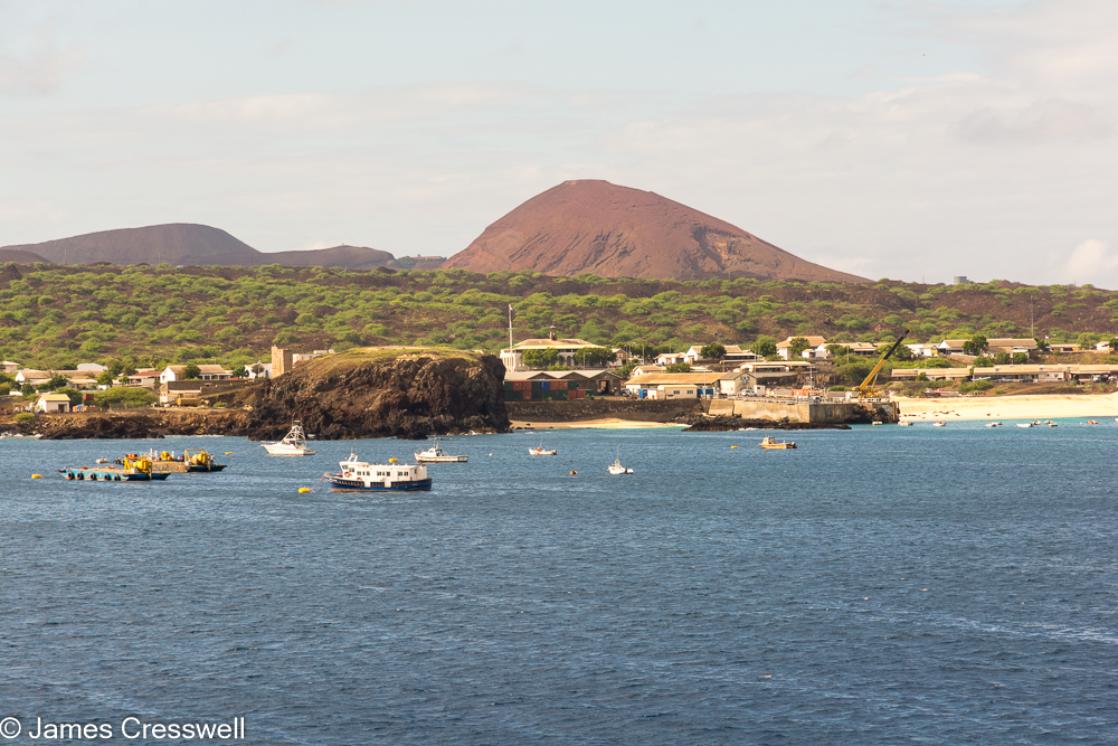 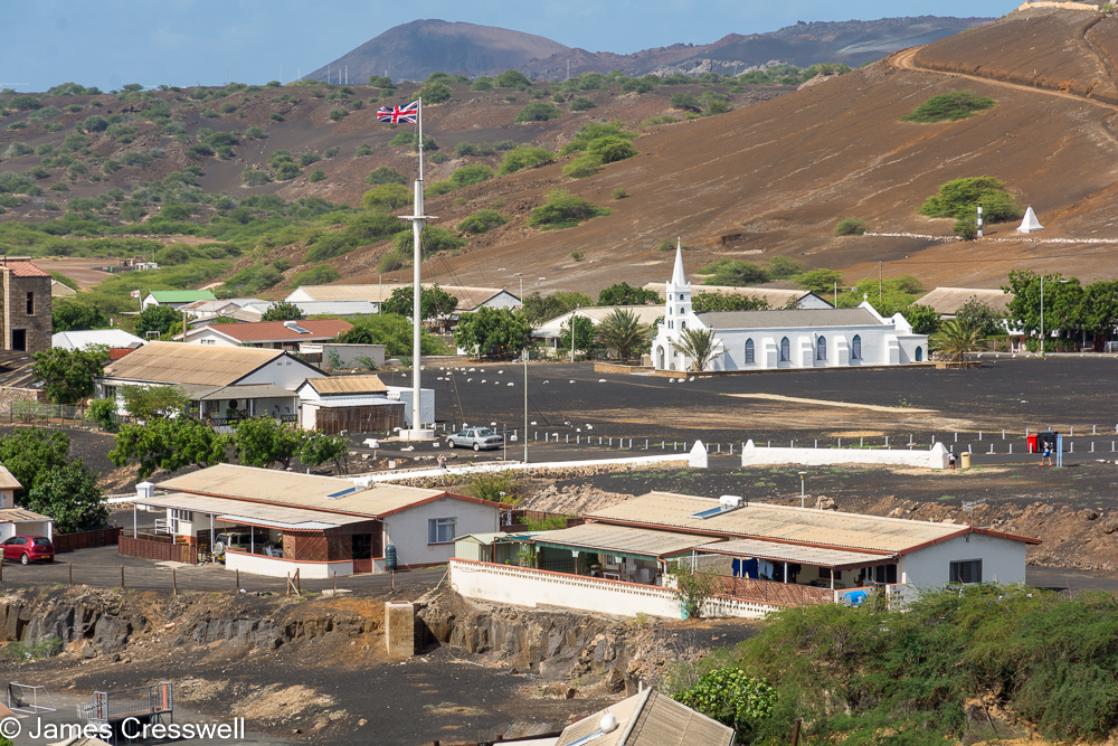 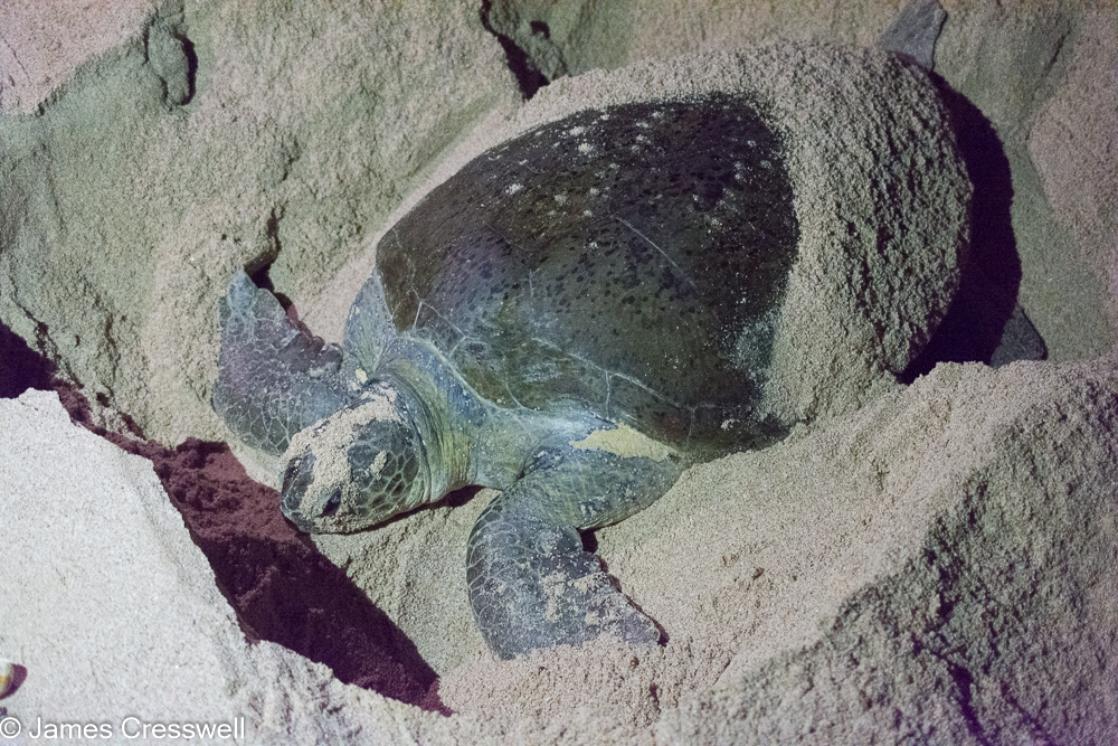 A green turtle laying eggs. Ascension Island is a great place to see green turtles laying their eggs at night. 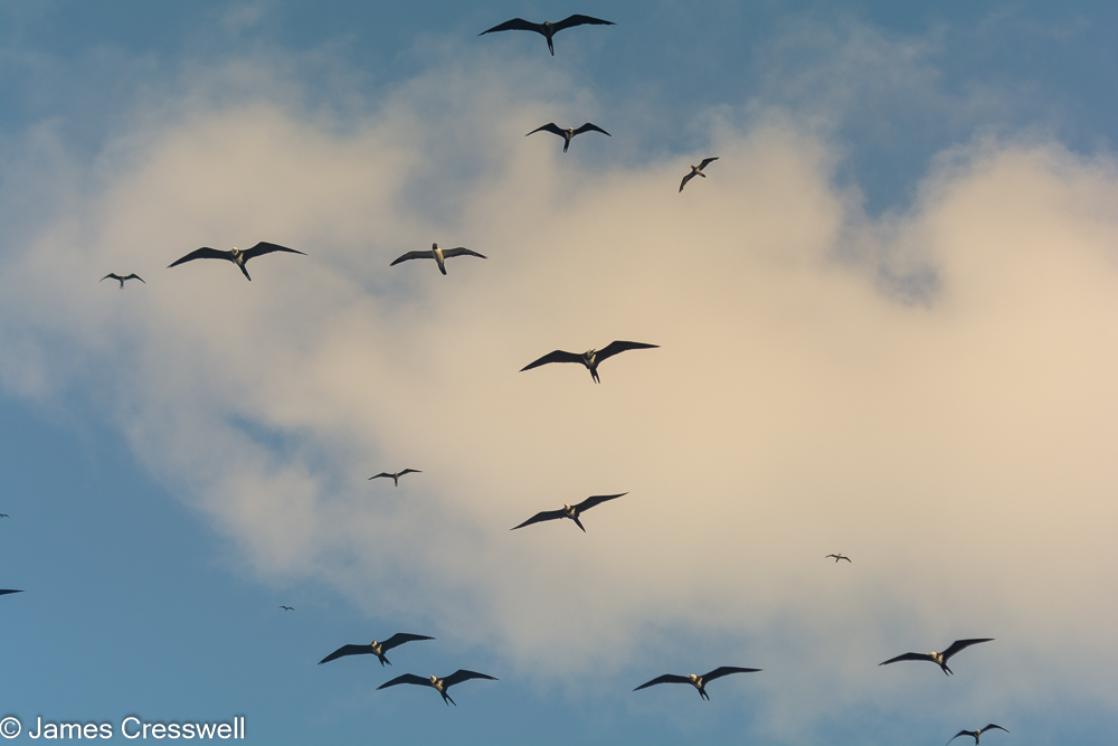 Frigate birds patrolling the skies near to Ascension Island 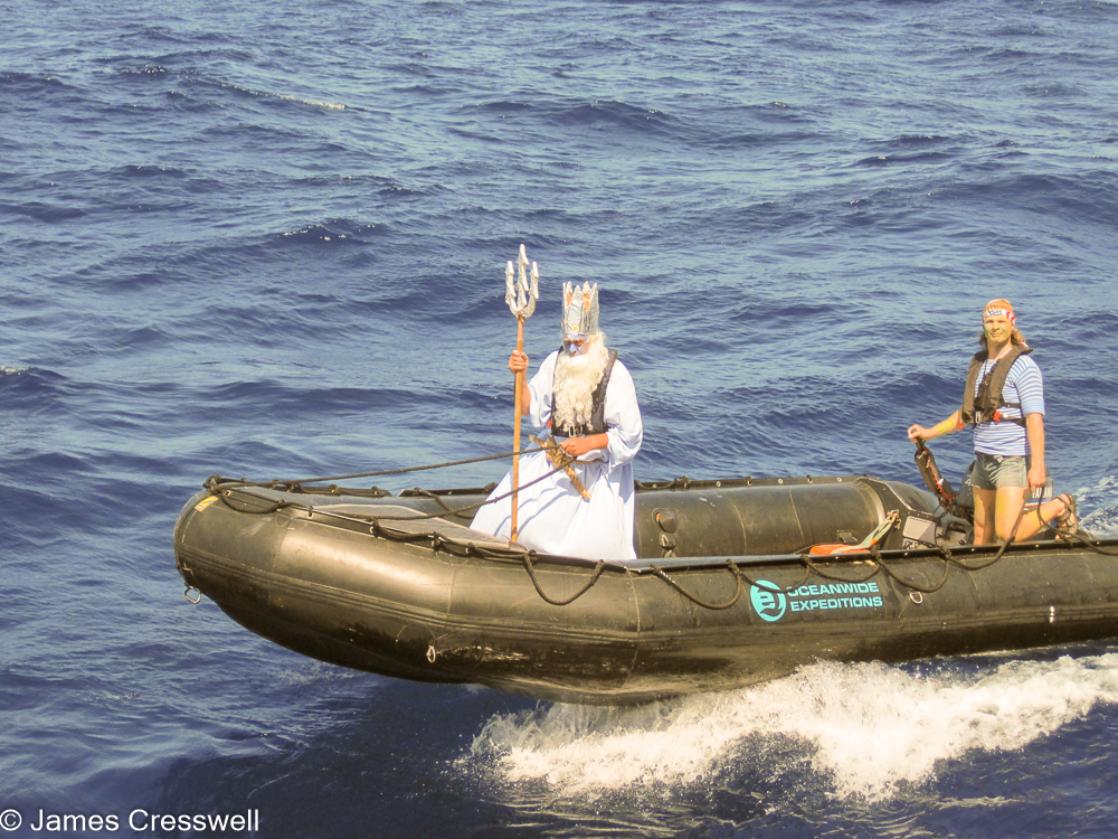 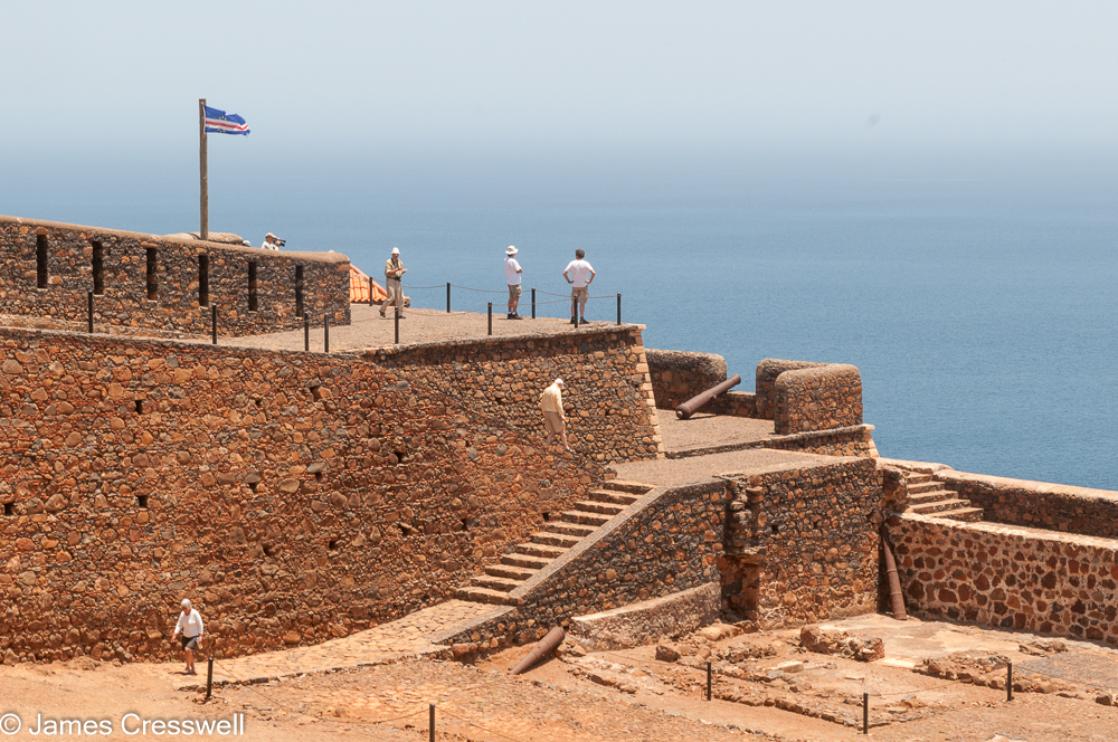 The fortress at Cidade Velha a UNESCO World Heritage Site on the island of Santiago, Cape Verde Islands 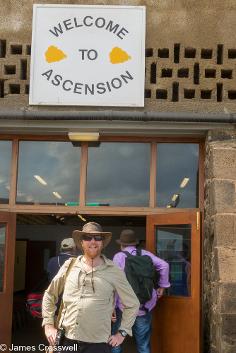 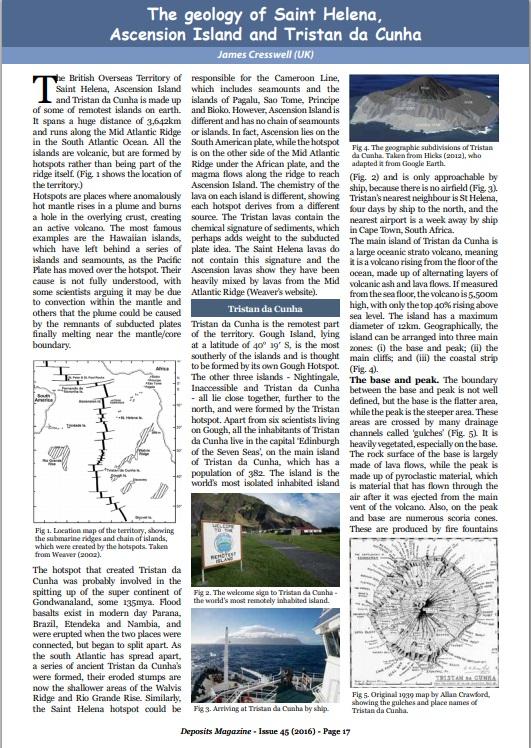 PLEASE NOTE: All itineraries are for guidance only. Programs may vary depending on local ice and weather conditions and in order to take advantage of opportunities to see wildlife. The on-board expedition leader determines the final itinerary. Itineraries may mention places that require permission to land, which must be granted by the relevant national authorities. Such permission is not granted prior to the publishing of these itineraries. Flexibility is paramount for expedition cruises. The average cruising speed of m/v Janssonius 10.5 knots.

Day 1: Heading out of Helena
Our voyage starts in Jamestown, a uniquely situated city that offers much to see before we set sail. Enjoy the local British culture, tropical climate, and endemic birds of this remote volcanic island. You can visit Longwood House, where Napoleon died in 1821, and even walk the 699-step Jacob’s Ladder if you feel ambitious. If you have more time, you can also go on small hikes or snorkeling in the shallows, seeing multitudes of tropical and subtropical fish.

Day 2 – 3: Sailing the Mid-Atlantic Ridge
Today we aim to sail along the Mid-Atlantic Ridge, the sprawling submarine mountain range that runs about 16,000 km (10,000 miles) from the Arctic Ocean toward the southern tip of Africa. Join us for stargazing on the aft deck, where we will show you the many highlights of the equatorial sky. Weather permitting, these celestial wonders can be seen with binoculars or even with the naked eye.

Day 4 – 5: Onward to Ascension Island
This dry volcanic island is a major home for sooty terns (also known as wideawakes), whose colony here sometimes grows to over a million breeding pairs. You may get the chance to hike up to the richly vegetated summit of the island, and we might also visit the beach to watch green turtles laying eggs.

Day 6 – 9: Crossing the equator
Joining us across the equator are Arctic terns and long-tailed skuas flying their northbound spring migration. At this stage of the voyage, we will hope for good weather as we attempt more stargazing on deck, observing how the polar star becomes visible on the northern horizon.

Day 10: The pleasures of Praia
We will disembark in the town of Praia, on Cape Verde’s Santiago Island, at 9:00 hours*. If you are flying out on the night of April 24/April 25, we offer an additional tour in and around Praia. Here you can visit the historic Cidade Velha and its massive hillside fortress, built to defend against English raiders. Other sights include the oldest Christian church in the tropics as well as the slave whipping post in the main square. You can also simply explore the streets of Praia, enjoying the folk music spilling out of tavern windows.

*Disembarking passengers will have access to hotel rooms where you can collect your luggage and freshen up before traveling to the airport or back to your hotel, if you are staying longer in Praia.

During the voyage described above, we will travel in both the Southern and Northern Hemispheres, assembling on the aft deck to observe how stars and constellations change as we travel north. Southern constellations like the Southern Cross, with its so-called “jewel box” of stars, will be visible if the weather permits. We might also see the large globular cluster, Omega Centauri, as well as the Magellanic Clouds, which are “satellite clouds” of our own galaxy, first reported by Portuguese explorer Ferdinand Magellan in 1521.

As we sail north across the Atlantic, new constellations will appear over the northeastern horizon. Weather and time permitting, we also intend to climb the hill at Saint Helena Island, where English astronomer Edmond Halley (discoverer of Halley’s Comet) investigated the southern sky and described nearly 400 stars in their constellations during the 17th century. When we cross the equator, you will notice the moon looks different in its phases in the Southern Hemisphere as opposed to the Northern. Some of the stars we will look for, like Epsilon Eridani, have planets around them, which can inspire discussions about the likelihood of extraterrestrial life. We will offer optional workshops in astronomical navigation with sextants during our sea days. These fascinating workshops are limited in the number of people who can participate, however, and reservations are required. You can practice calculating a position at sea while also learning about the Huygens clock, Mercator projection, and other related topics. In addition, we will provide a workshop about astrophotography (also limited, reservations required) that will focus on the photography you can do with your own equipment. The focus on board will be the theoretical background and image-processing techniques, since conditions on a moving ship will most likely not allow astrophotography. But if weather and time allow, we may practice some photography on Saint Helena.