Both of these voyages are in fact the same length, however the time zone difference and crossing the International Date Line makes them appear to be different

A truly epic voyage that takes you to both the Ross Sea, where helicopters are required to make landings, and to the Antarctic Peninsula. Sail to the southern parts of the Antarctic Peninsula, Peter I Island, the Bellingshausen and Amundsen Seas into the Ross Sea. Visiting the Ross Ice-shelf, Dry Valleys, McMurdo Station, Macquarie Island, Campbell Island and the historic huts of Scott and Shackleton. 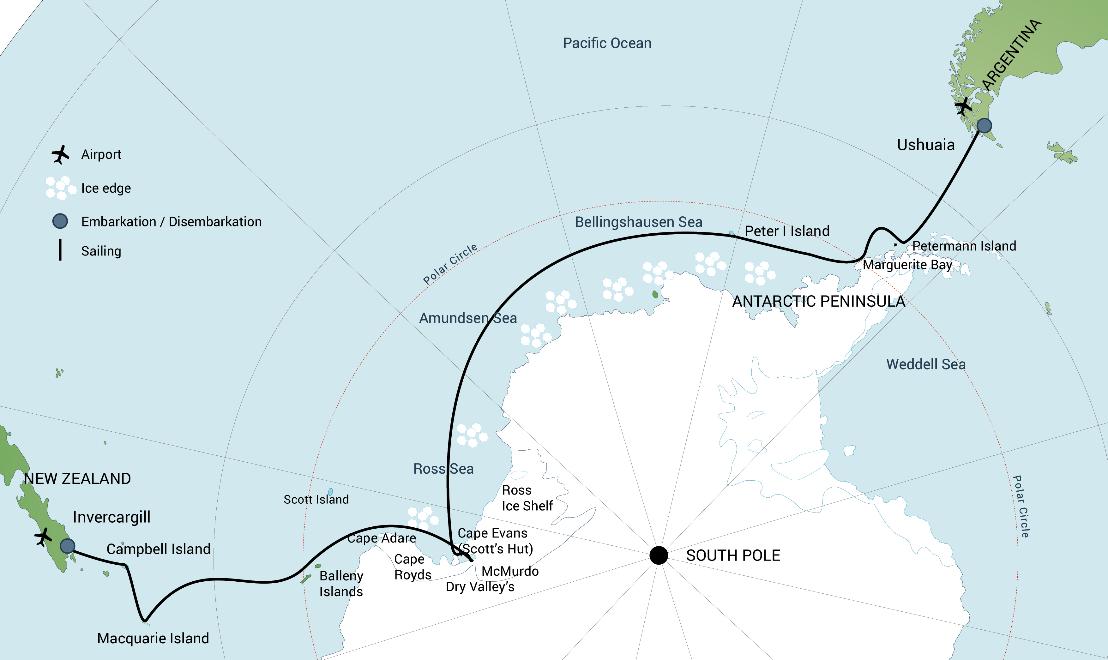 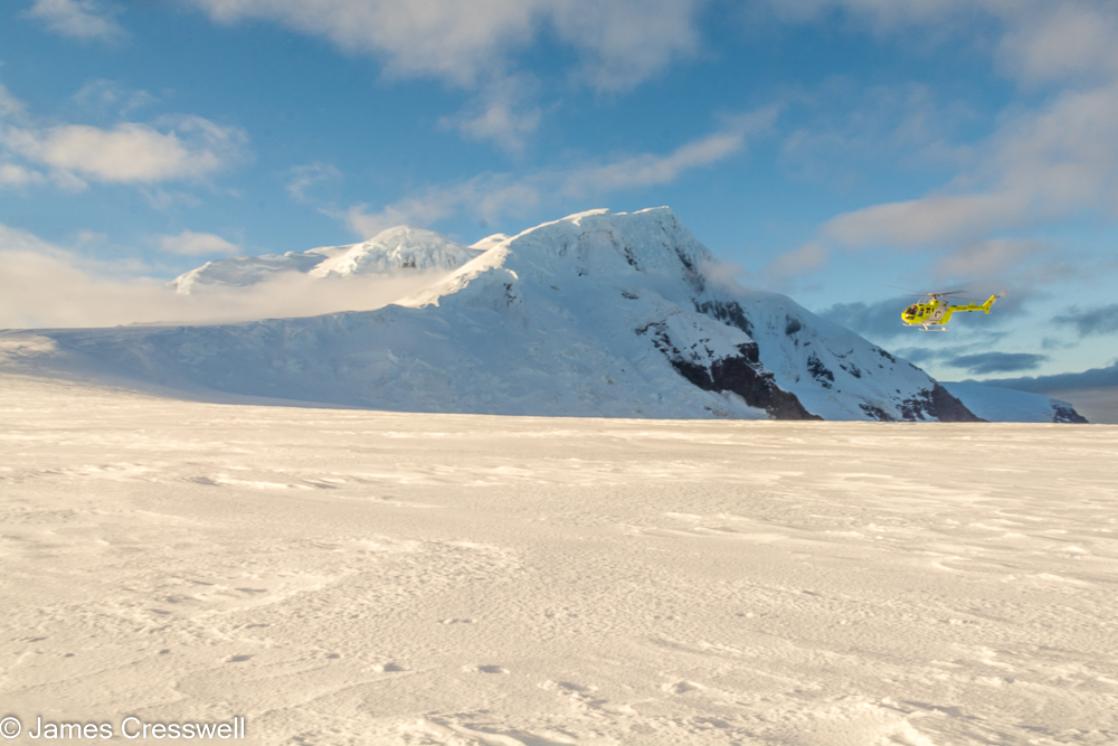 A helicopter landing on the rarely visited Peter I island, an uninhabited volcanic island in the Bellingshausen Sea, 450 kilometres (280 mi) from the coast of Ellsworth Land 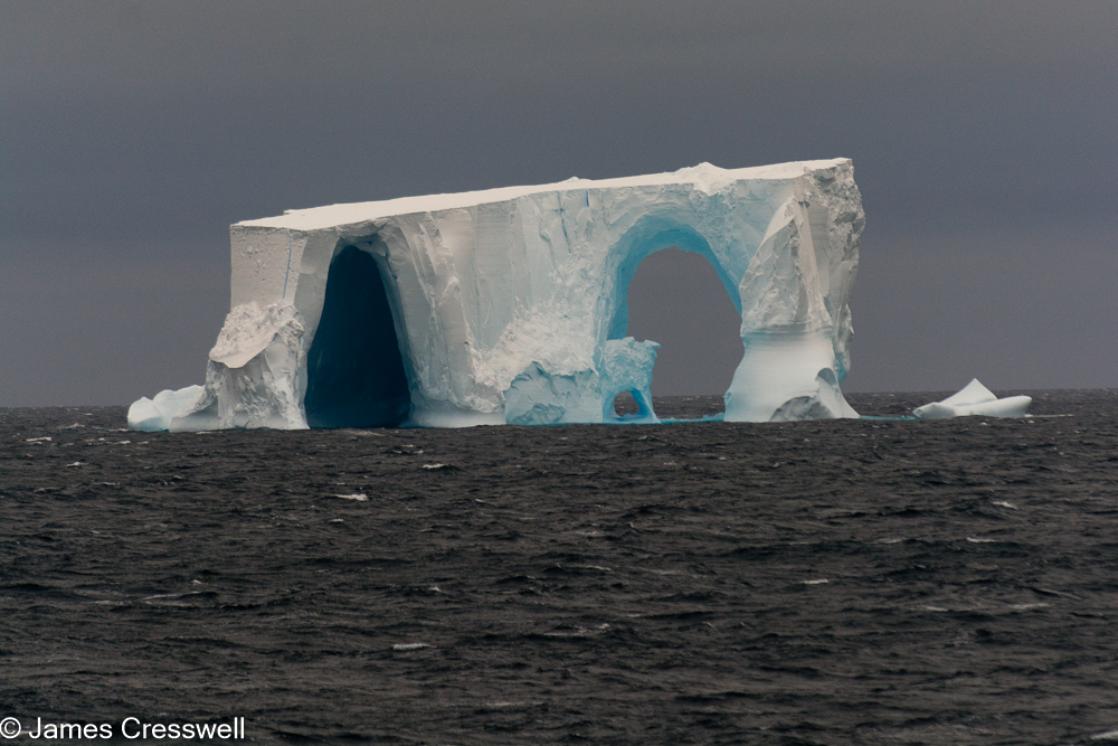 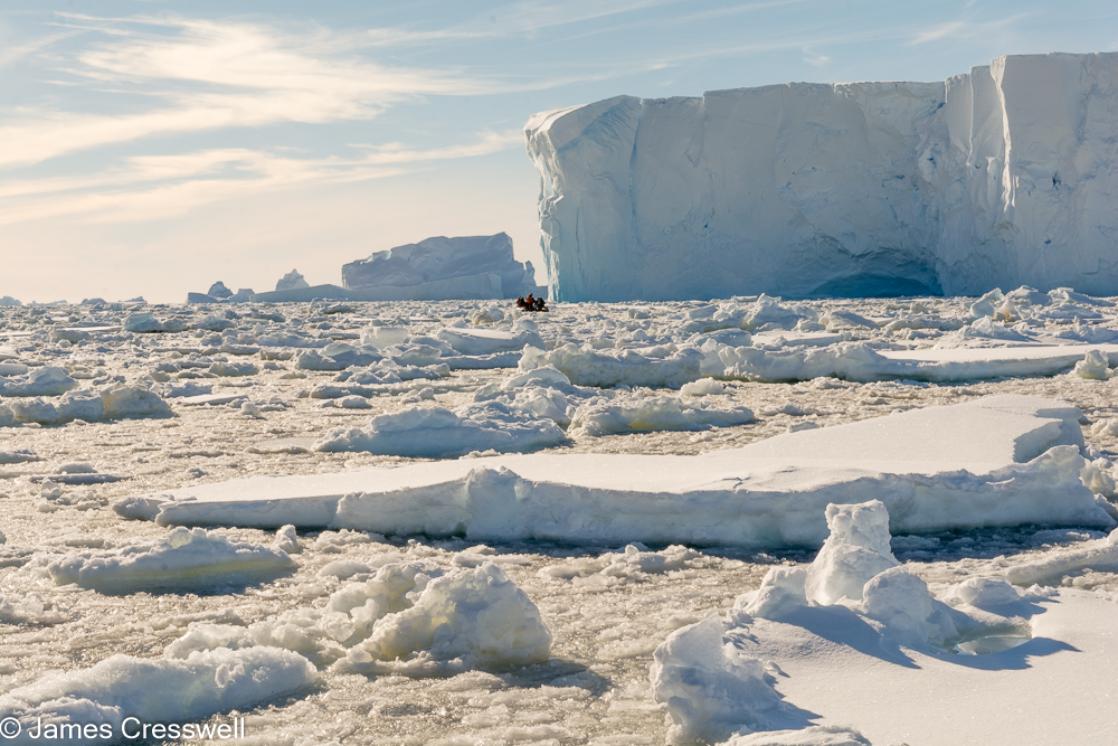 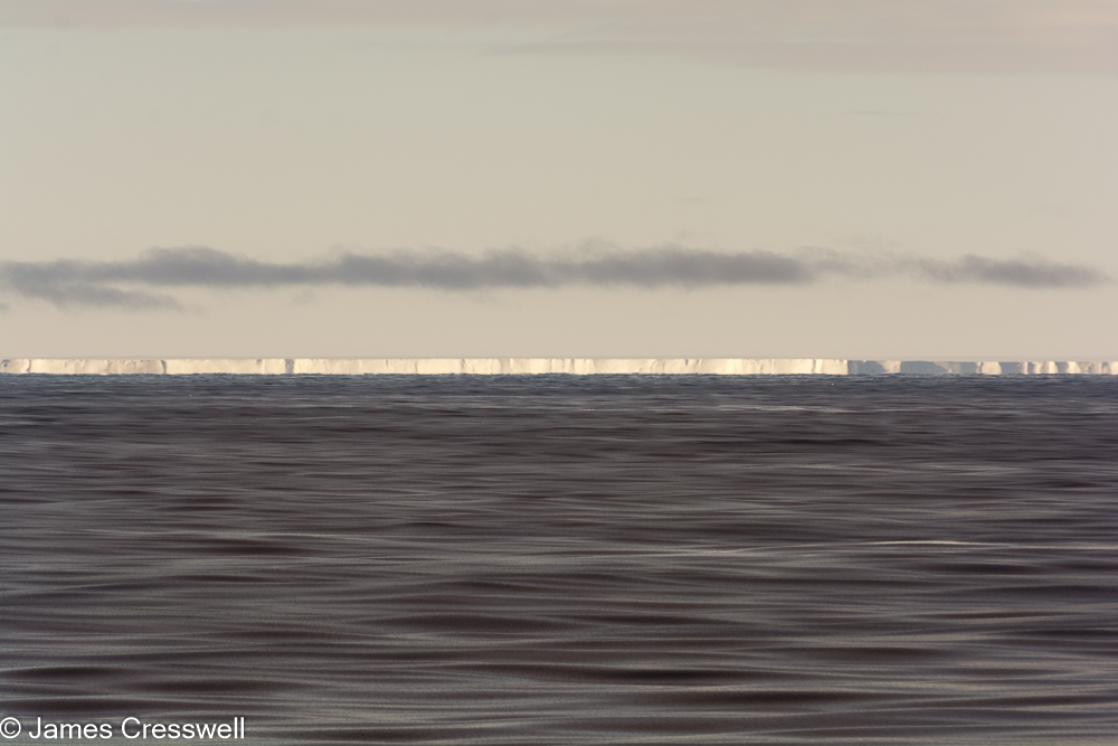 The Ross Ice Shelf, in the Ross Sea is the largest ice shelf in the world 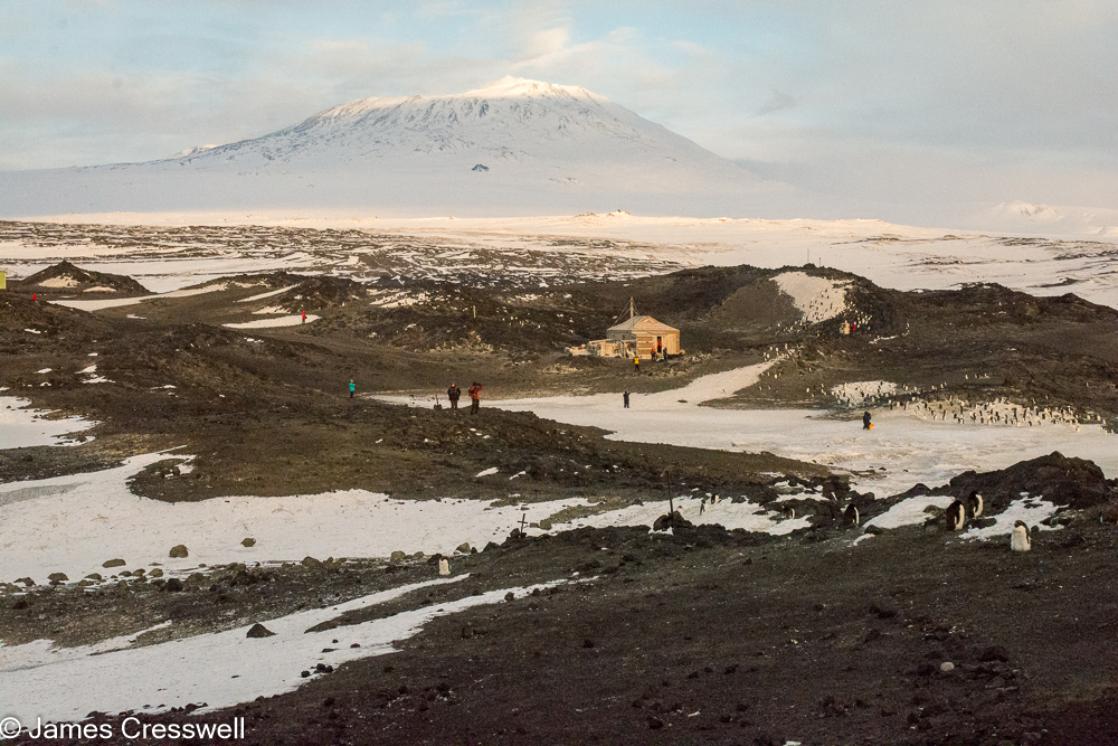 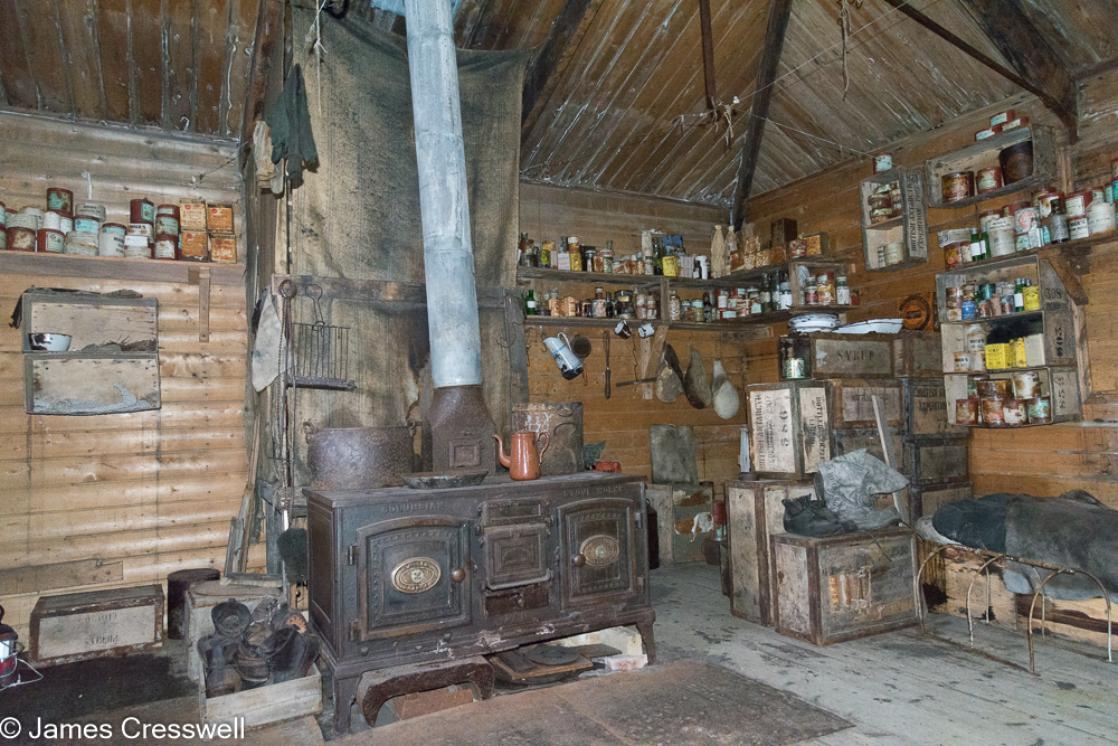 Inside Shackleton's hut at Cape Royds 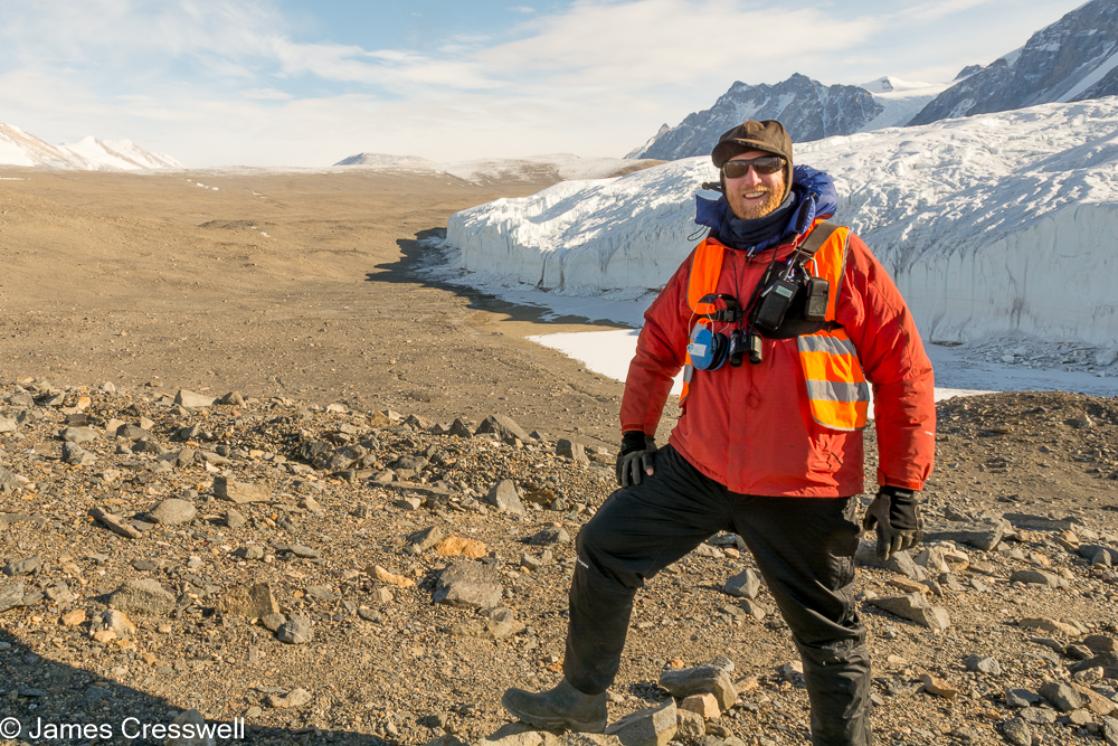 James in front of the Canada Glacier, in the Taylor Valley, McMurdo Dry Valleys 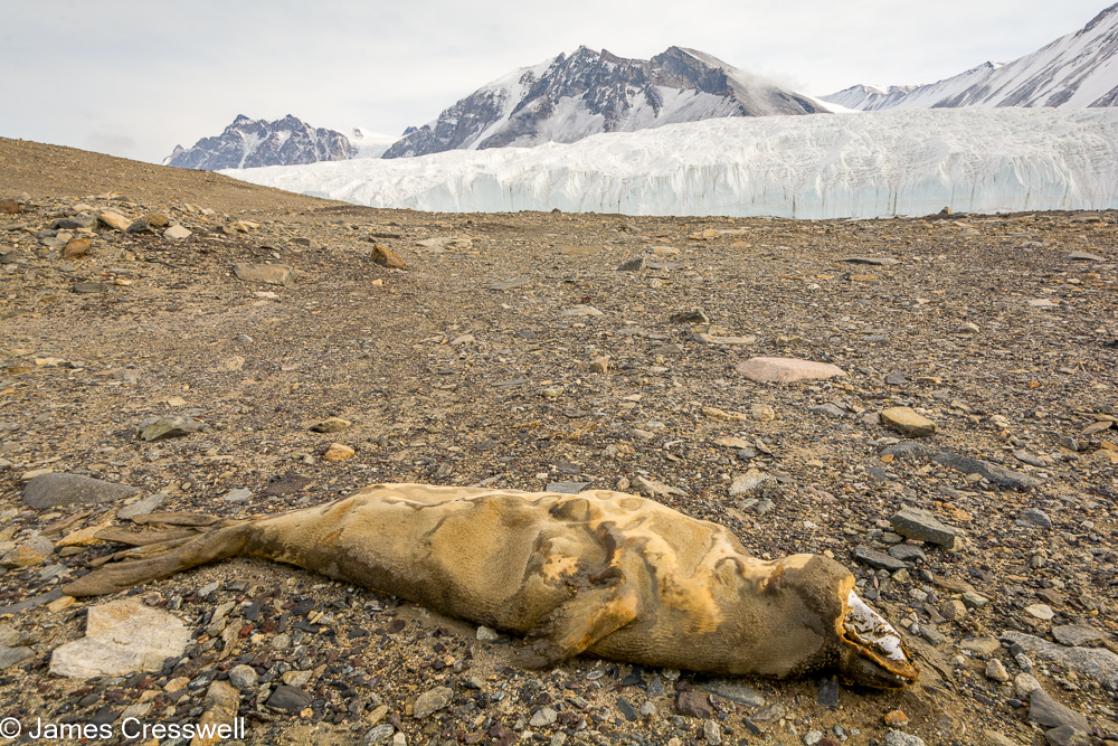 A mummified crabeater sealin front of the Canada Glacier, in the Taylor Valley, McMurdo Dry Valleys 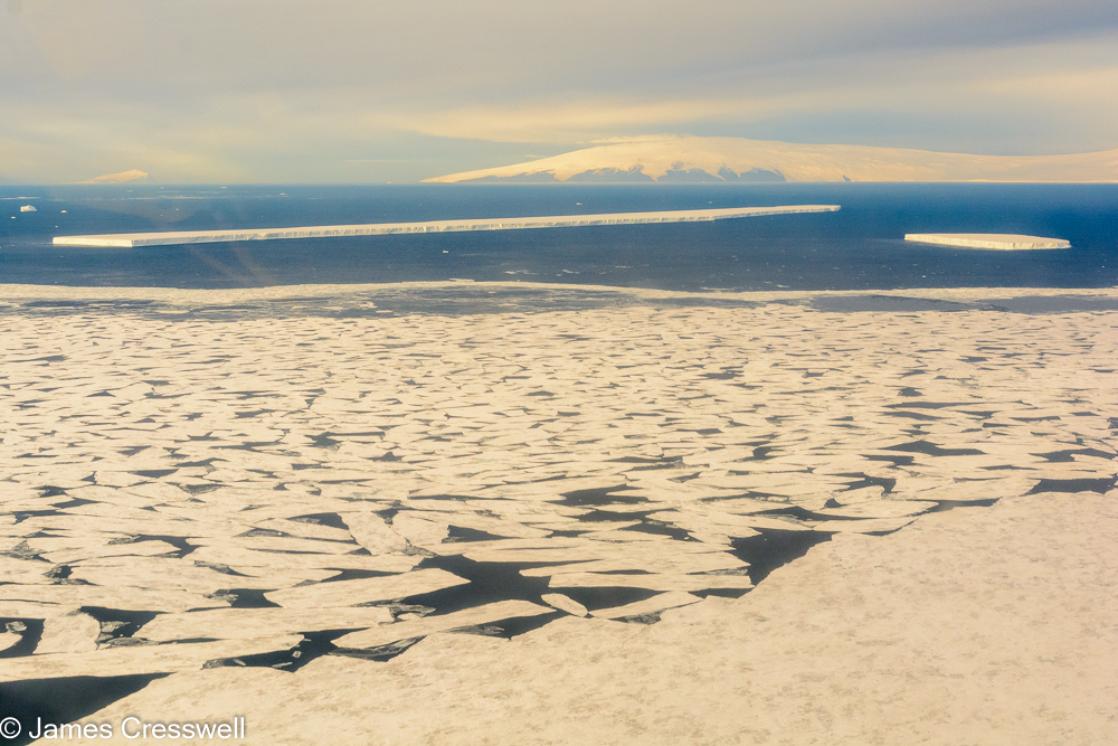 A view from the helicopter returning to the ship from the McMurdo Dry Valleys, looking over McMurdo Sound in the Ross Sea with sea ice, icebergs and Mt Bird volcano on Ross Island in the background 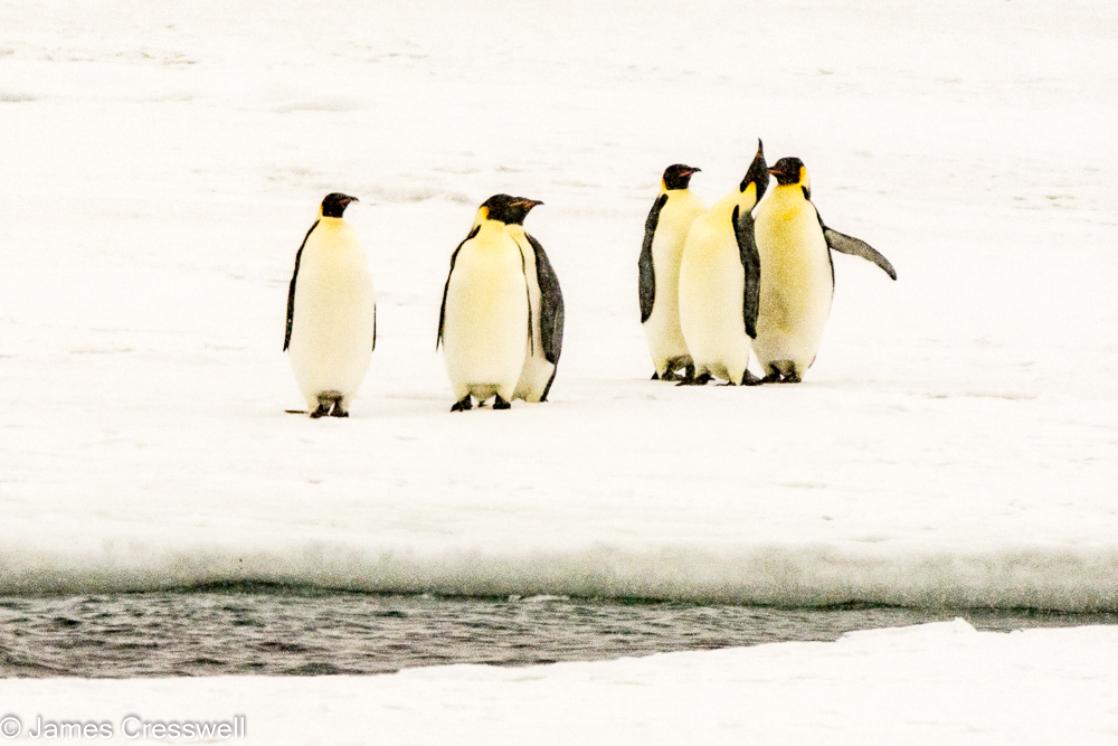 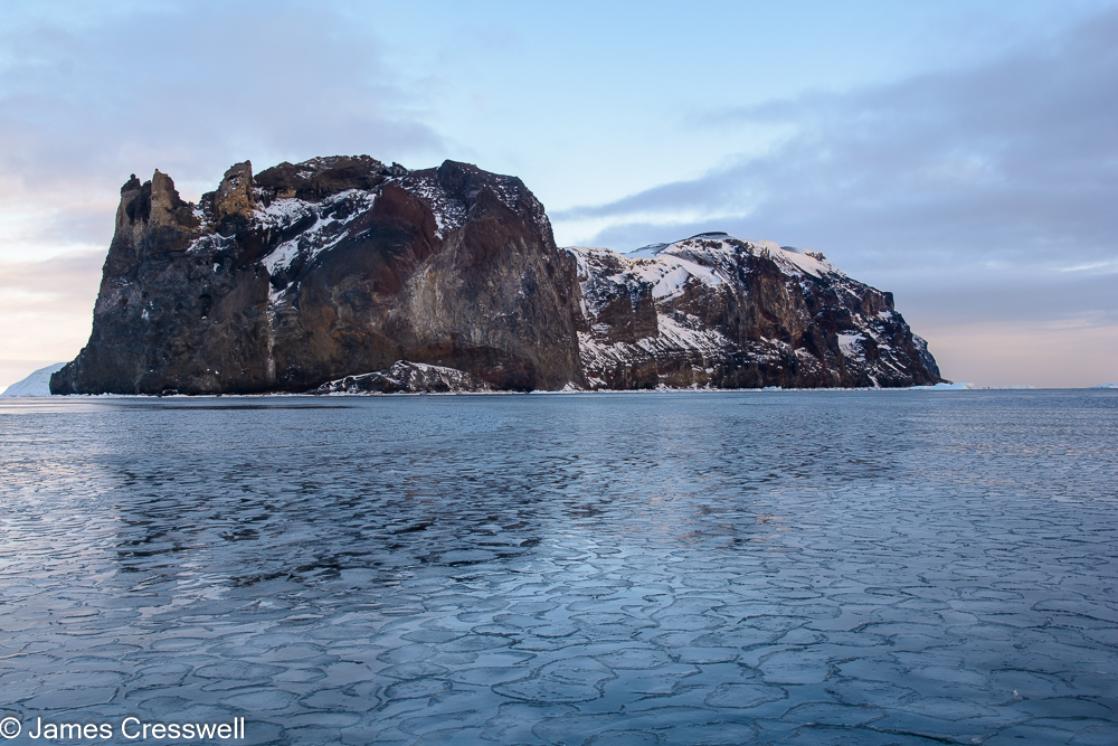 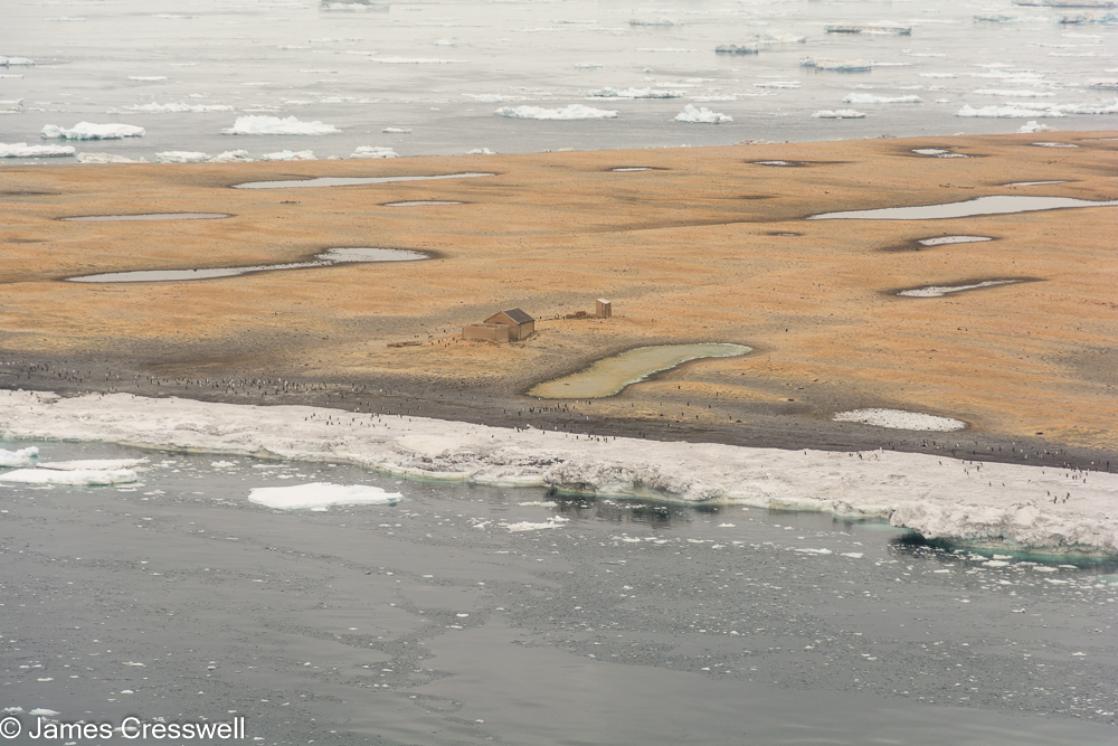 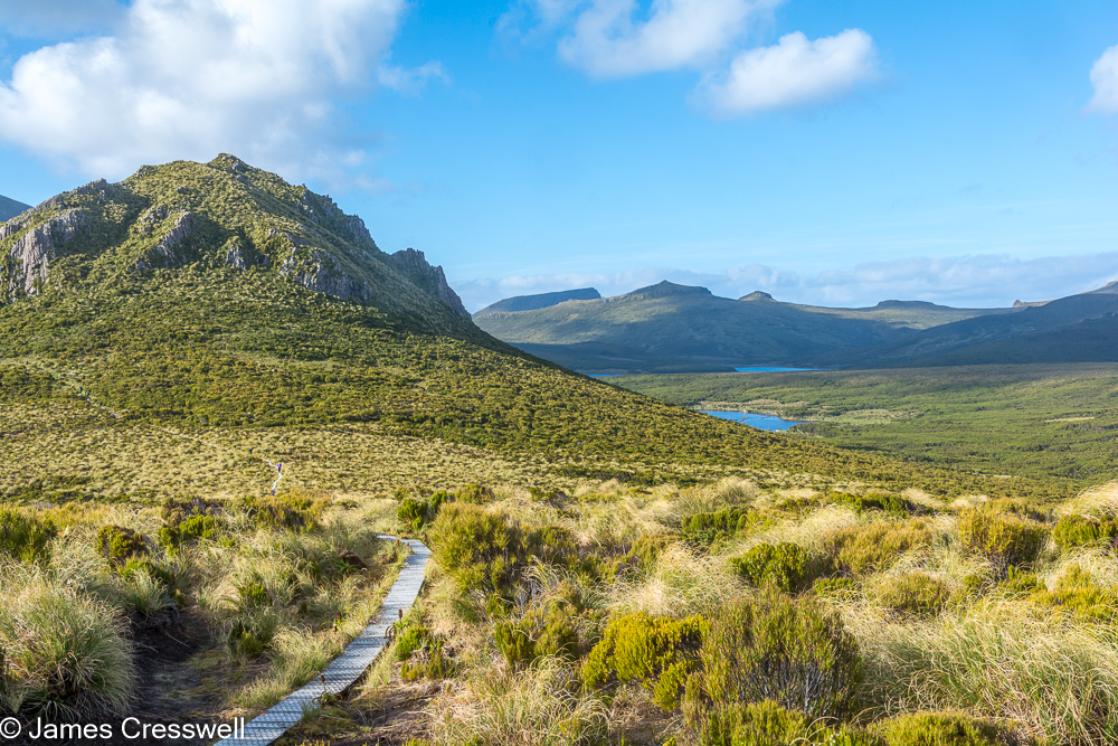 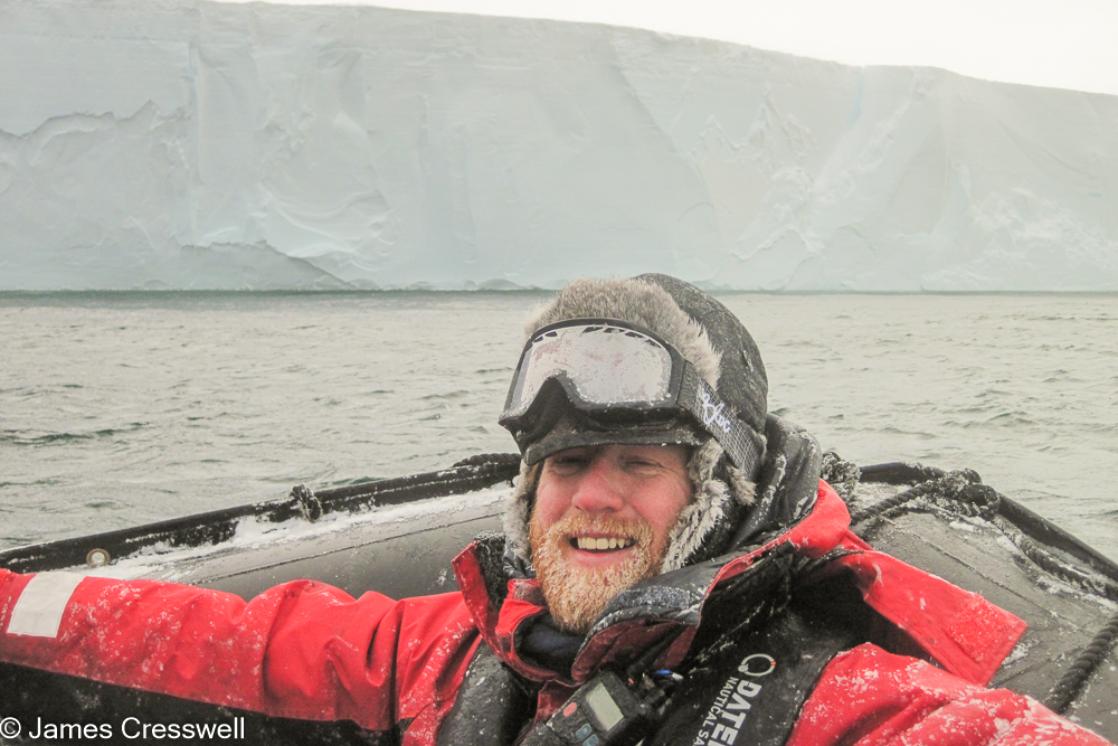 James in the Bay of Whales in the Ross Ice Shelf, the most southerly point of sea in the world

PLEASE NOTE: All itineraries are for guidance only. Programs may vary depending on local ice and weather conditions and in order to take advantage of opportunities to see wildlife. Landing permits for Macquarie Islands and / or Campbell Islands and / or Mc Murdo Station may have limitations and are subject to approval and changes may occur; additional sites such as Balleny Islands and additional time in the Ross Sea may be offered as an alternative. The on-board expedition leader determines the final itinerary. Itineraries may mention places that require permission to land, which must be granted by the relevant national authorities. Such permission is not granted prior to the publishing of these itineraries. Flexibility is paramount for expedition cruises. The average cruising speed of m/v Ortelius is 10.5 knots. During these voyages, we transfer our passengers to shore using Zodiacs. We also operate our two helicopters in sites where Zodiacs cannot be used. Potential areas for helicopter transfer are Cape Evans (the location of Scott’s hut), Cape Royds (the location of Shackleton’s hut), the Ross Ice Shelf, Peter I Island, and the Dry Valleys. Our plan is to make five helicopter-based landings, though a specific amount of helicopter time cannot be guaranteed in advance. Helicopters provide us a great advantage in reaching certain landing sites that are otherwise almost inaccessible, but this is a true expedition in the world’s most remote area: weather, ice, and other forces of nature dictate the final itinerary. Conditions may change rapidly, impacting helicopter operations. Please understand and accept this. Safety is our greatest concern, and no compromises can be made. The vessel is equipped with two helicopters. If one helicopter is unable to fly for whatever reason, helicopter operations will cease or be cancelled. One helicopter always needs to be supported by a second functioning helicopter. No guarantees can be given, and in no event will claims be accepted. Special note: Crossing the International Date Line Depending on which direction one travels across the International Date Line, a day is either lost or gained. (Crossing westward, a day is gained; crossing eastward, a day is lost.) Please take note of this when calculating your actual time travelled. The days listed in the itinerary duration reflect the actual time travelled.

Day 4: Through the Pendleton Strait
You arrive at the Antarctic Peninsula near the Antarctic Circle in the afternoon. If sea ice allows it, you can then continue through Pendleton Strait and attempt a landing at the rarely visited southern tip of Renaud Island. Here you have the opportunity to see the first Adélie penguins of the trip as well as enjoy spectacular views of the icebergs in this surreal, snow-swept environment.

Day 5 – 6: Sailing the Bellingshausen Sea
From the peninsula you head toward the open sea, your course set for Peter I Island.

Day 7: A rare glimpse of Peter I Island
Known as Peter I  Øy in Norwegian, this is an uninhabited volcanic island in the Bellingshausen Sea. It was discovered by Fabian von Bellingshausen in 1821 and named after Peter the Great of Russia. The island is claimed by Norway and considered its own territory, though it is rarely visited by passenger vessels due to its exposed nature. If weather and ice conditions allow, you may enjoy a helicopter landing on the glaciated northern part of the island. This is a unique chance to land on one of the most remote islands in the world.

Day 8 – 14: Sights of the Amundsen Sea
You then sail through the Amundsen Sea, moving along and through the outer fringes of the pack ice. Ice conditions are never the same from year to year, though we aim to take advantage of the opportunities that arise if sea ice is present. Emperor penguins, groups of seals lounging on the ice floes, orca and minke whales along the ice edge, and different species of fulmarine petrels are possible sights in this area.

Day 15 – 17: The epic Ross Ice Shelf
The next goal is to enter the Ross Sea from the east, venturing south toward the Bay of Whales and close to Roosevelt Island (named in 1934 by the American aviator Richard E. Byrd for President Franklin D. Roosevelt). The Bay of Whales is part of the Ross Ice Shelf, the largest ice shelf in the world, and is constantly changing with the receding ice masses. Large icebergs are present here, along with great wildlife opportunities. Roald Amundsen gained access to the shelf en route to the South Pole, which he reached on December 14, 1911. Also, the Japanese explore Nobu Shirase had his camp in this area in 1912, at Kainan Bay. You may make a helicopter landing on the ice shelf if conditions allow. During this part of the voyage, we will also cross the International Date Line.

Day 18 – 20: Highlights of the Ross Sea
Keeping to the Ross Sea, your aim is now to visit Ross Island. In this location you can see Mount Erebus, Mount Terror, and Mount Byrd, as well as many other famous spots that played an important role in the British expeditions of the last century: Cape Royds, where Ernest Shackleton’s cabin still stands; Cape Evans, where the cabin of Robert Falcon Scott can still be seen; and Hut Point, from which Scott and his men set out for the South Pole.

If ice is blocking the way but weather conditions are favorable, you may use the helicopters to land in one or more spots in this area. The American scientific base of McMurdo Station and New Zealand’s Scott Base are other possible locations you might visit. From McMurdo Station you could also make a 10-km hike (6 miles) to Castle Rock, where there are great views across the Ross Ice Shelf toward the South Pole. Additionally, you may make a helicopter landing in Taylor Valley, one of the Dry Valleys, where conditions are closer to Mars than anywhere else on Earth.

Day 21 – 22: Exploring the inexpressible
Sailing north along the west coast of the Ross Sea, you pass the Drygalski Ice Tongue and Terra Nova Bay. If ice conditions allow, you then land at Inexpressible Island, which has a fascinating history in connection to the less-known Northern Party of Captain Scott’s expedition. It is also home to a large Adélie penguin rookery. Should sea ice prevent entry into Terra Nova Bay, you may head farther north to the protected area of Cape Hallett and its own Adélie rookery.

Day 23: The residents of Cape Adare
You next attempt a landing at Cape Adare, where for the first time humans wintered on the Antarctic Continent: The Norwegian Borchgrevink stayed in here 1899, taking shelter in a hut that to this day is surrounded by the largest colony of Adélie penguins in the world.

Day 25: The windswept Balleny Islands
Your intended route is past Sturge Island in the afternoon, getting an impression of these windswept and remote islands before crossing the Antarctic Circle.

Day 26 – 28: Sailing among the seabirds
You once again enter the vast expanse of the Southern Ocean. Seabirds are prolific on this leg, during which we hope to enjoy good weather conditions.

Day 29: Macca aka Macquarie Island
Macca, also known as Macquarie Island, is a Tasmanian State Reserve that in 1997 became a World Heritage Site. The Australian Antarctic Division has its permanent base on this island, which Australian sealer Frederick Hasselborough discovered while searching for new sealing grounds. The fauna on Macquarie is fantastic, and there are colonies of king, gentoo, and southern rockhopper penguins – as well as almost one million breeding pairs of the endemic royal penguin. Elephant seals and various fur seal species, such as the New Zealand fur seal, are also present.

Day 31: Campbell Island’s bounteous birdlife
The plan today is to visit the sub-Antarctic New Zealand Reserve and UNESCO World Heritage Site of Campbell Island, enjoying its luxuriantly blooming vegetation. The fauna on Campbell Island is also a highlight, with a large and easily accessible colony of southern royal albatrosses on the main island. Breeding on the satellite islands are wandering, Campbell, grey-headed, black-browed, and light-mantled albatrosses. There are also three breeding penguin species present: eastern rockhopper, erect-crested, and yellow-eyed penguins. In the 18th century, seals in the area were hunted to extinction, but the elephant seals, fur seals, and sea lions have since recovered.

Day 32: Once more to the Southern Ocean
Take in the vast horizons of your final sea day before you reach New Zealand.

Day 33: Porting in New Zealand
Every adventure, no matter how sublime, must eventually come to an end. You disembark in Bluff, the southernmost town in New Zealand, and return home with memories that will accompany you wherever your next adventure lies.

(+ additional amount for helicopter flights, which is still being calculated)