From fjords to straits to the mighty Monaco Glacier, this scenic and wildlife-centered Arctic voyage explores some of the most dramatic landscapes and animal-viewing hotspots Svalbard has to offer. Between your visits to glaciers, beaches, and berg-strewn bays, you might encounter polar bears, walruses, whales, seals, foxes, and flocks of exotic seabirds. 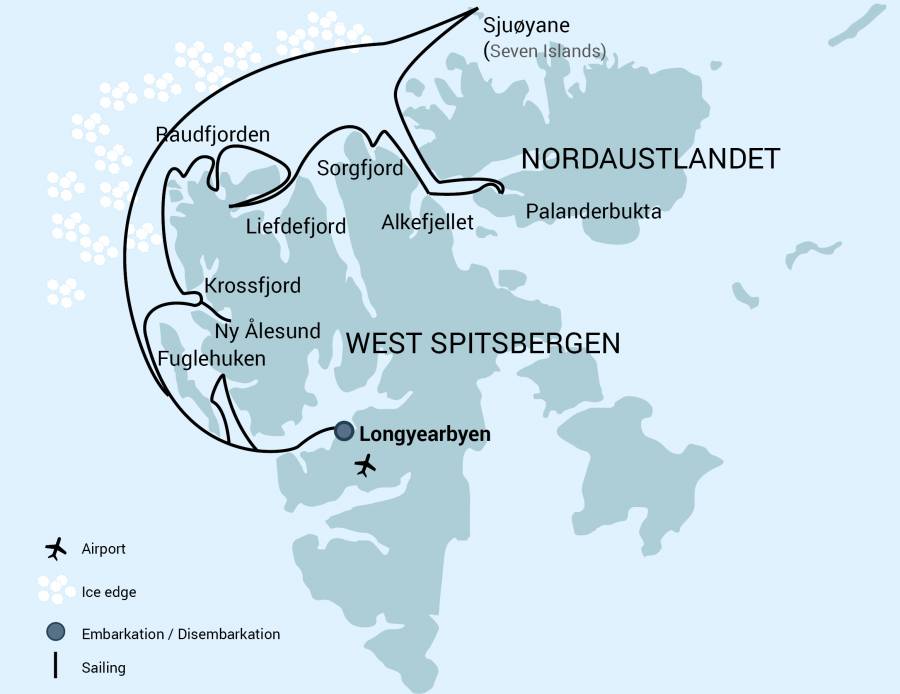 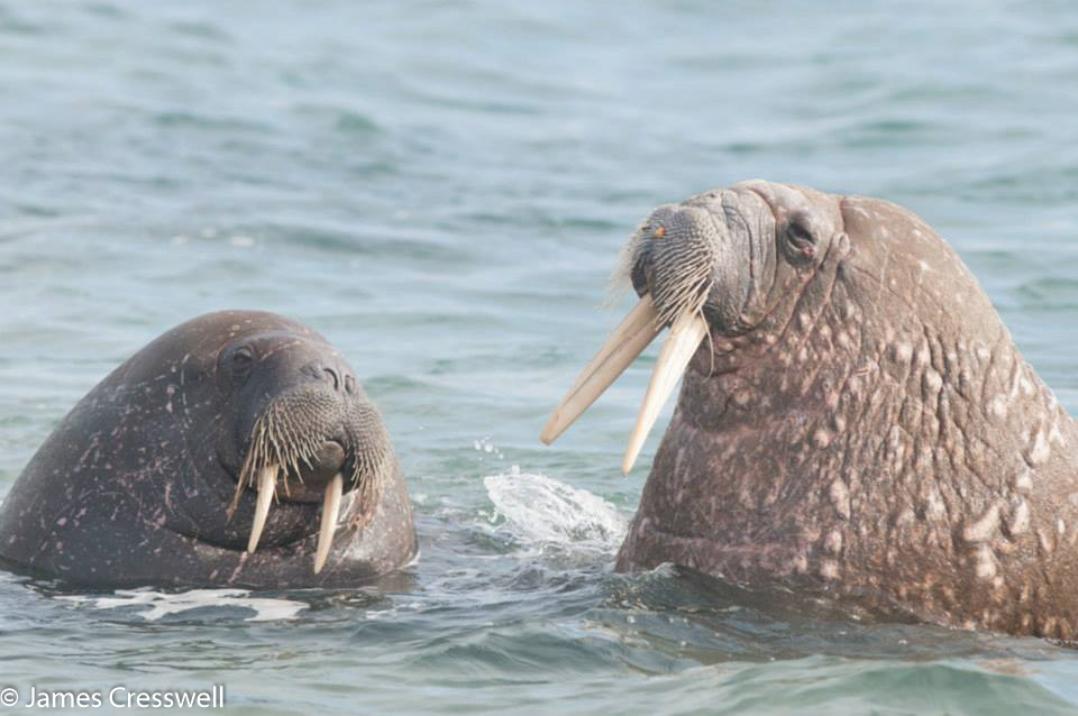 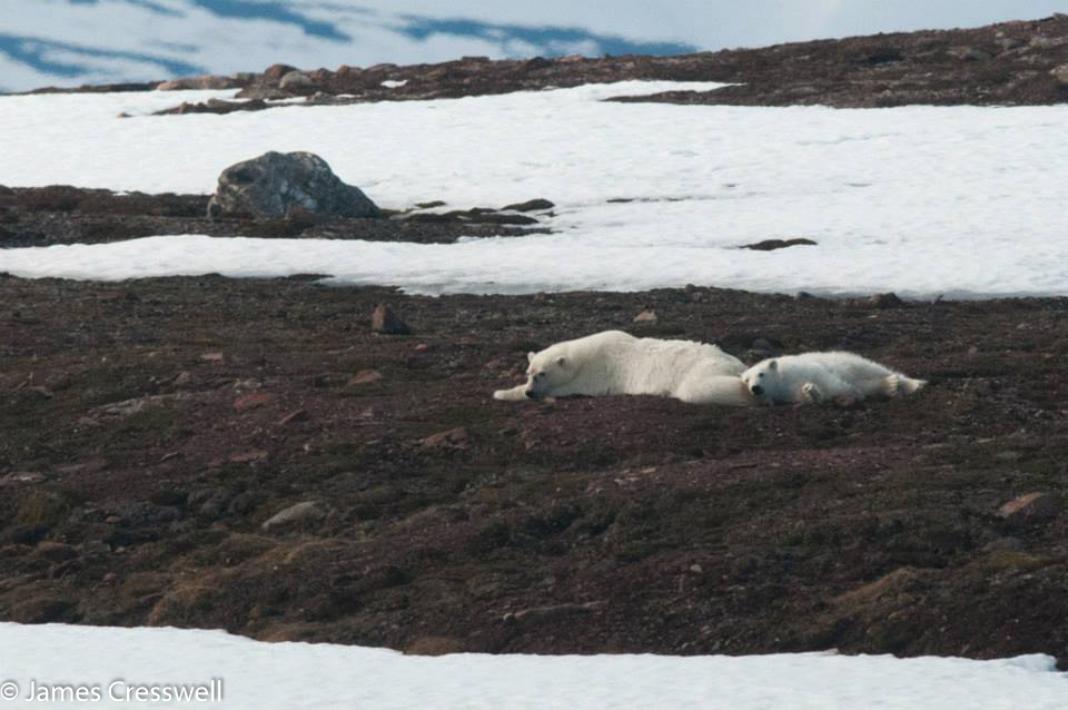 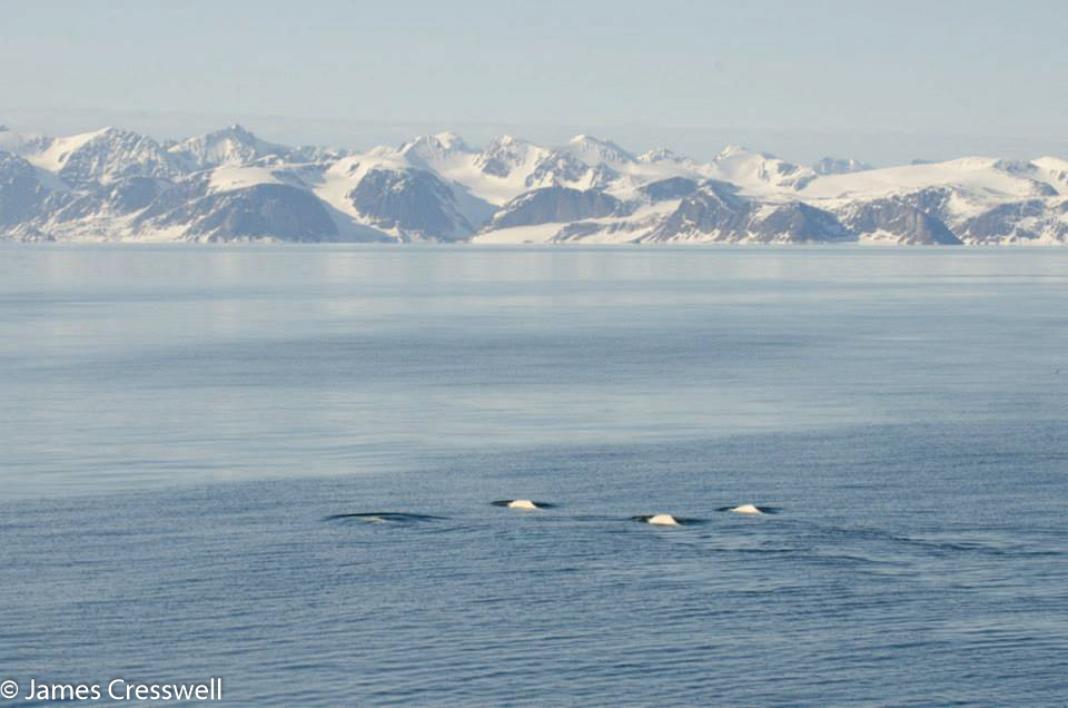 Beluga whales swimming off the coast of Spitsbergen 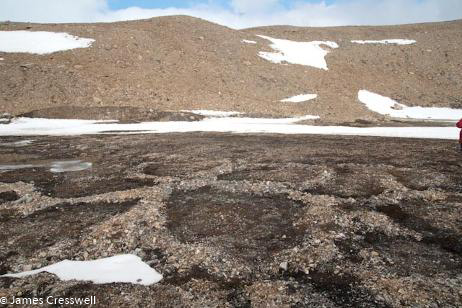 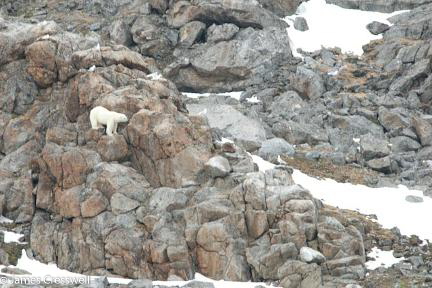 A polar bear hunting for birds eggs on Spitsbergen 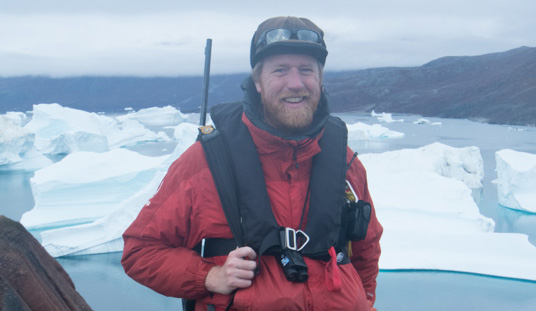 Contact us now to find out more about this voyage. James will be happy to answer any questions you might have as he has guided on this voyage a number of times.

PLEASE NOTE: All itineraries are for guidance only. Programs may vary depending on local ice and weather conditions and in order to take advantage of opportunities to see wildlife. The on-board expedition leader determines the final itinerary. Itineraries may mention places that require permission to land, which must be granted by the relevant national authorities. Such permission is not granted prior to the publishing of these itineraries. Flexibility is paramount for expedition cruises. Average cruising speed of m/v Hondius is 10,5 knots.

Day 2: Cruising Krossfjorden
Heading north along the west coast, you arrive by morning in Krossfjorden. Here you might board the Zodiacs for a cruise near the towering blue-white face of the Fourteenth of July Glacier. On the green slopes near the glacier, colorful flowers bloom while flocks of kittiwakes and Brünnich’s guillemots nest on the cliffs. You have a good chance of spotting an Arctic fox scouting for fallen chicks or a bearded seal paddling through the fjord. In the afternoon you sail to Ny Ålesund, the northernmost settlement on Earth. Once a mining village served by the world’s most northerly railway – you can still see its tracks – Ny Ålesund is now a research center. Close to the community is a breeding ground for barnacle geese, pink-footed geese, and Arctic terns. And if you’re interested in the history of Arctic exploration, visit the anchoring mast used by polar explorers Amundsen, Ellsworth, and Nobile in their airship, Norge (1926).

Day 3: Route to Raudfjorden
In the morning you land at Ytre Norsköya and walk to the top of the island, where 17th-century whalers had an observation post to spot bowhead whales surrounded by puffins. Alternately (on our HDS04 voyage), you may land on Indre Norsköya at Sabine’s Observatory, where Edward Sabine (1823) studied the curvature of the Earth. Sailing to Raudfjorden on the north coast of Spitsbergen, you take in an expansive fjord spilling with glaciers – and maybe even visited by ringed and bearded seals. The cliffs and shoreline of this fjord also support thriving seabird colonies, rich vegetation, and the possibility of polar bears.

Day 4: The massive Monaco Glacier
Depending on the weather, you could sail into Liefdefjorden and cruise within sight of the 5-kilometer-long (3.1 miles) face of the Monaco Glacier. The waters in front of this glacier are a favorite feeding spot for thousands of kittiwakes, and the base of the ice is a popular polar bear hunting ground. If ice conditions prevent sailing here early in the season, an alternate route along the west coast of Spitsbergen may be used.

Day 5: Into Sorgfjorden (Fjord of Sorrows)
Sailing into Sorgfjorden, you land about one km (.6 miles) southwest of Eolusneset, not far from a walruss haul-out area. At nearby Krosshaugen you can see the graves of 17th-century whalers, and this is also a good area to spot ptarmigans. Later in the day, you continue to the opposite side of the fjord to Crozierpynten. Here you can view the remains of the Swedish Arc of Meridian Expedition, 1899 – 1900 and walk some distance across Basissletten to Basisodden, a track scientists once used for long-distance measurements.

Day 6: Highlights of Hinlopen
Today you sail into Hinlopen Strait, home to bearded seals, ringed seals, and polar bears. At the entrance there is even the possibility to spot blue whales. After cruising among the ice floes of Lomfjordshalvøya in the Zodiacs, you can view the bird cliffs of Alkefjellet with their thousands of Brünnich’s guillemots. On the east side of Hinlopen Strait, you may even attempt a landing on Nordaustlandet. Here reindeer, pink-footed geese, and walruses are likely sights. You may take an alternate route if ice prevents entry into Hinlopen.

Day 7: Walrus haul-outs and historic remains
Pushing eastward along the north coast of Nordaustlandet, you will likely sail through Beverly Sundet, seeing tokens of historic expeditions along the shores of Chermsideöya. The northernmost point of your voyage may be on Phippsöya, featuring a walrus haul-out and ivory gull colony. An alternative (on our HDS04 trip) is Vesle Tavleöya, another site from the Arc-of-Meridian Expedition. At Rossöya we reach 80° 49’ north, less than 870 km (540 miles) from the geographic North Pole.

Day 8: Sailing the continental shelf
While retracing your route west, keep watch for polar bears and elusive Greenland (bowhead) whales. About 40 nautical miles west of Spitsbergen, you sail the edge of the continental shelf. Here fin whales forage during the summer in the upwelling zones (where cold, nutrient-rich water wells up from below the sea’s surface) that run along the Spitsbergen banks. At the mouth of Kongsfjorden, you have a good chance of seeing minke whales.

Day 9: Reindeer, foxes, and so many seabirds
Walruses sometimes haul out in Forlandsundet, your next stop. As an alternative, you might sail into St. Jonsfjorden or venture south to the mouth of Isfjorden, landing at Alkhornet. Seabirds nest on these renowned cliffs, while Arctic foxes search below for fallen eggs and chicks, and reindeer graze on the sparse vegetation. You arrive in Longyearbyen later at night.

Day 10: There and back again
Every adventure, no matter how grand, must eventually come to an end. You disembark in Longyearbyen with memories that will accompany you wherever your next adventure lies.

If you book this polar expedition cruise through us we will pay your Carbon Offset for you and will provide you a Certificate on completion of your expedition.

Included Workshops for the Summer SOLSTICE & Arc of Meridian Voyages

The speaker Dr.-Ing. Lothar Kurtze is Fellow of the Royal Astronomical Society, London. He is a volunteer project coordinator of the Faulkes Telescope Projects in Germany and Austria and is committed to astronomical education. In Weinheim (Baden-Württemberg) he runs a small private observatory and in his free time he is sometimes a guest lecturer for astronomy on expedition ships in the Arctic and Antarctic. His main job is mechanical engineering in Salzburg.

Workshop 2: Photography
We offer a free photo workshop for beginners and advanced photographers under the supervision of a photo expert on board. Everybody is welcome to participate, no previous experience required. The workshop group (up to 20 participants per guide during landings, minimum of 20 for the activity while on board) will be accompanied by the photo expert during activity on shore.

Participants with a special interest in photography must bring their personal photo equipment. During cruise days, everybody will be able to listen to photo lectures and workshops in order to learn more about objects, exposures, and photo composition. The workshop does not intend to instruct passengers on how to use specific camera models, but is meant to give insight into better photo results by respecting the basic rules of photography. Photo workshop participants can also take part in other activities on board.

Included Workshop for the  Arc of Meridian Voyage

Arc of Meridian:
The Earth is flattened towards the Poles. In the 19th century astronomers were aware of it and they began to organise expeditions into the Arctic in order to measure this flattening from the northernmost lands. We will pay attention to some of their measure points in Northeast Spitsbergen on day 3 and day 7 as mentioned in the above itinerary.

Edward Sabine had an observatory in 1823 on Indre Norskøya at Sabinehaugen. He used a Pendulum to measure gravity, and suggested measurements of meridians (lines of longitude through the poles) in Spitsbergen. Eventually, at the end of the 19th century, the Swedish–Russian Arc of Meridian Expeditions were carried out. Their measurements required a chain of triangulation points. The chain reached from Crozierpynten and Vesle Tavleøya in the north to Keilhaufjellet in the south. The measurements defined the increasing flattening of the Earth toward the Poles. Most cairns along the chain can still be seen today.