Around Spitsbergen with Kvitøya

Departures marked with a * are Basecamp cruises. These have a number of optional additional activities including snow shoeing, kayaking and diving, please contact for full details

This cruise around Spitsbergen gives you a great chance to see whales, foxes, reindeer, seals, and polar bears. The expedition will make a landing on the island of Kvitøya, a site of historical significance, and home of a large walrus population. 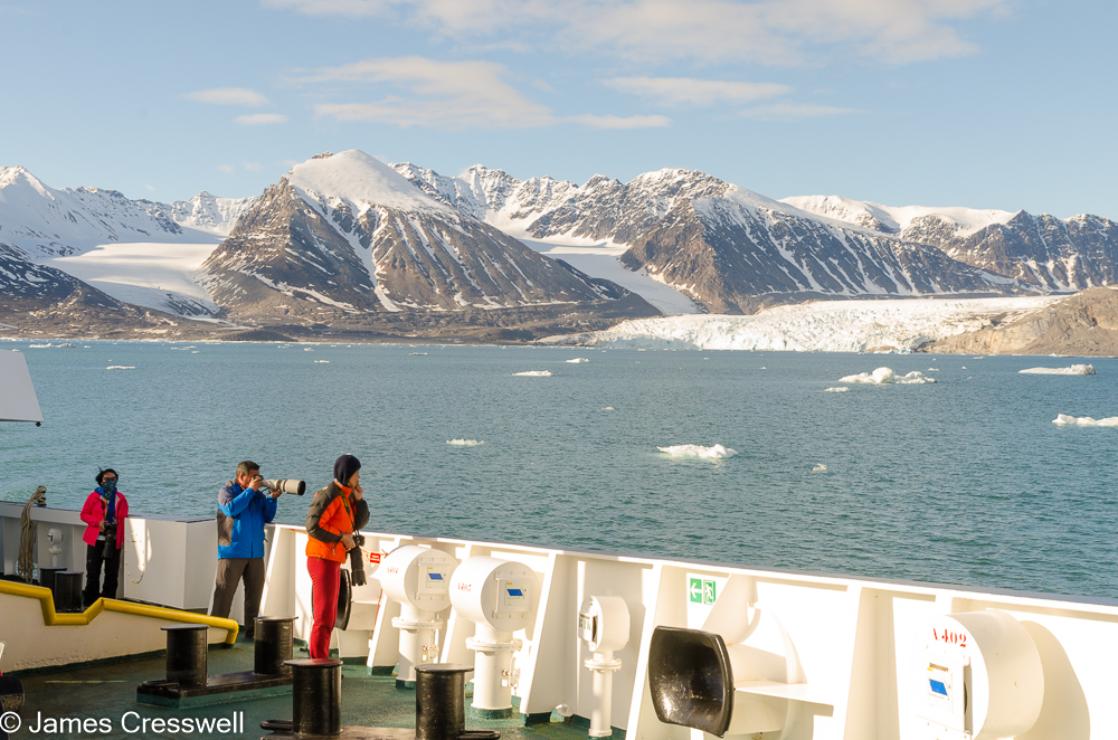 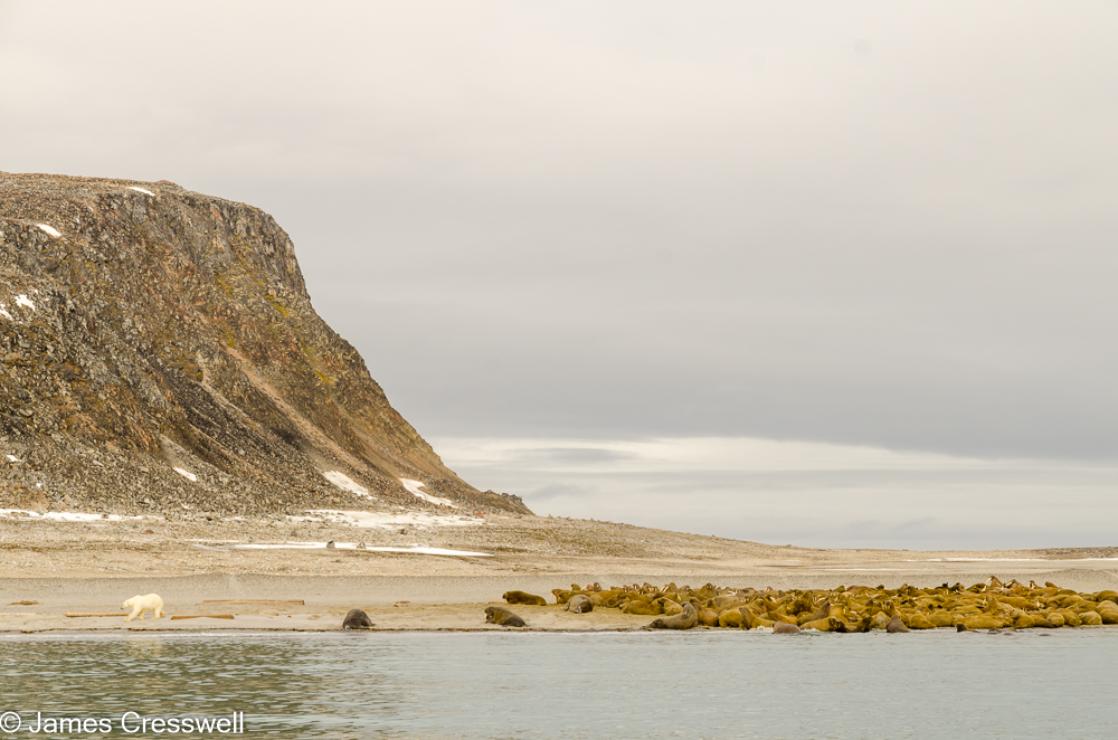 A polar bear and walrus haul out on Phippøya, Sjuøyane (Seven Islands) 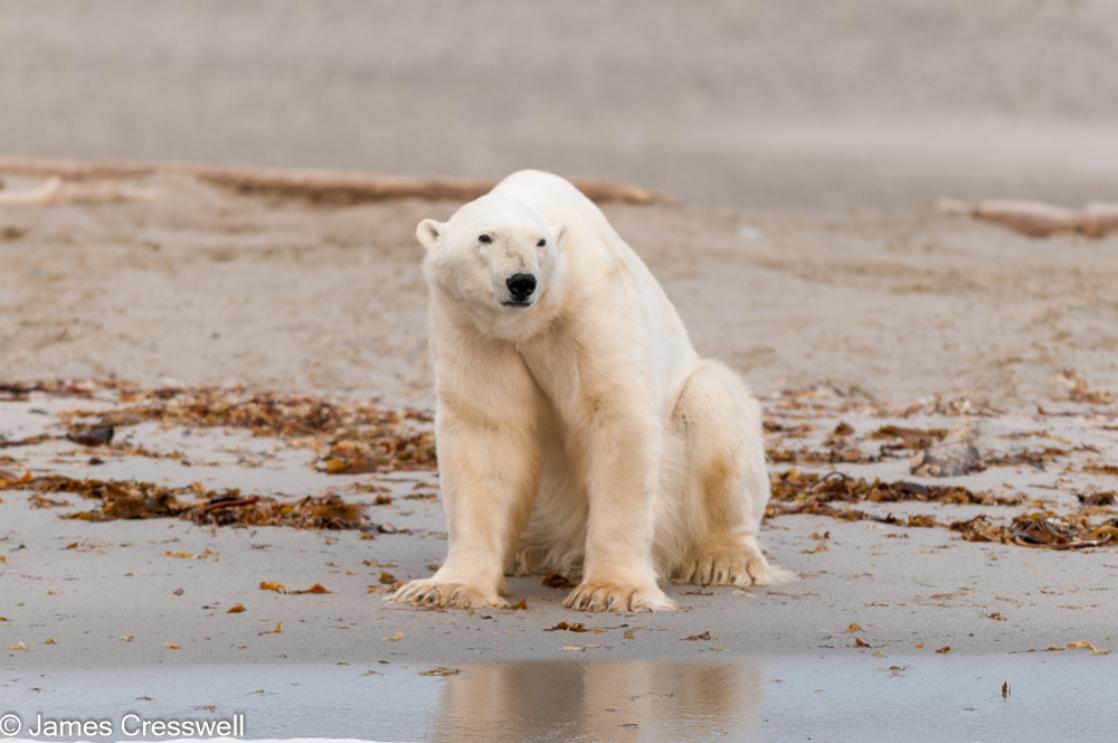 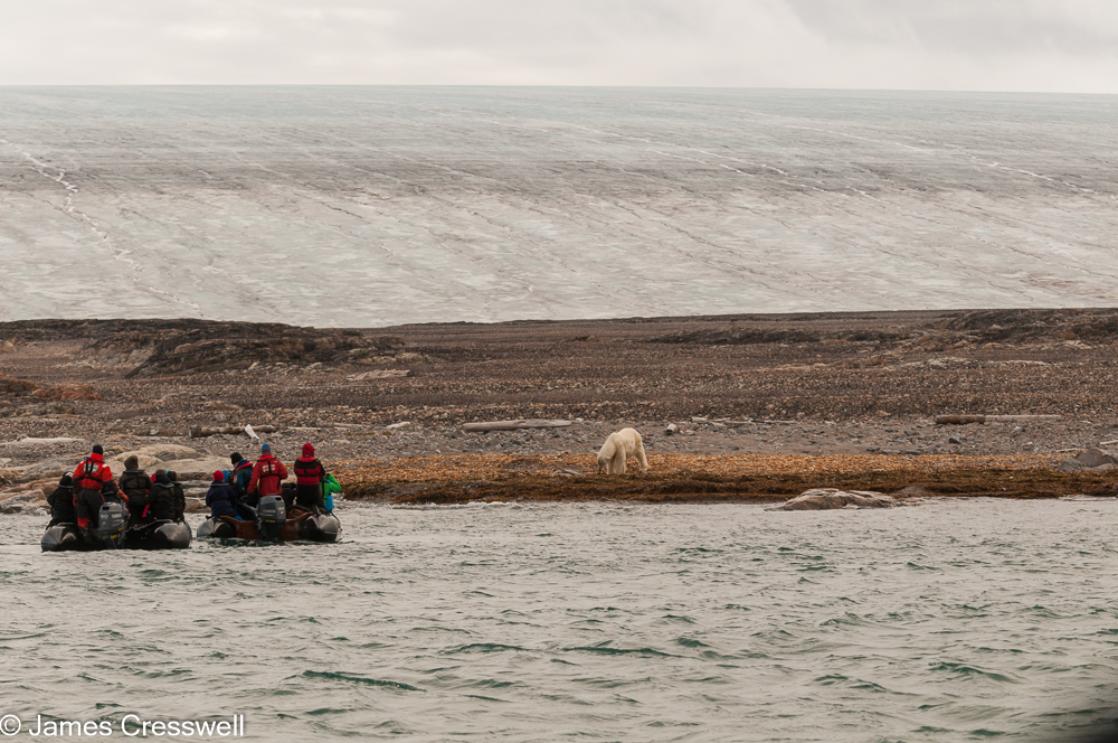 A polar bear being viewed by zodiacs on Kvitøya 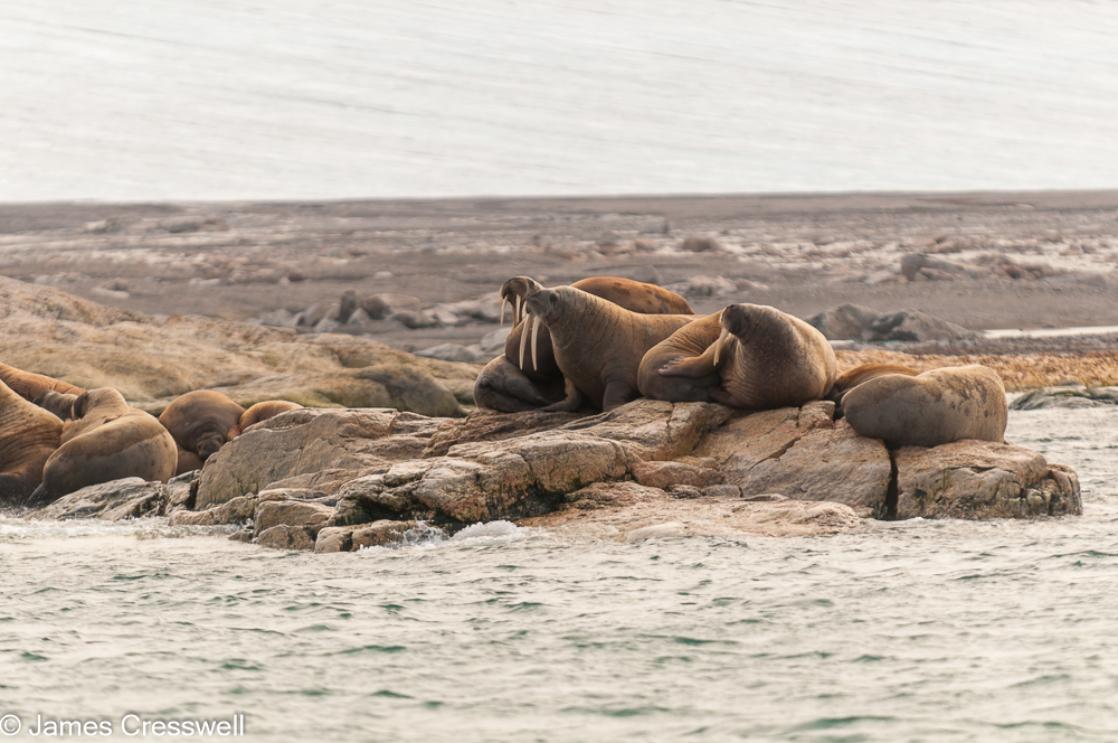 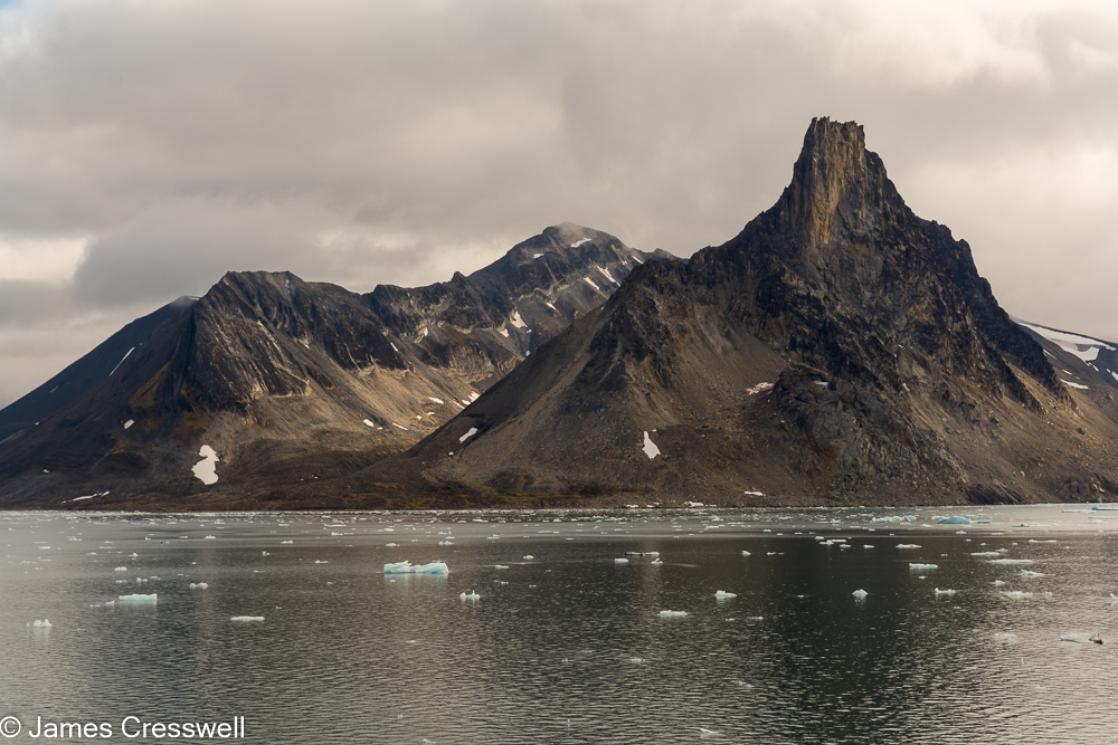 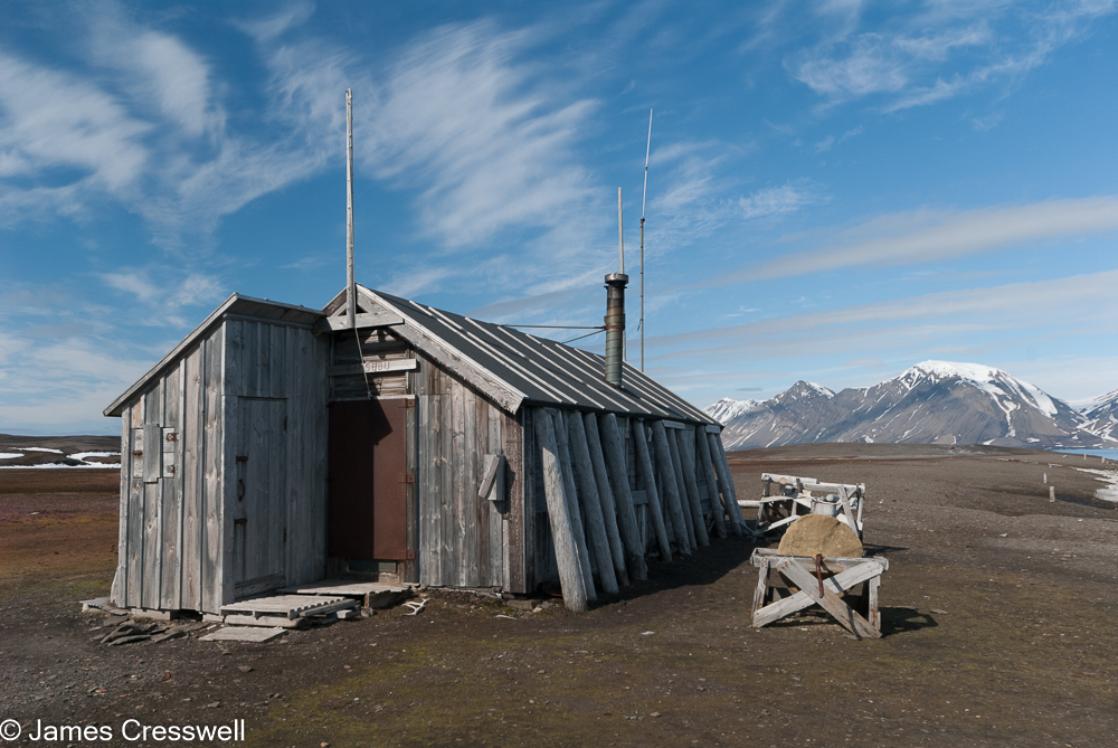 A hut at Ahlstrandhalvøya, Bellsund 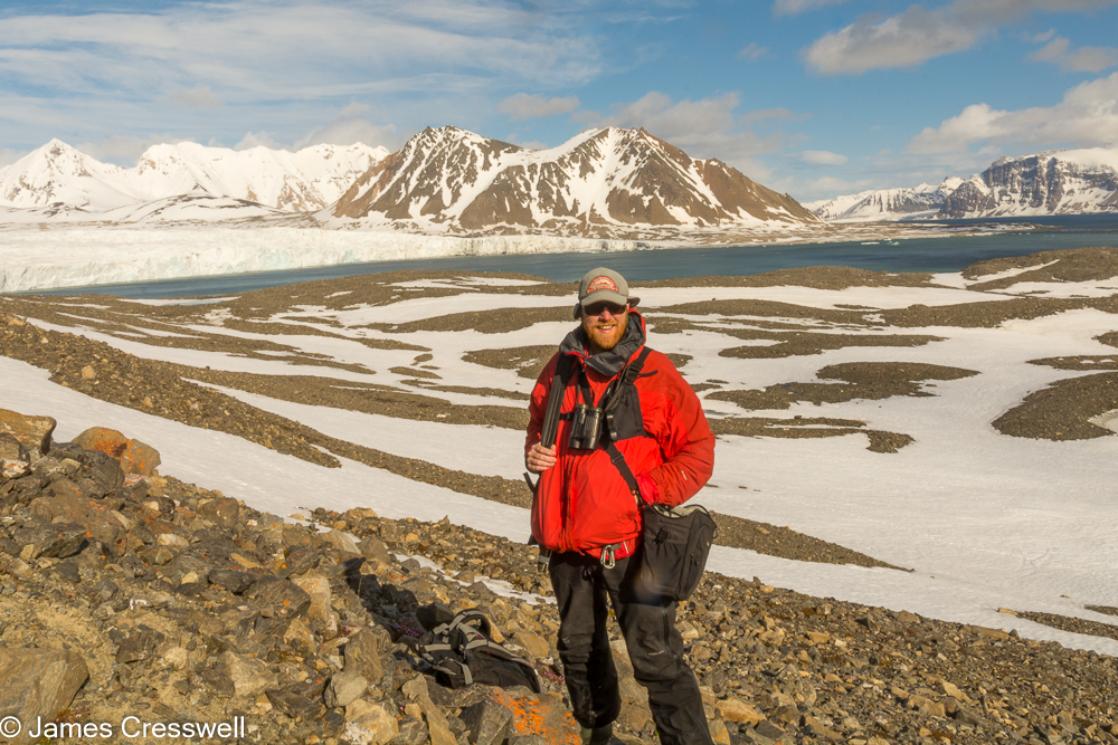 PLEASE NOTE: N.B. The chances that we can reach Kvitøya and complete a full Svalbard circumnavigation (based on our experiences from 2013—2019) are about 70%. In case we cannot complete a full circumnavigation, we may make a circumnavigation of Spitsbergen through Hinlopen Strait. All itineraries are for guidance only. Programs may vary depending on local ice and weather conditions and in order to take advantage of opportunities to see wildlife. The on-board expedition leader determines the final itinerary. Itineraries may mention places that require permission to land, which must be granted by the relevant national authorities. Such permission is not granted prior to the publishing of these itineraries. Flexibility is paramount for expedition cruises.

Day 2: Cruising Krossfjorden
Heading north along the west coast, you arrive by morning in Krossfjorden. Here you might board the Zodiacs for a cruise near the towering blue-white face of the Fourteenth of July Glacier. On the green slopes near the glacier, colorful flowers bloom while flocks of kittiwakes and Brünnich’s guillemots nest on the cliffs. You have a good chance of spotting an Arctic fox scouting for fallen chicks, or a bearded seal paddling through the fjord.

In the afternoon you sail to Ny Ålesund, the northernmost settlement on Earth. Once a mining village served by the world’s most northerly railway – you can still see its tracks – Ny Ålesund is now a research center. Close to the community is a breeding ground for barnacle geese, pink-footed geese, and Arctic terns. And if you’re interested in the history of Arctic exploration, visit the anchoring mast used by polar explorers Amundsen and Nobile in their airships, Norge (1926) and Italia (1928).

Day 3: Stop at the Seven Islands
The northernmost point of your voyage may be north of Nordaustlandet, in the Seven Islands. Here you reach 80° north, just 870 km (540 miles) from the geographic North Pole. Polar bears and walrus inhabit this stark desolate landscape. Later in the day the ship may roam for several hours among the pack ice in search of wildlife.

Day 4: The great glacier front of Schweigaardbreen
Pushing east to Nordaustlandet, you reach the area where the Italian captain Sora tried to rescue the Nobile Expedition in 1928. The focus here is the great glacier front of Schweigaardbreen, though you may also land at Firkantbukta, getting the chance to gain some altitude and take a few higher-elevation photos. Alternately, you could make a Zodiac cruise near Storøya, where you might encounter walruses.

Day 5: Ice cap at Kvitøya
Today you try to reach the rarely visited, far to the east and close to Russian territory. The enormous ice cap covering this island leaves only a small area bare. You land at the western tip of Andréeneset, where the Swedish explorer S. A. Andrée and his companions perished in 1897. Another objective for the day is Kræmerpynten, where a sizable group of walruses reside.

Day 6: The longest glacier in Spitsbergen
South of Nordaustlandet you may land on Isisøya, formerly a Nunatak area surrounded by glaciers but now an island surrounded by the sea. You then may pass by Bråswellbreen, part of the largest ice cap in Europe and famed for its meltwater waterfalls.

Day 7: Barentsøya’s many bounties
The plan is to make landings in Freemansundet, though polar bears sometimes make this impossible. Potential stops on Barentsøya include Sundneset (for an old trapper’s hut), Kapp Waldburg (for its kittiwake colony), and Rindedalen (for a walk across the tundra). You might also cruise south to Diskobukta, though Kapp Lee is more likely your destination. On Kapp Lee is a walrus haul-out, Pomor ruins, and the chance for hikes along Edgeøya.

Day 8: Land of the pointed mountains
You start the day by cruising the side fjords of the Hornsund area of southern Spitsbergen, taking in the spire-like peaks: Hornsundtind rises 1,431 meters (4,695 feet), and Bautaen is a perfect illustration of why early Dutch explorers named this island Spitsbergen, meaning “pointed mountains.” There are 14 sizable glaciers in this area as well as opportunities for spotting seals, beluga whales, and polar bears.

Day 9: Bell Sund’s flora, fauna, and haunting history
Today you find yourself in Bell Sund, one of the largest fjord systems in Svalbard. The ocean currents make this area slightly warmer than other areas in the archipelago, which shows in the relatively lush vegetation. Here there are excellent opportunities to enjoy both history and wildlife. A possibility is Ahlstrandhalvøya, at the mouth of Van Keulenfjorden, where piles of beluga skeletons can be found. These remains of 19th-century whale slaughter are a haunting reminder of the consequences of rampant exploitation. Fortunately, belugas were not hunted into extinction, and you have a good chance of coming across a pod. Alternately, while cruising the side fjords of Bellsund, you can explore tundra where reindeer like to feed as well as rock slopes where little auks are breeding.

Day 10: There and back again
Every adventure, no matter how grand, must eventually come to an end. You disembark in Longyearbyen, taking home memories that will accompany you wherever your next adventure lies.

If you book this Expedition Cruise through us we will pay your Carbon Offset for you and will provide you a Certificate on completion of your expedition.