This ambitious expedition into the 192-island archipelago of Franz Josef Land gives you the opportunity to spot such exotic Arctic wildlife as polar bears, Greenland whales, and an assortment of seal and seabird species, while also visiting the remains of historic 19th-century expeditions. 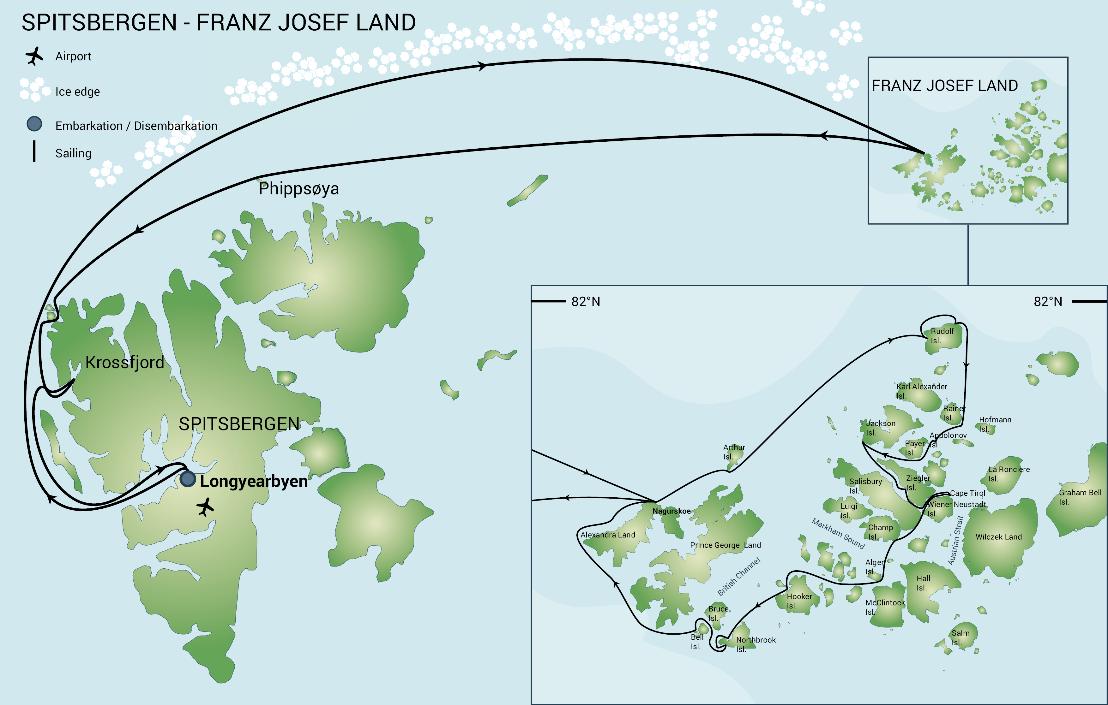 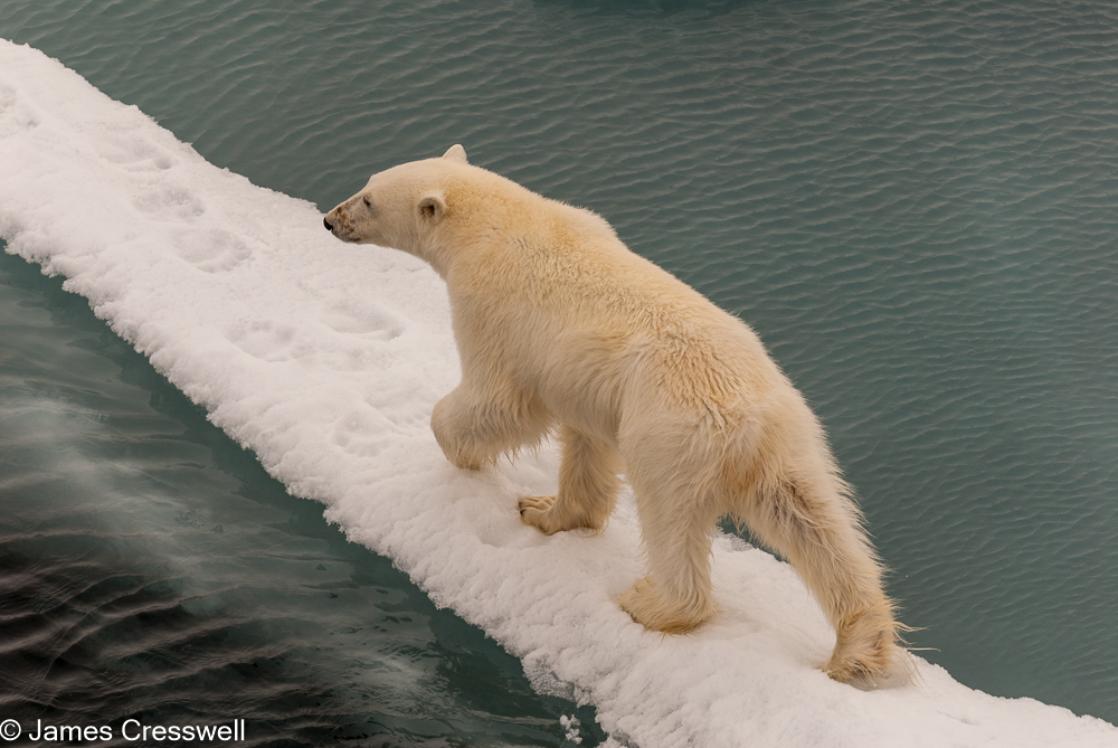 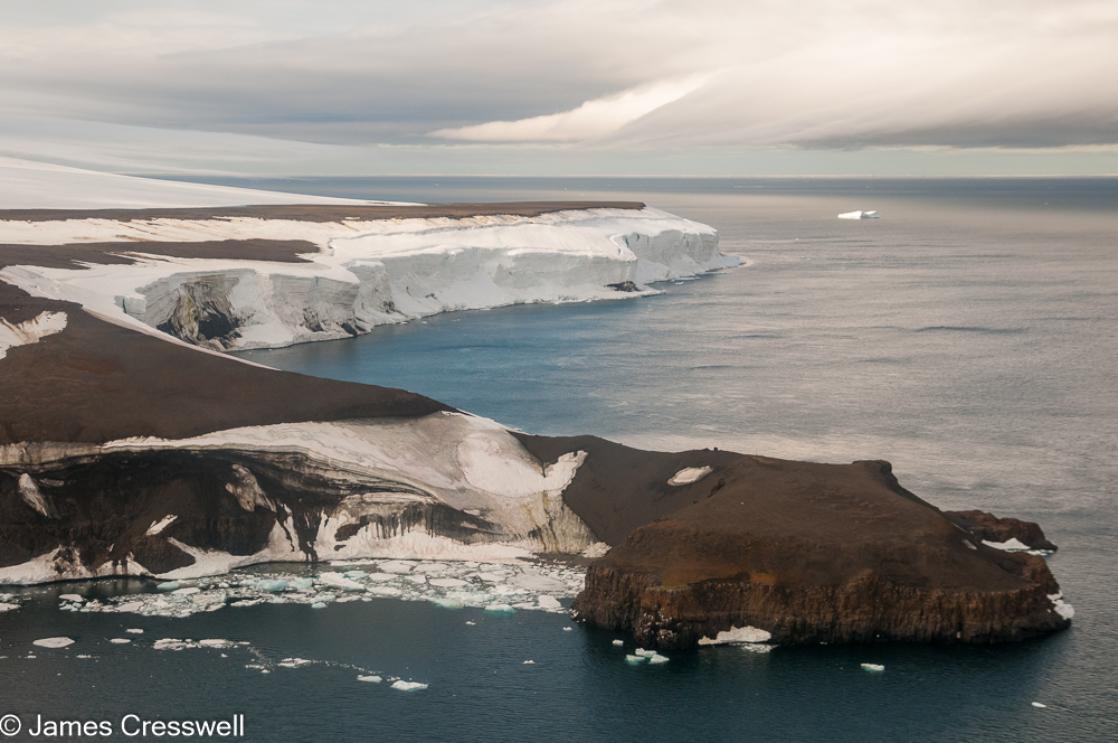 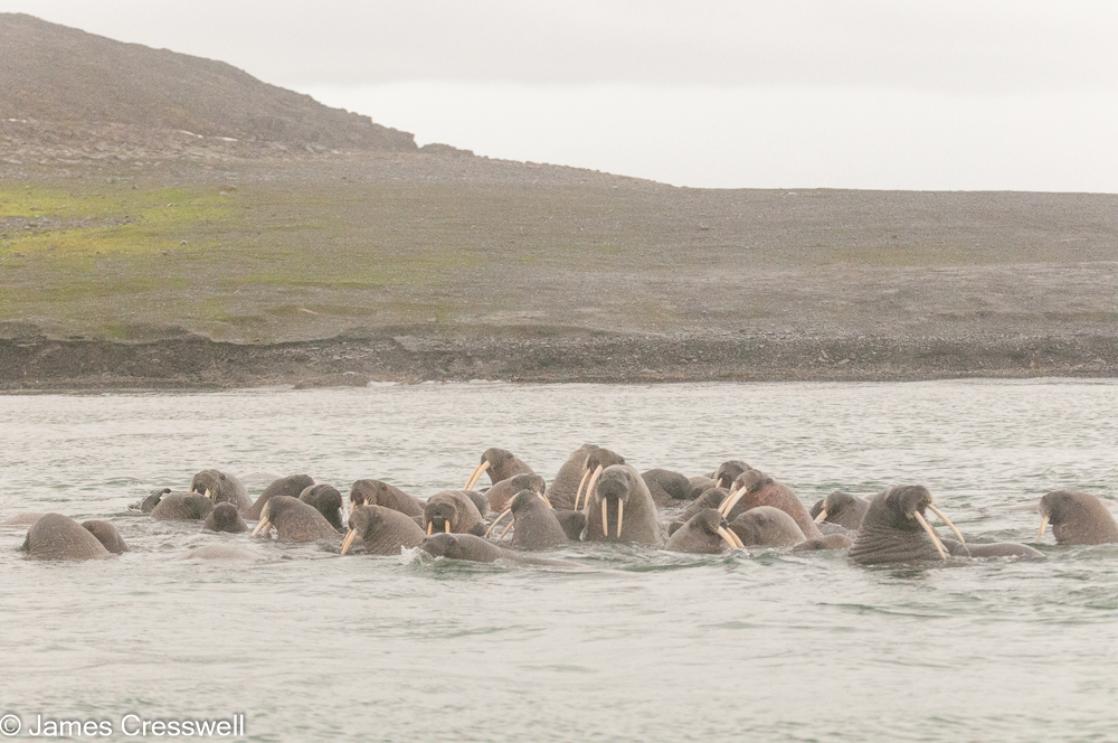 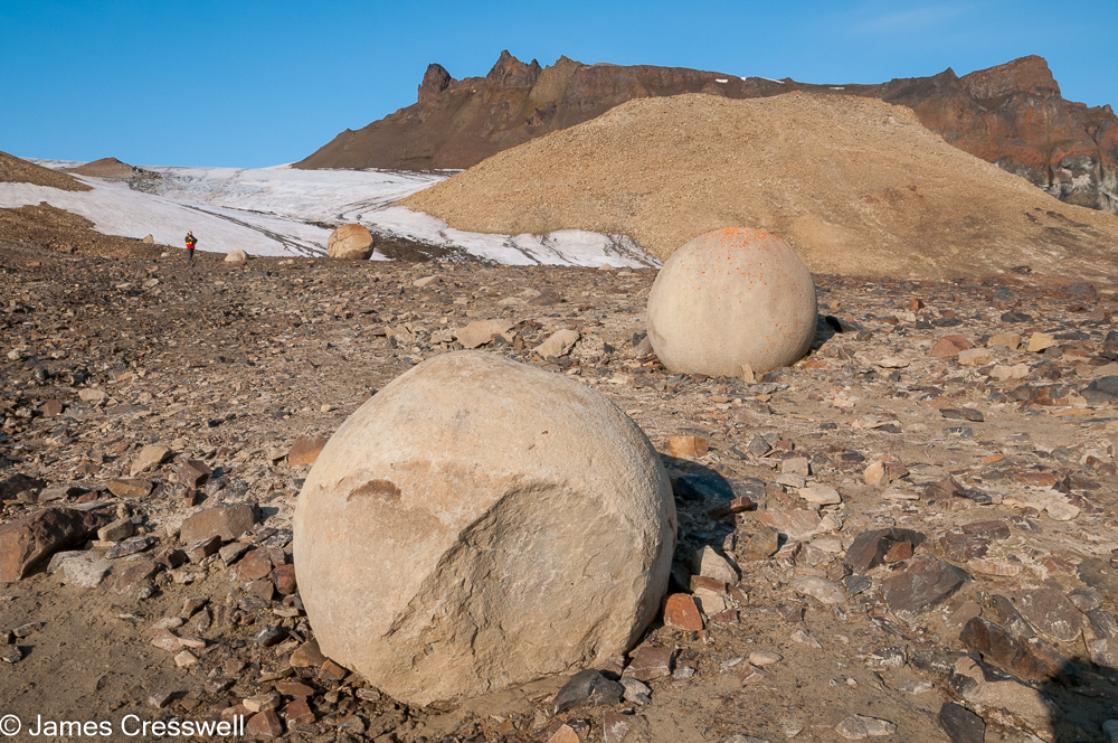 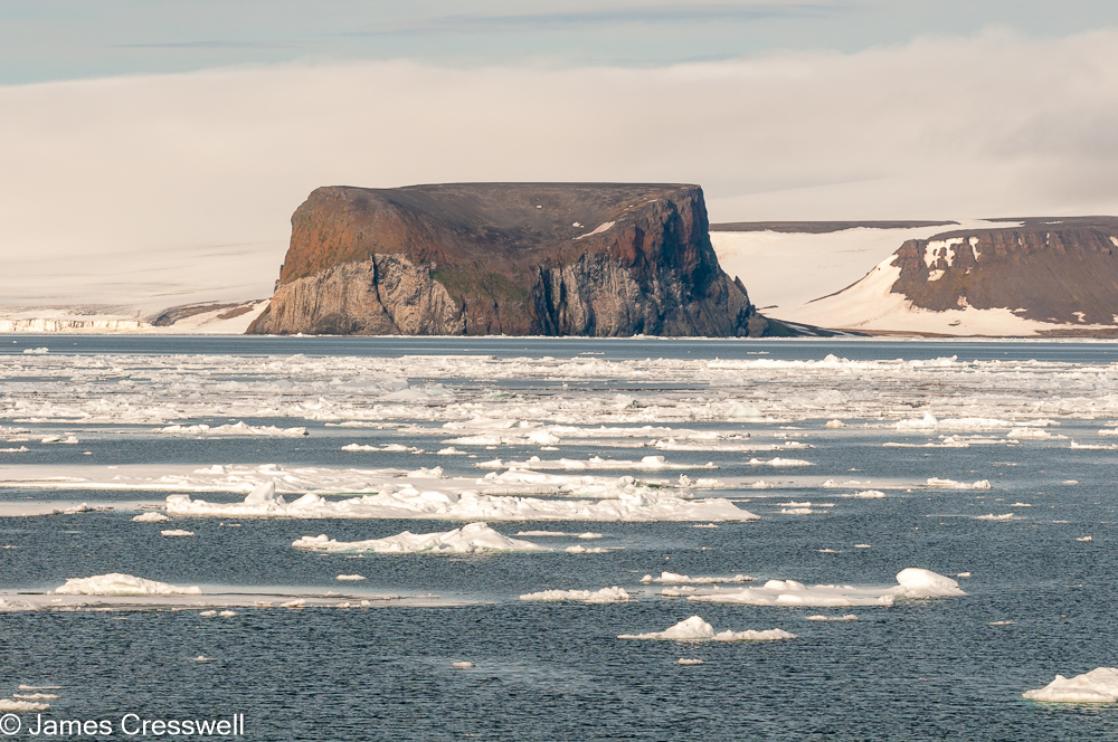 Rubini Rock, Hooker Island is the eroded neck of a former volcano and now forms an impressive bird cliff 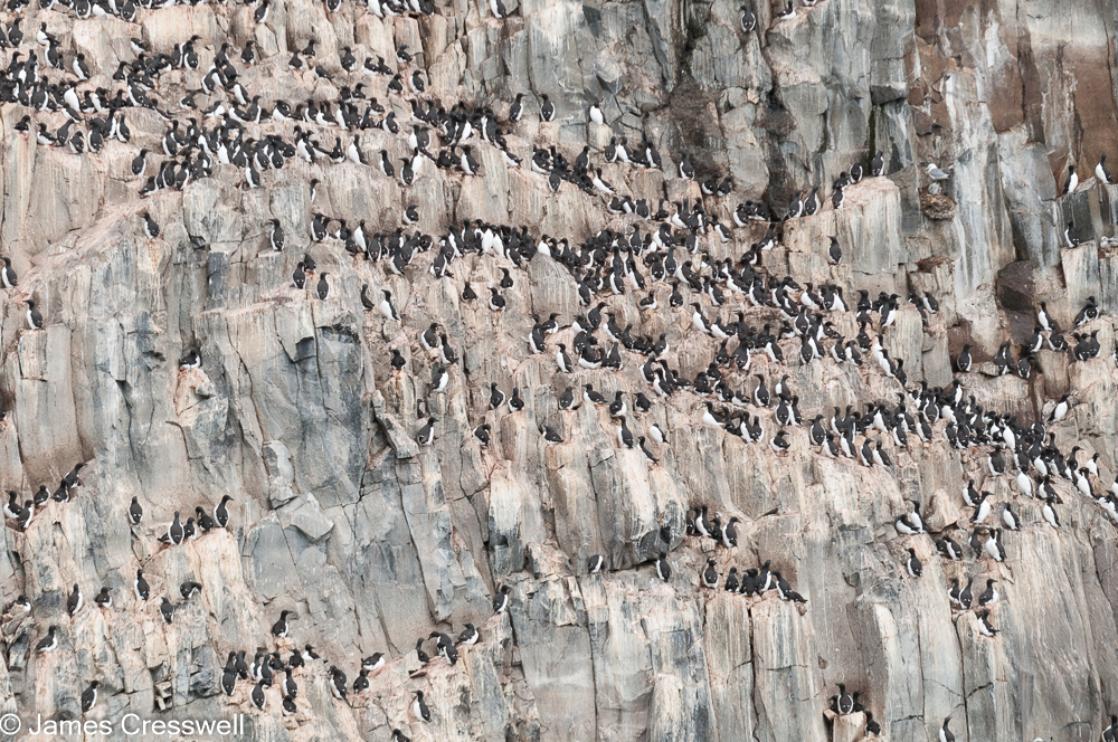 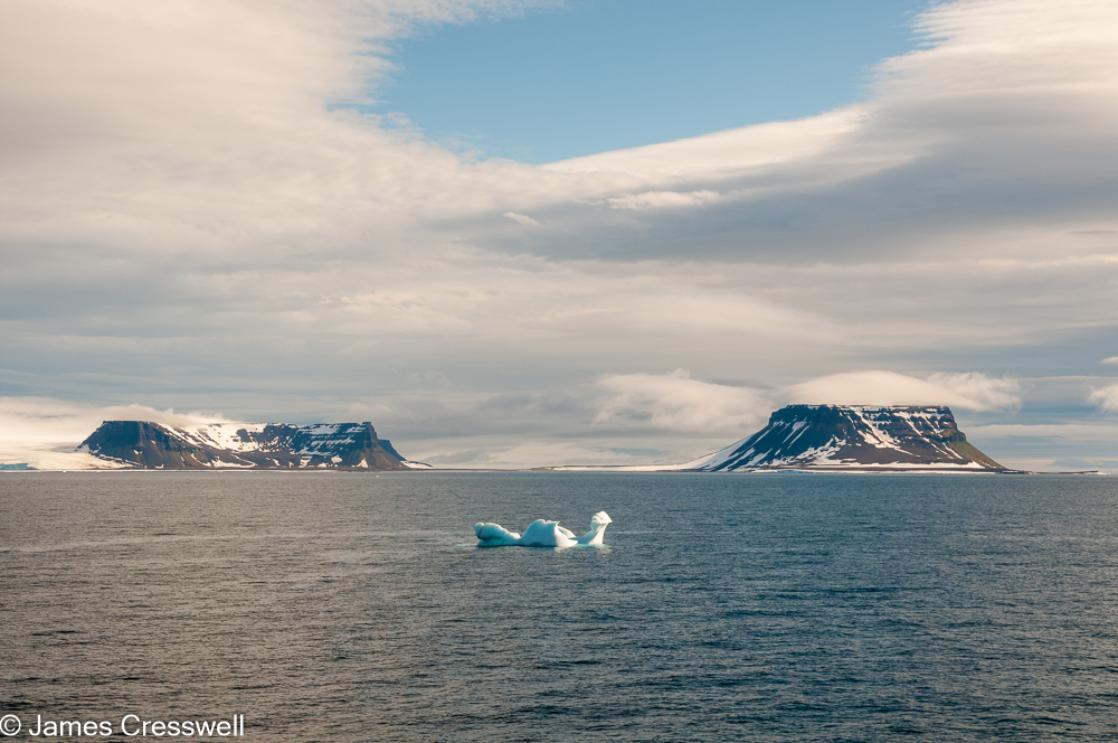 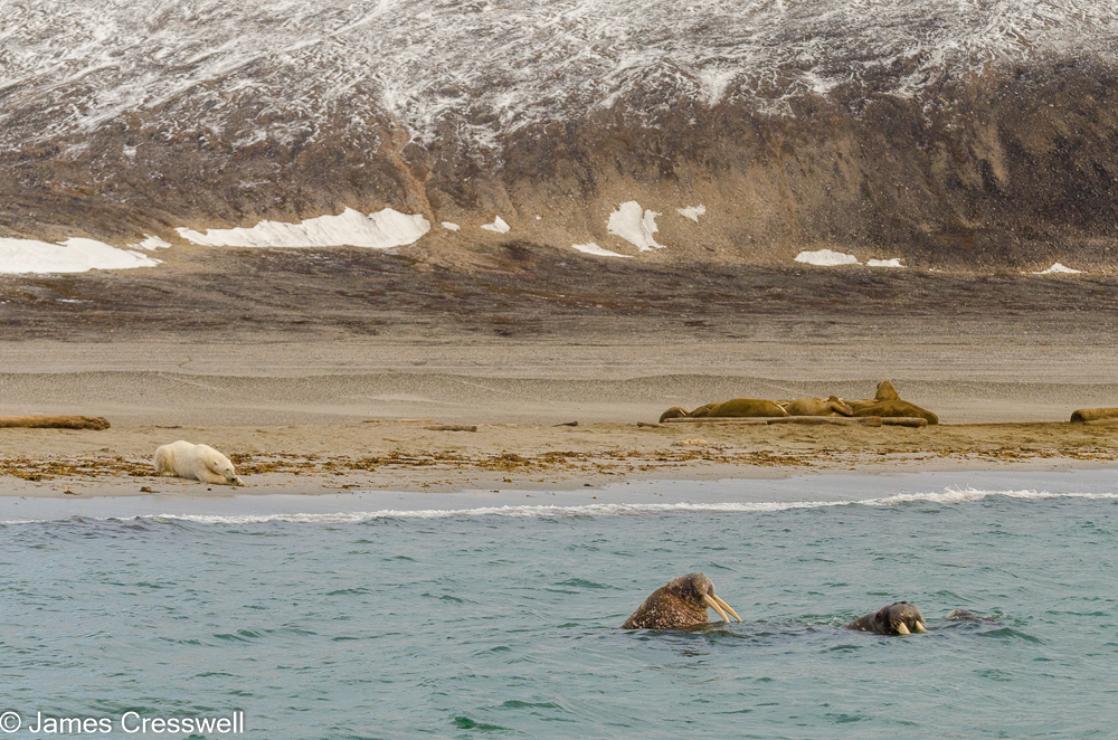 A polar bear watches walrus on Svalbard's the rugged island of Phippsøya, in the Seven Islands (Sjuøyane) 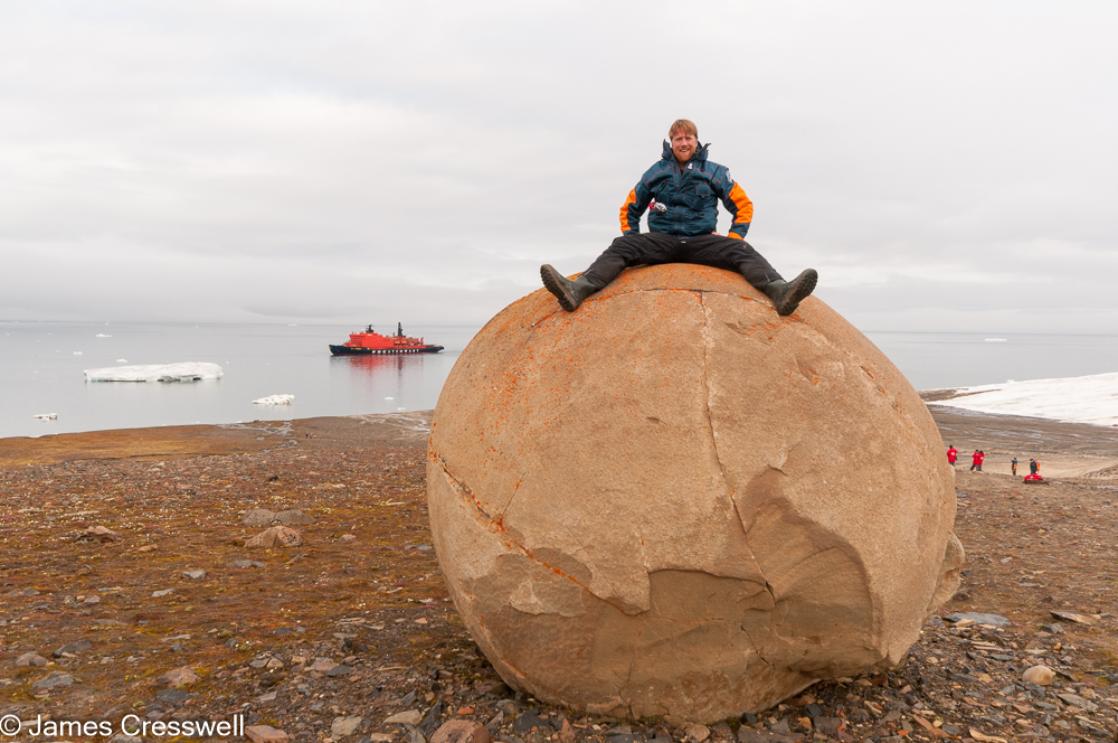 PLEASE NOTE: All itineraries are for guidance only. Programs may vary depending on ice, weather, and wildlife conditions. Landings are subject to site availabilities, permissions, and environmental concerns per IAATO regulations. Official sailing plans and landing slots are scheduled with IAATO prior to the start of the season, but the expedition leader determines the final plan. Flexibility is paramount for expedition cruises. The average cruising speed of our vessel is 10.5 knots.

Day 1: The start of your Arctic adventure
We set out from Longyearbyen at 16.00 hours, hoping to get some initial sightings of local seabirds and marine life along the way.

Days 2 & 3: Sailing the Spitsbergen ice edge
The next two days we spend sailing eastward, exploring the ice edge north of Spitsbergen. Here we might see seals, whales, seabirds, and even polar bears.

Day 5: Historic expeditions on Rudolf Island
The goal is to sail to Rudolf Island, the northernmost island of the Franz Josef Land archipelago. Here we hope to land near an abandoned Russian station in Teplitz Bay, seeing some reminders of the Italian and American expeditions here around the turn of the 19th century. We will try to land at Cape Fligely, the northernmost landmass in Eurasia, but may also change the order of these visits.

Day 6: Walrus haul-outs and Cape Norvegia
After sailing south, we will reach Apollonov Island, a large haul-out site for walruses, which you might be able to see from our Zodiacs. At Cape Norvegia on Jackson Island, our aim is to visit the site where Nansen and Johansen spent the winter after leaving the m/v Fram in 1895. Later we will sail southeast by Ziegler Island, then continue south through narrow but spectacular straits.

Day 7: Geological wonders and historic expeditions
Today we land at Cape Tirol, located on the northeast coast of Wiener Neustadt Island in the Austrian Straight. This cape was named by the Austro-Hungarian Tegthoff Expedition and was climbed by its leader, Julius von Payer, in spring of 1874. On Champ Island at Cape Trieste, we plan to make excursions among enormous spherical stone formations, after which we aim to sail by the coast of Alger Island, where the American Baldwin-Ziegler Expedition had its main camp in 1901-02. This beautiful area is surrounded by mountainous islands boasting impressive glacier fronts.

Day 8: Cliffside seabirds and Arctic marine life
Early in the morning, we arrive at Rubini Rock on Hooker Island’s Tikhaya Bay. Along this impressive cliff face, you can see colonies of seabirds, such as Brünnich’s guillemots, black guillemots, little auks, fulmars, and kittiwakes. You might also see bearded seals, harp seals, or Greenland whales in this area. Next we sail to Cape Flora on Northbrook Island, an important site in the history of polar exploration. More than a century ago, several expeditions had their bases here, and on the cliffs behind Cape Flora are large colonies of Brünnich’s guillemots. It is exciting to witness the younger birds trying to glide from the ledges to the sea. At Günther Bay, we may take a Zodiac cruise near an important haul-out site for walruses. If landing at Cape Flora is difficult due to sea swell and permission, we will try to land at Bell Island, near Eira Lodge, the station of 19th-century British explorer Benjamin Leigh Smith.

Day 9: Back to Nagurskoye and Spitsbergen
In the morning, we will return to Nagurskoye. Here our four inspectors from Franz Josef Land National Park will leave the ship, after which we’ll sail west to Spitsbergen.

Day 10: The seven islands of northern Svalbard
In the northernmost area of the Svalbard archipelago lies an island group known as Sjuøyane, which translates to “seven islands.” Here we plan to land at the rugged island of Phippsøya, where you may be able to see more walruses.

Day 12: Journey’s end in Longyearbyen
We finally return to Svalbard’s principal town, where you will disembark the vessel, taking home priceless memories of friends made, wildlife encountered, and a once-in-a-lifetime Arctic adventure.

Wildlife you may see on this Voyage