This Falkland Islands, South Georgia, and Antarctic Peninsula cruise is an animal-lover’s dream come true. The expedition explores one of the last untamed areas on earth – a land of ruggedly beautiful landscapes and amazingly varied wildlife. 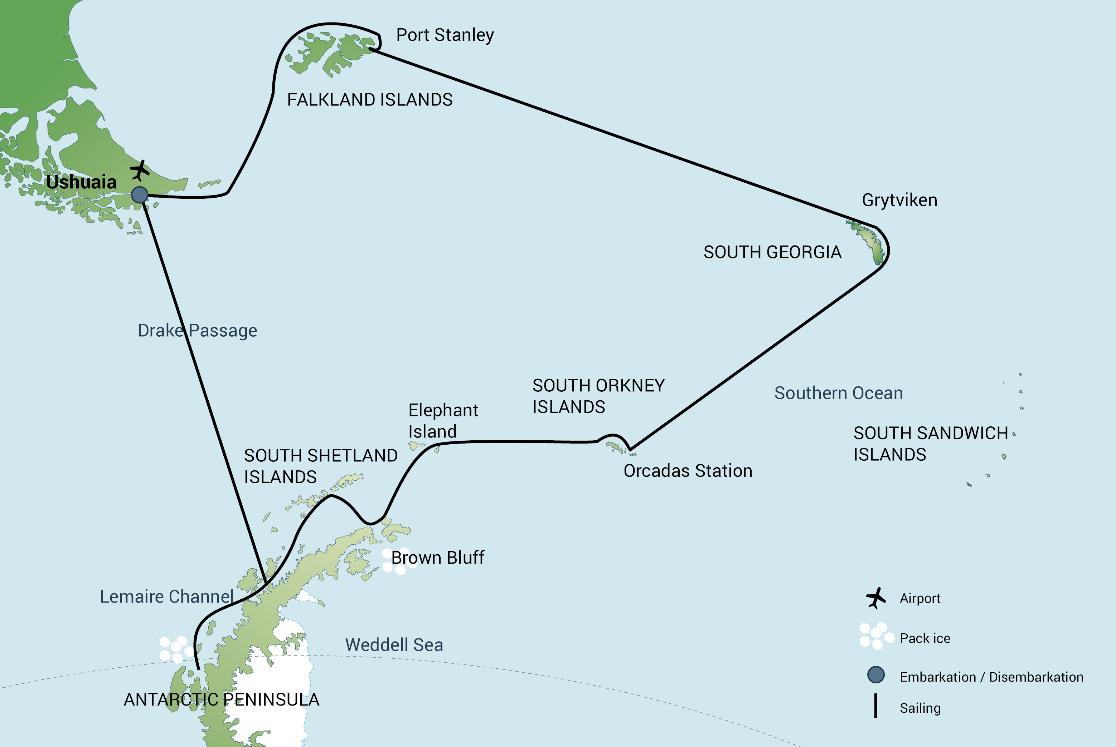 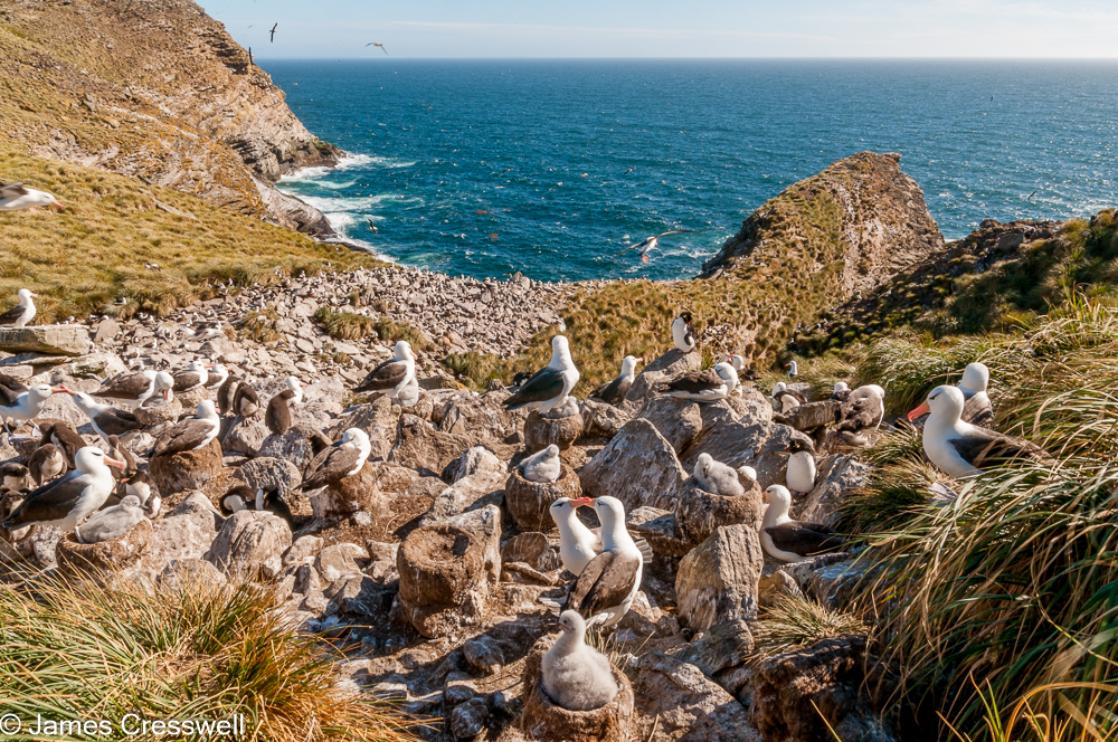 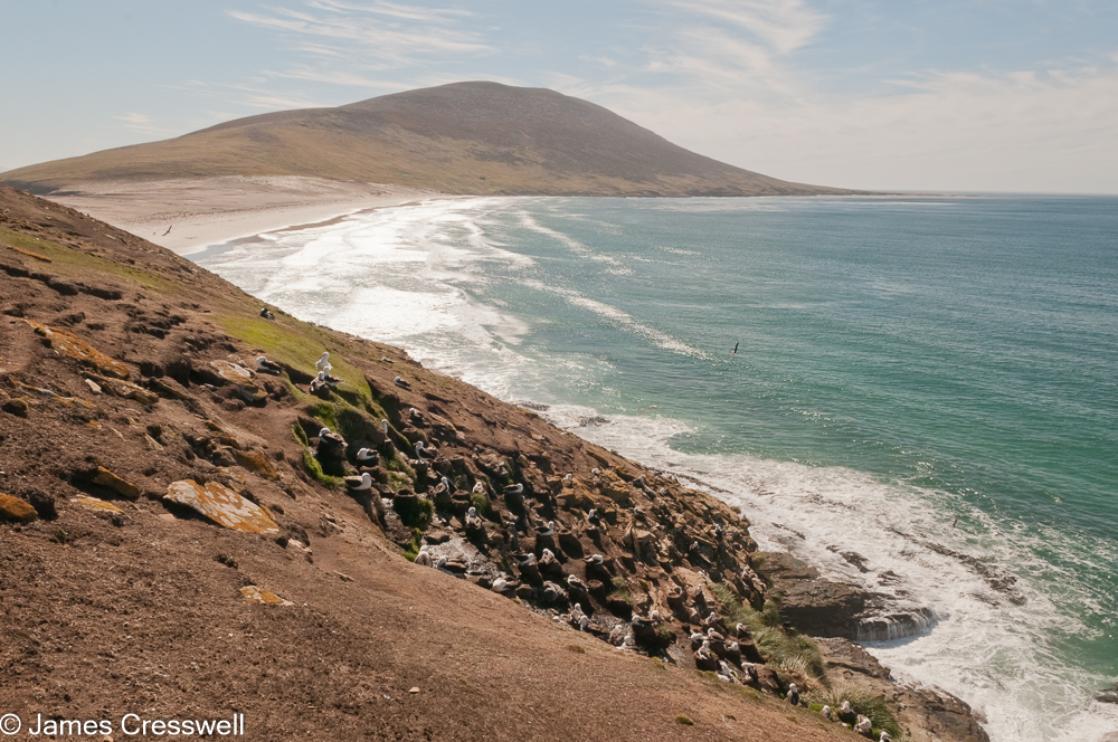 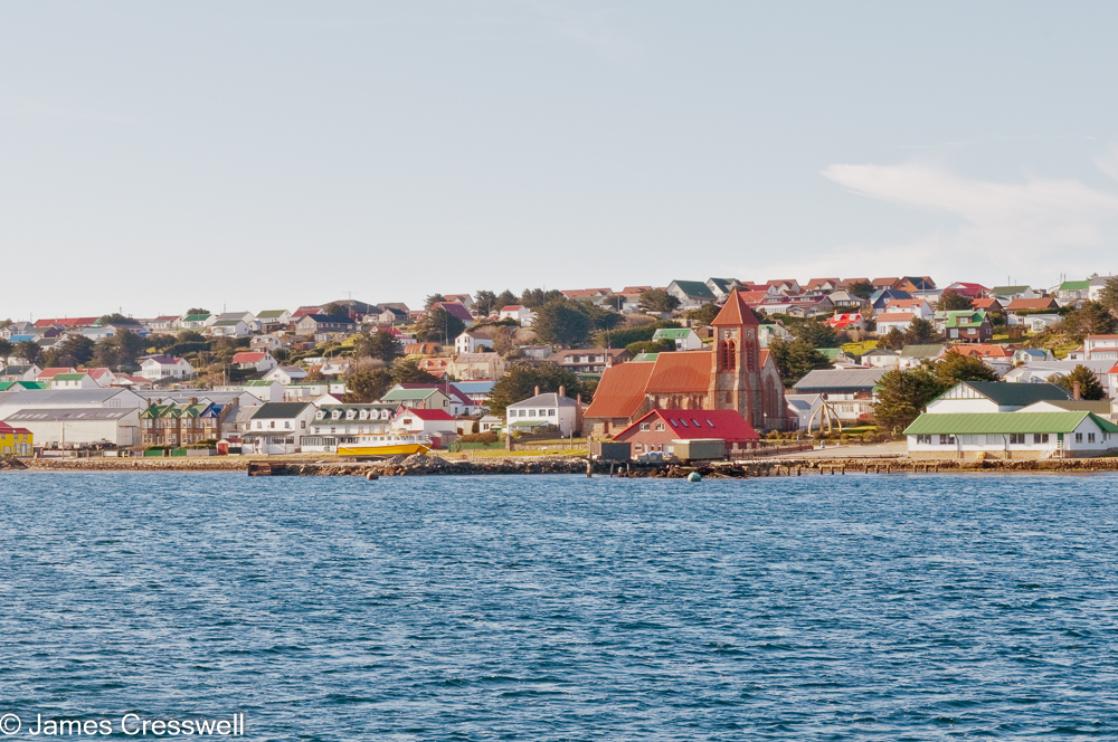 A wandering albatross chick on a nest at Prion Island, South Georgia 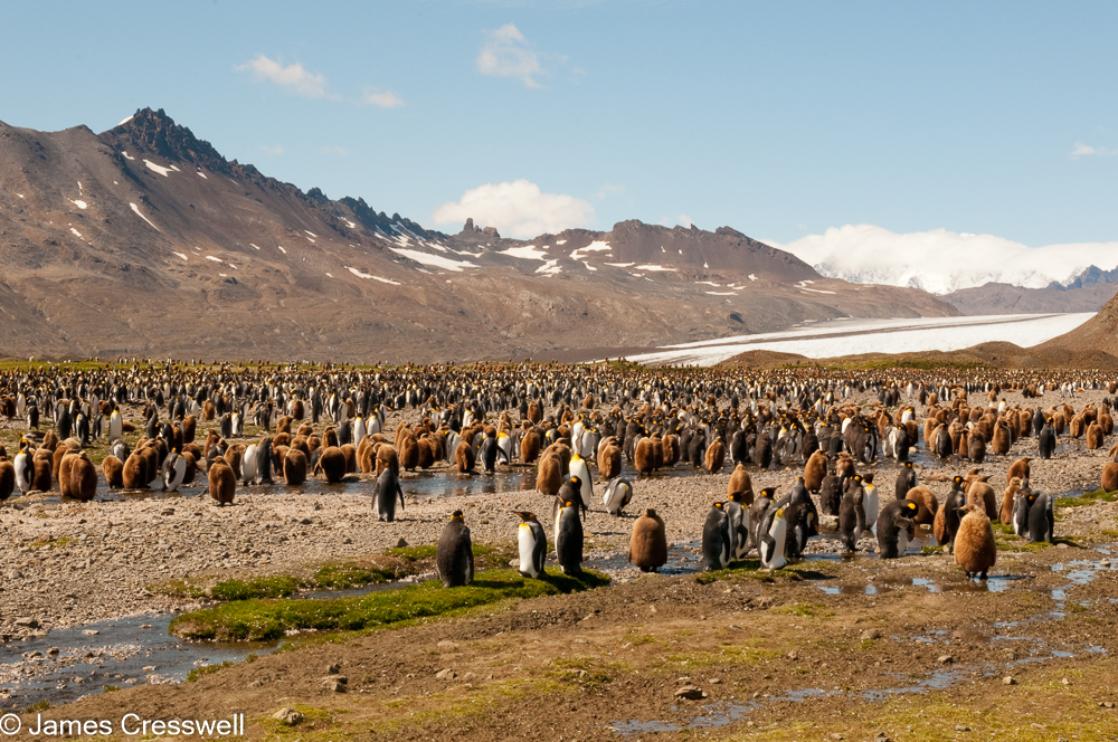 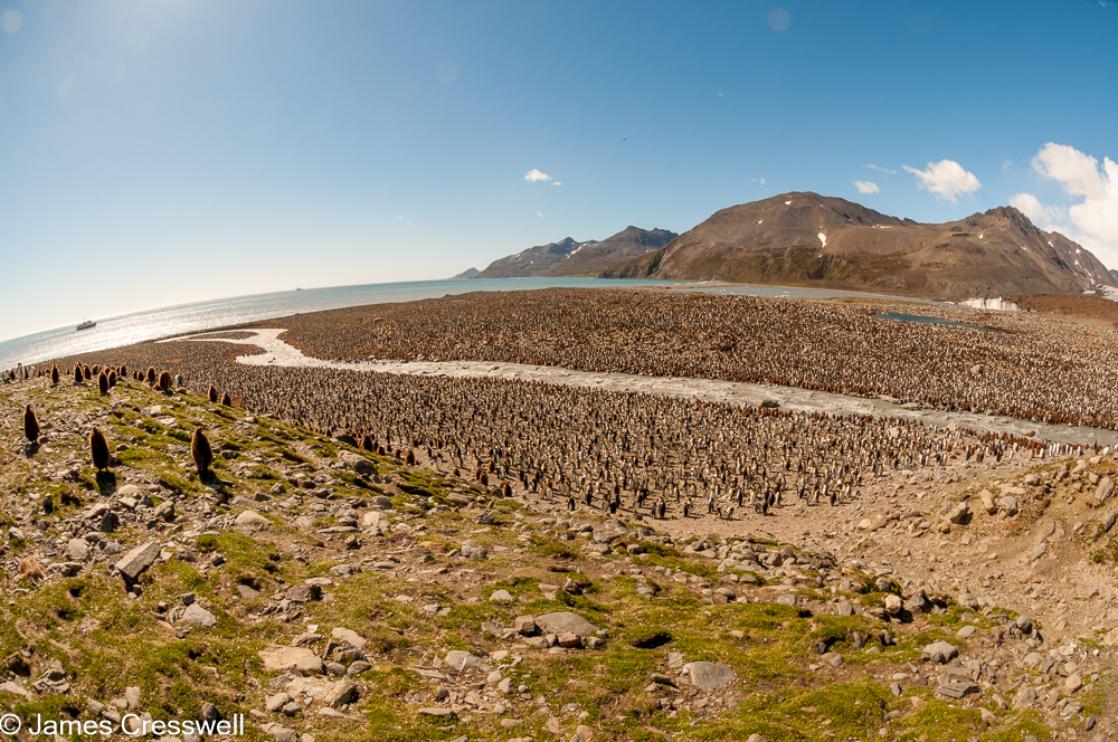 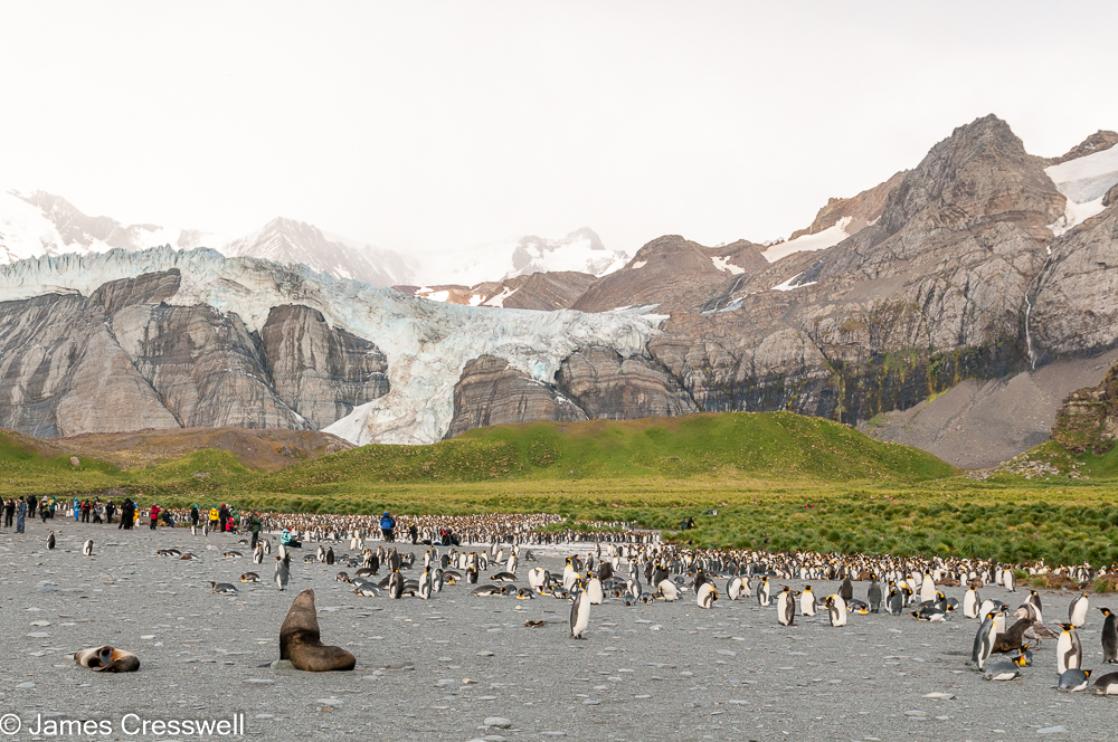 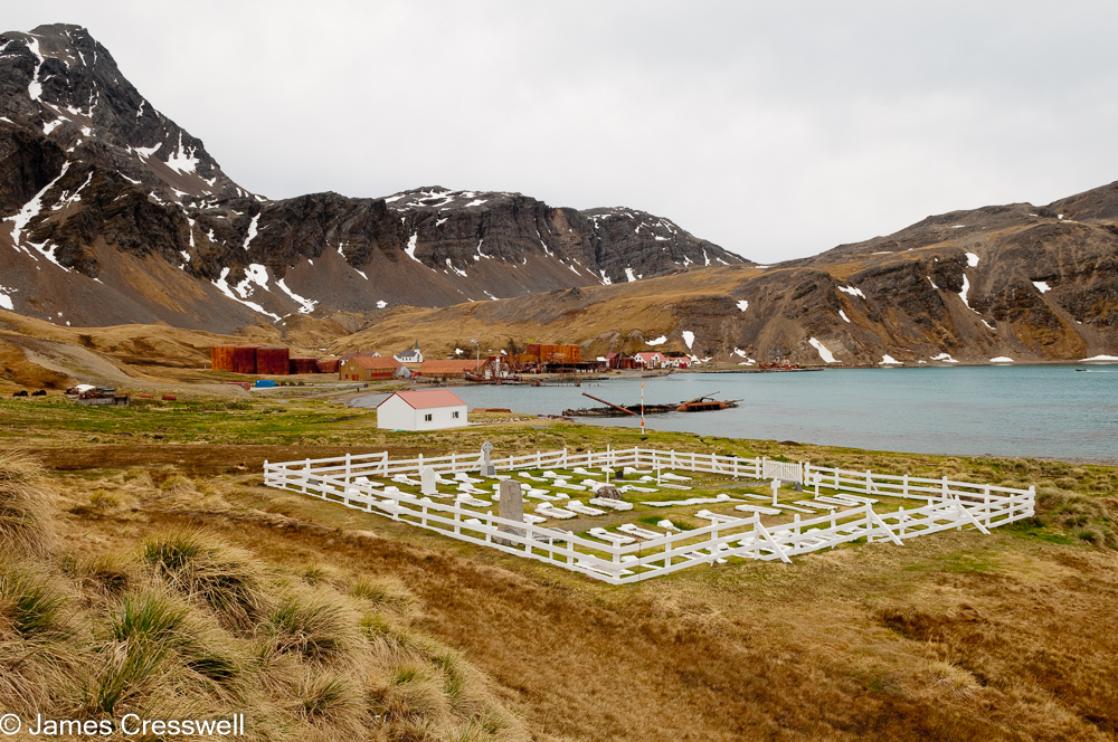 The graveyard where Sir Ernest Shackleton is buried at Grytviken, South Georgia 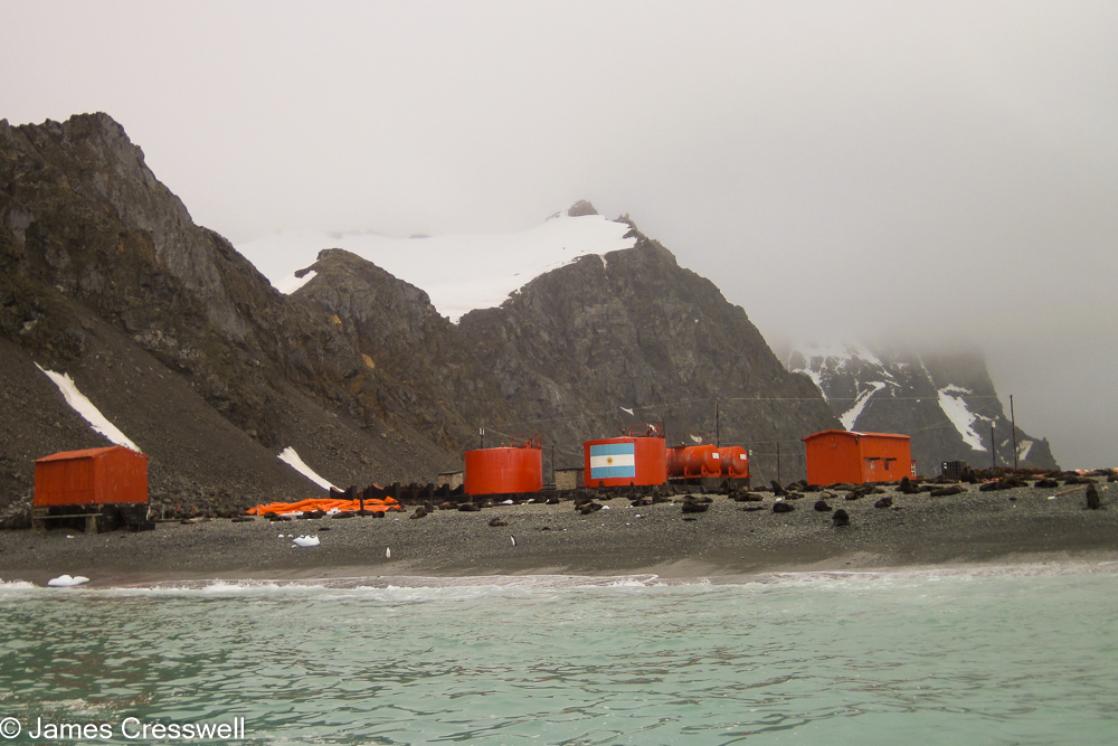 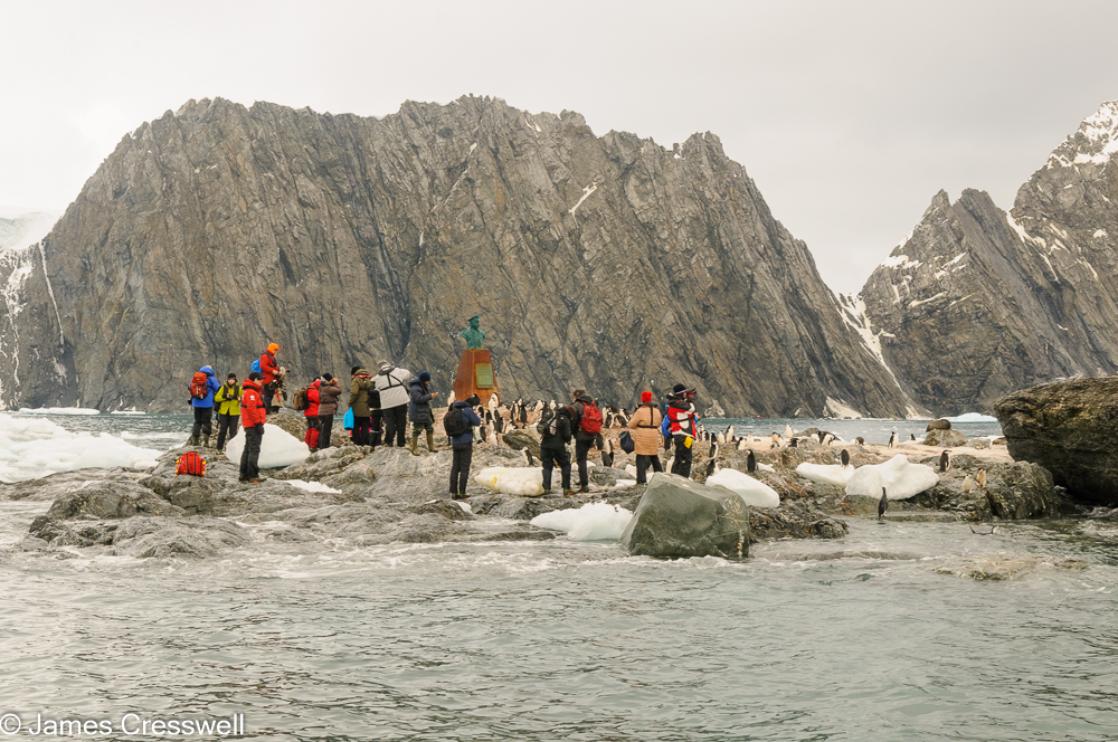 Point Wild, Elephant Island, Antarctica.  Here the 22 men from the Shackleton Expedition who survived the wreck of the Endurance lived for four and one half months before being rescued. 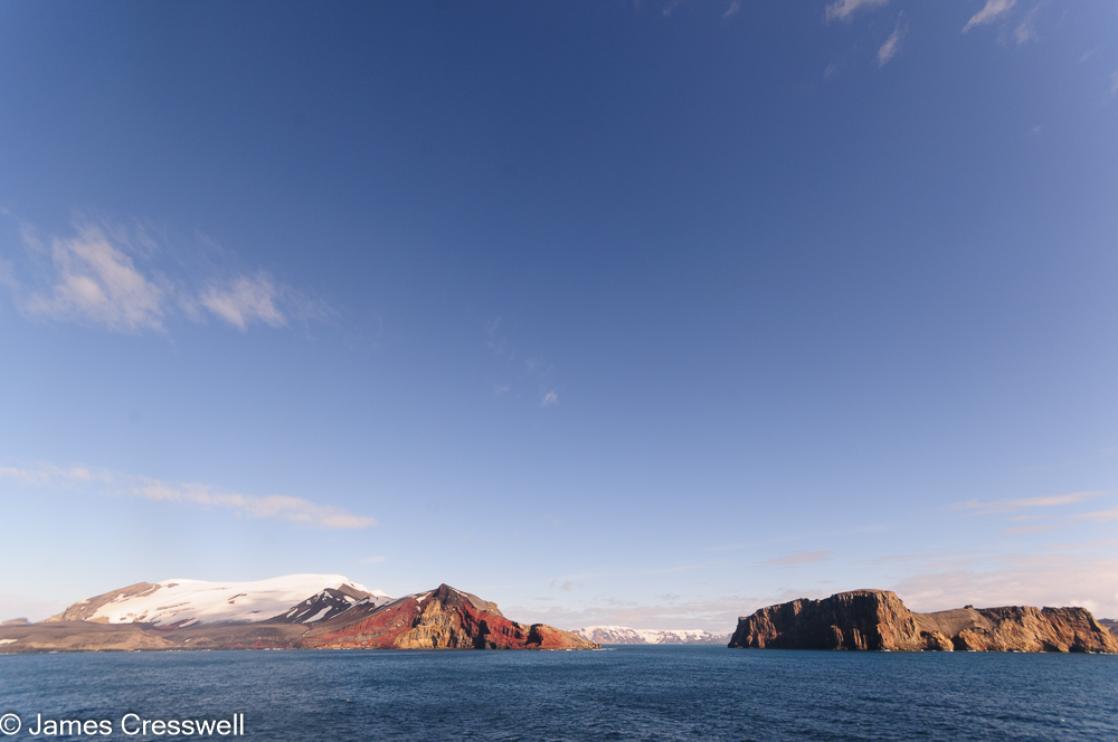 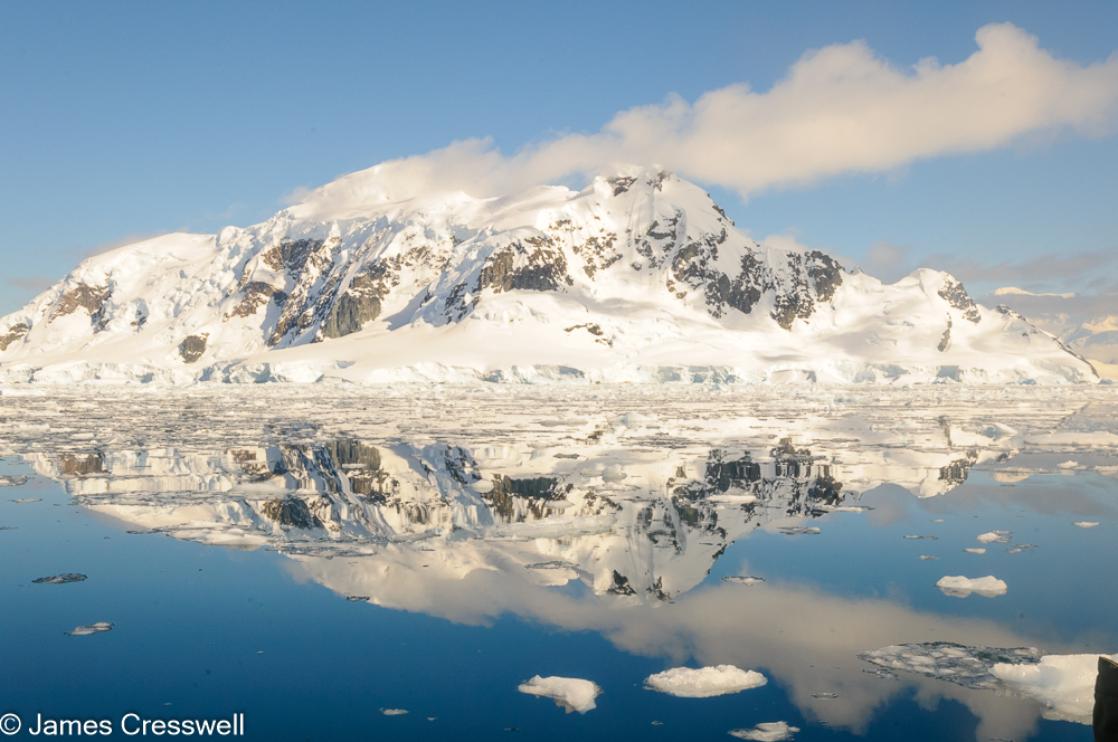 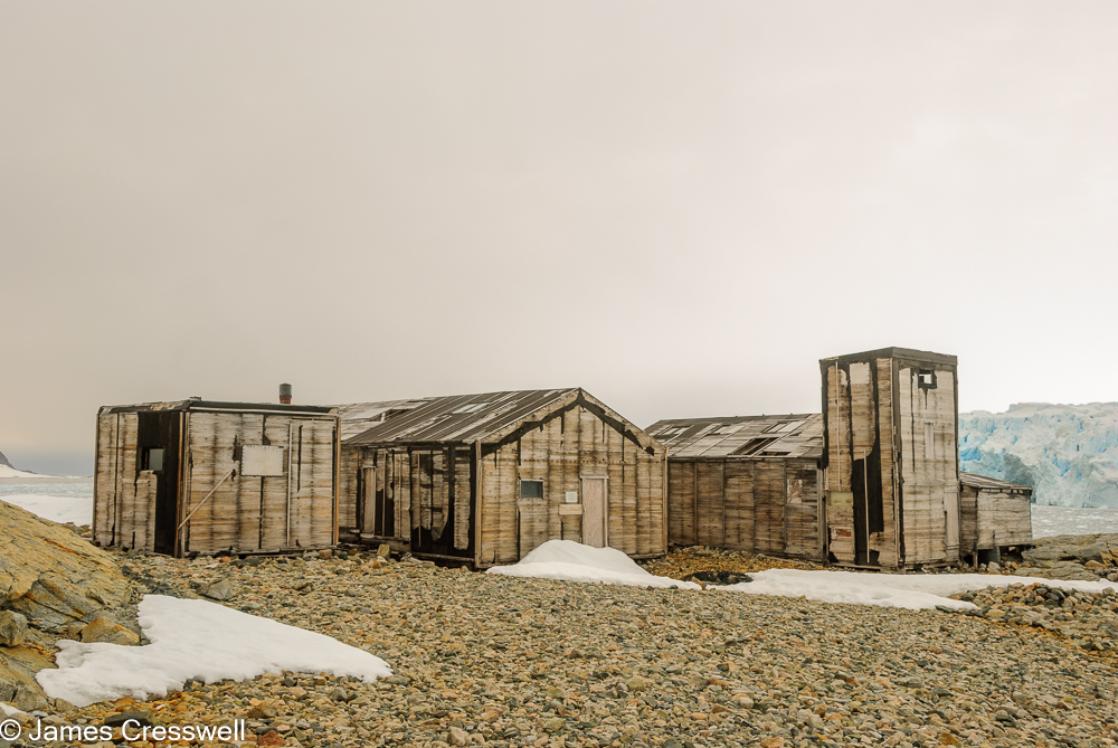 The abandoned British Base at Horseshoe Island, Marguerite Bay, Antarctica 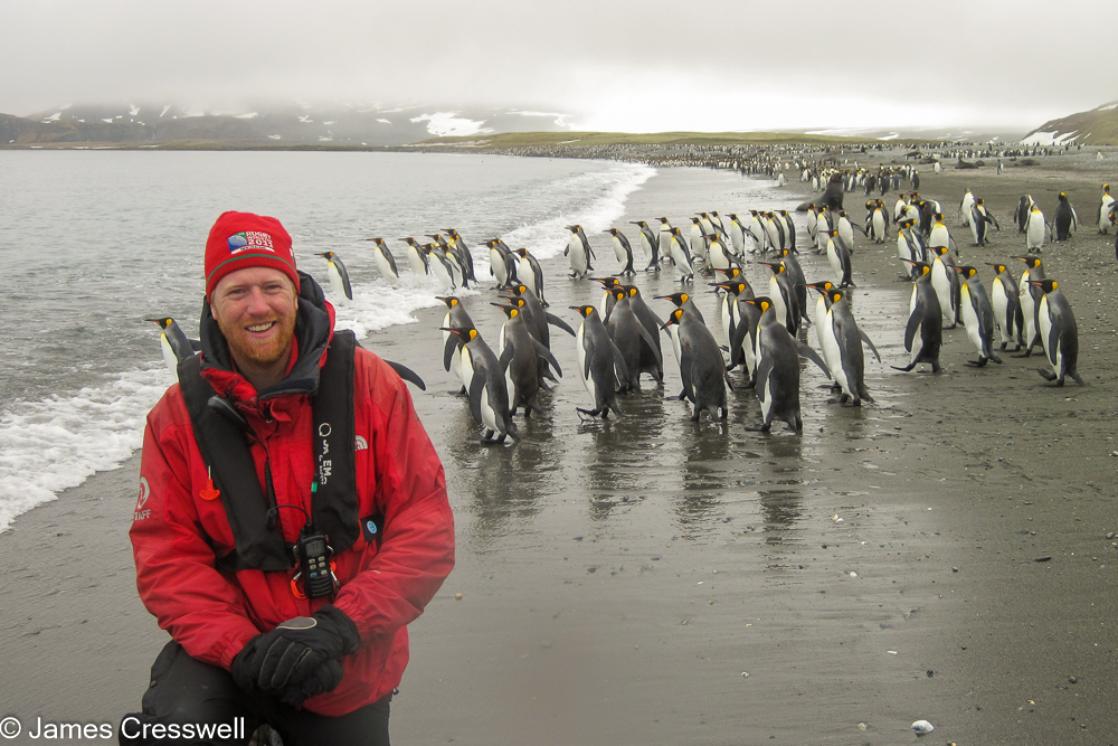 James on the beach with King Penguins at Salisbury Plain, South Georgia

PLEASE NOTE: All itineraries are for guidance only. Programs may vary depending on local ice and weather conditions and in order to take advantage of opportunities to see wildlife. The on-board expedition leader determines the final itinerary. Itineraries may mention places that require permission to land, which must be granted by the relevant national authorities. Such permission is not granted prior to the publishing of these itineraries. Flexibility is paramount for expedition cruises. Average cruising speed  is 10,5 knots.

Day 2: The winged life of the westerlies
Several species of albatross follow the vessel into the westerlies, along with storm petrels, shearwaters, and diving petrels.

Day 3: Finding the Falklands
The Falkland  Islands offer an abundance of wildlife that is easily approachable, though caution is always advised. These islands are largely unknown gems, the site of a 1982 war between the UK and Argentina. Not only do various species of bird live here, but chances are great you’ll see both Peale’s dolphins and Commerson’s dolphins in the surrounding waters.

During this segment of the voyage, you may visit the following sites:

West Point Island – This beautiful island hosts a bounty of birdlife, from shore birds near the landing site to black-browed albatrosses on the nest. Among them is a rookery of rockhopper penguins who have to undertake an incredible climb from the sea to get to their nests among the albatrosses.

Saunders Island – On Saunders Island you can see the black-browed albatross and its sometimes-clumsy landings, along with breeding imperial shags and rockhopper penguins. King penguins, Magellanic penguins, and gentoos are also found here.

Day 4: The seat of Falklands culture
The capital of the Falklands and center of its culture, Port Stanley has some Victorian-era charm: colorful houses, well-tended gardens, and English-style pubs are all to be found here. You can also see several century-old clipper ships nearby, silent witnesses to the hardships of 19th century sailors. The small but interesting museum is also worth a visit, covering the early days of settlement up to the Falklands War. Approximately 2,100 people live in Port Stanley. Feel free to wander at will, though be aware that admission fees to local attractions are not included in the voyage.

Day 5 – 6: Once more to the sea
En route to South Georgia, you now cross the Antarctic Convergence. The temperature cools considerably within the space of a few hours, and nutritious water rises to the surface of the sea due to colliding water columns. This phenomenon attracts a multitude of seabirds near the ship, including several species of albatross, shearwaters, petrels, prions, and skuas.

Day 7 – 10: South Georgia journey
Today you arrive at the first South Georgia activity site. Please keep in mind that weather conditions in this area can be challenging, largely dictating the program.

Over the next several days, you have a chance to visit the following sites:

Prion Island – This location is closed during the early part of the wandering albatross breeding season (November 20 – January 7). From January on, the breeding adults have found their partners and are sitting on eggs or nursing their chicks. Enjoy witnessing the gentle nature of these animals, which possess the largest wingspan of any birds in the world.

Fortuna Bay – Near beaches inhabited by various penguins and seals, you have the chance to follow the final leg of Shackleton’s route to the abandoned whaling village of Stromness. This path cuts across the mountain pass beyond Shackleton’s Waterfall, and as the terrain is partly swampy, be prepared to cross a few small streams.

Salisbury Plain, St. Andrews Bay, Gold Harbour – These sites not only house the three largest king penguin colonies in South Georgia, they’re also three of the world’s largest breeding beaches for Antarctic fur seals. Literarily millions breed on South Georgia during December and January. By February the young fur seals are curious and playful and fill the surf with life and fun and large elephant seals come to the beaches to molt.

Grytviken – In this abandoned whaling station, king penguins walk the streets and elephant seals lie around like they own the place – because they basically do. Here you might be able to see the South Georgia Museum as well as Shackleton’s grave.

Day 11: Southward bound
There may be sea ice on this route, and at the edge of the ice some south polar skuas and snow petrels could join the other seabirds trailing the vessel south.

Day 12: The scenic vistas of South Orkney
Depending on the conditions, you might visit Orcadas Base, an Argentine scientific station on Laurie Island in the South Orkney archipelago. The personnel here will happily show you their facility, where you can enjoy expansive views of the surrounding glaciers. If a visit isn’t possible, you may instead land in Coronation Island’s Shingle Cove.

Day 13: Legendary Elephant Island
You‘ve now completed roughly the same route (albeit in the opposite direction) as Sir Ernest Shackleton did using only a small life boat, the James Caird, in spring of 1916. Watching Elephant Island materialize on the horizon after crossing all that water, it’s hard not to marvel at how he and his five-man crew accomplished that feat.

The purpose of Shackleton’s crossing was to rescue 22 shipwrecked members of his Imperial Trans-Antarctic Expedition, also known as the Endurance Expedition, who were stranded on Elephant Island. For four and a half months, Shackleton undertook this legendary rescue.

Conditions on Elephant Island are severe. The coastline is mostly made up of vertical rock and ice cliffs highly exposed to the elements. If possible you will take the Zodiacs to Point Wild, where the marooned members of Shackleton’s expedition miraculously managed to survive.

Day 15: Scenes of South Shetland
The volcanic islands of the South Shetlands are windswept and often cloaked in mist, but they do offer subtle pleasures: There’s a wide variety of flora (mosses, lichens, flowering grasses) and no small amount of fauna (gentoo penguins, chinstrap penguins, southern giant petrels).

In Deception Island, the ship plunges through Neptune’s Bellows and into the flooded caldera. Here you find hot springs, an abandoned whaling station, and thousands of cape petrels – along with kelp gulls, brown and south polar skuas, and Antarctic terns. A good hike is a possibility in this fascinating and desolate volcanic landscape.

Day 16 – 20: Onward into Antarctica
Gray stone peaks sketched with snow, towers of broken blue-white ice, and unique polar wildlife below and above welcome you into the otherworldly expanse of Antarctica. You enter the area around Gerlache Strait, venturing into one of the most beautiful settings Antarctica has to offer.

Sites you may visit here include:

Crystal Sound – Your journey takes you south along the Argentine Islands to this ice-packed body of water, and from here across the Polar Circle in the morning.

Detaille Island – You may make a landing at an abandoned British research station here, taking in the island’s lofty mountains and imposing glaciers.

Pourquoi Pas Island – You might circumnavigate this island, named after the ship of the famous French explorer Jean-Baptiste Charcot. This location is known for its tight fjords and lofty, glacier-crowded mountains.

Horseshoe Island – This is the location of the former British Base Y, a remnant of the 1950s that is now unmanned though still equipped with almost all the technology it had while in service.

As with all of our Antarctic trips, conditions on the Drake Passage determine the exact time of departure.

Day 21 – 22: Familiar seas, familiar friends
Your return voyage is far from lonely. While crossing the Drake, you’re again greeted by the vast array of seabirds remembered from the passage south. But they seem a little more familiar to you now, and you to them.

Day 23: There and back again
Every adventure, no matter how grand, must eventually come to an end. It’s now time to disembark in Ushuaia, but with memories that will accompany you wherever your next adventure lies.

Be sure to also open the Falkland Islands and Antarctica pages