This Polar Circle and Antarctic Peninsula cruise passes through waters travelled by Humpback, Minke and Fin whales. Anchoring in various spots around the region, the expedition offers the chance to hike, kayak, and dive in the iceberg-heavy waters. 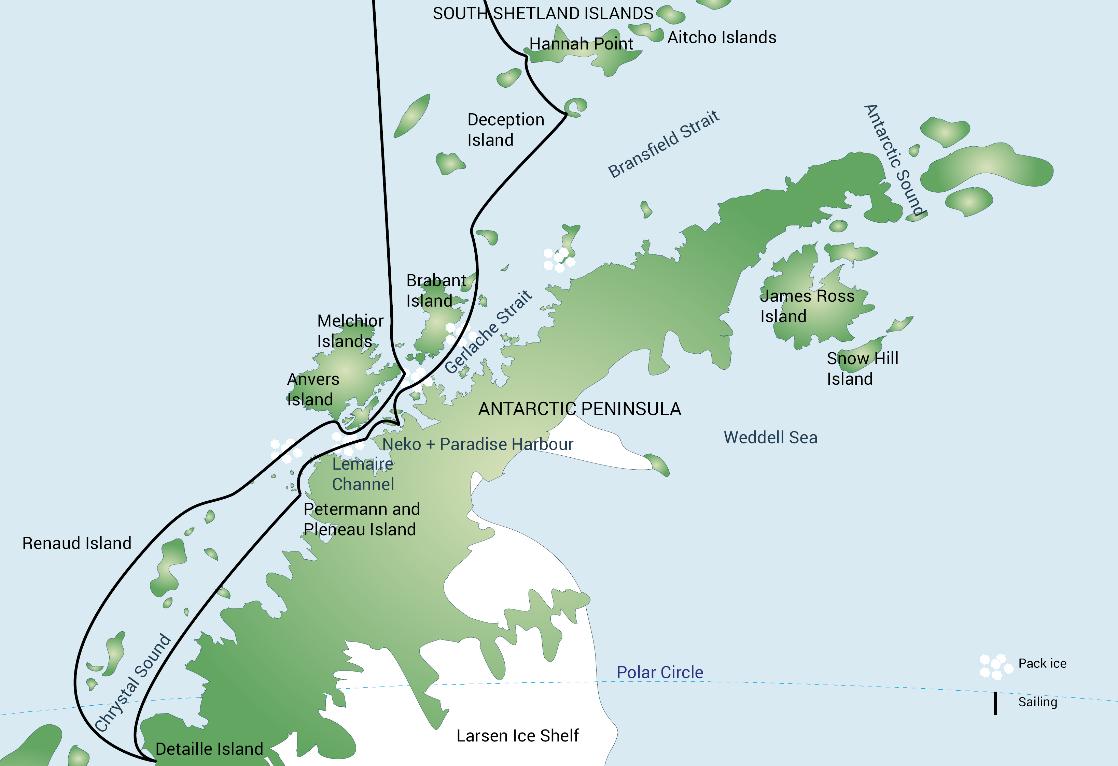 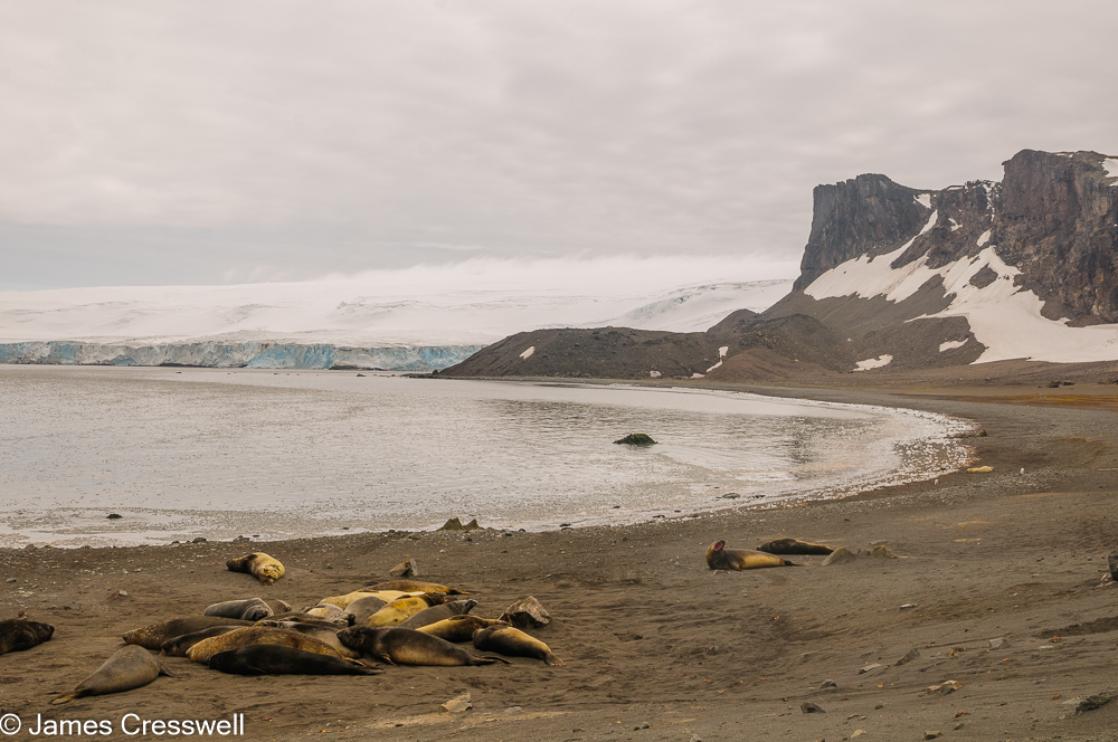 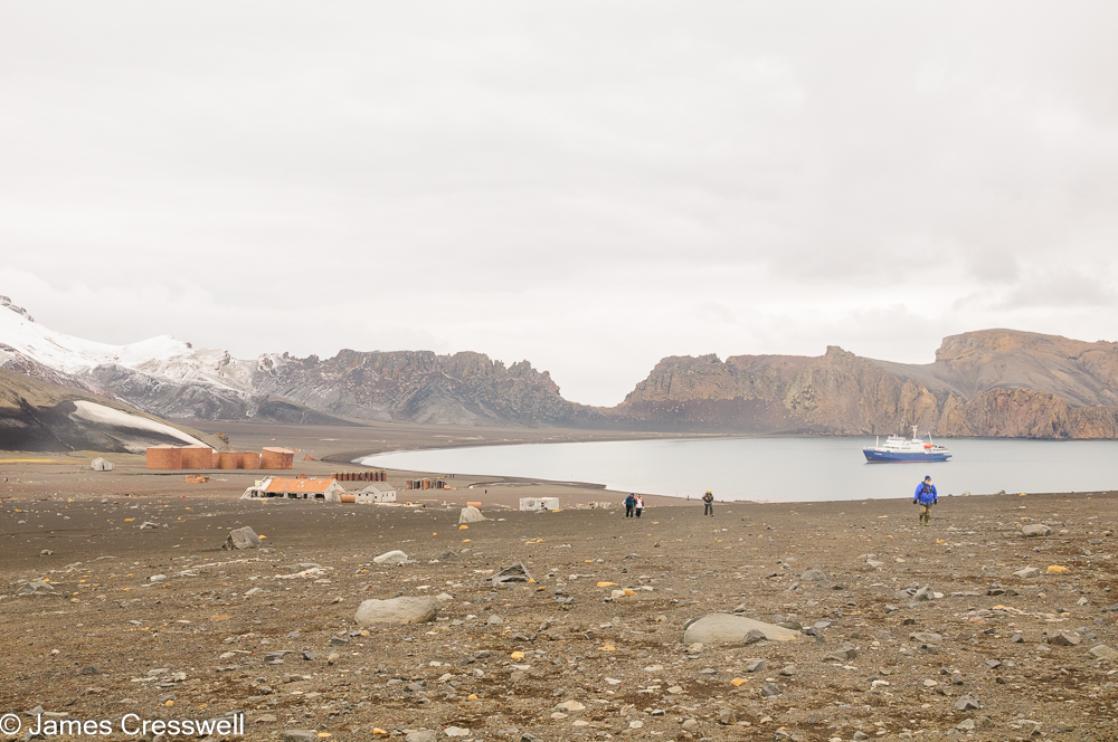 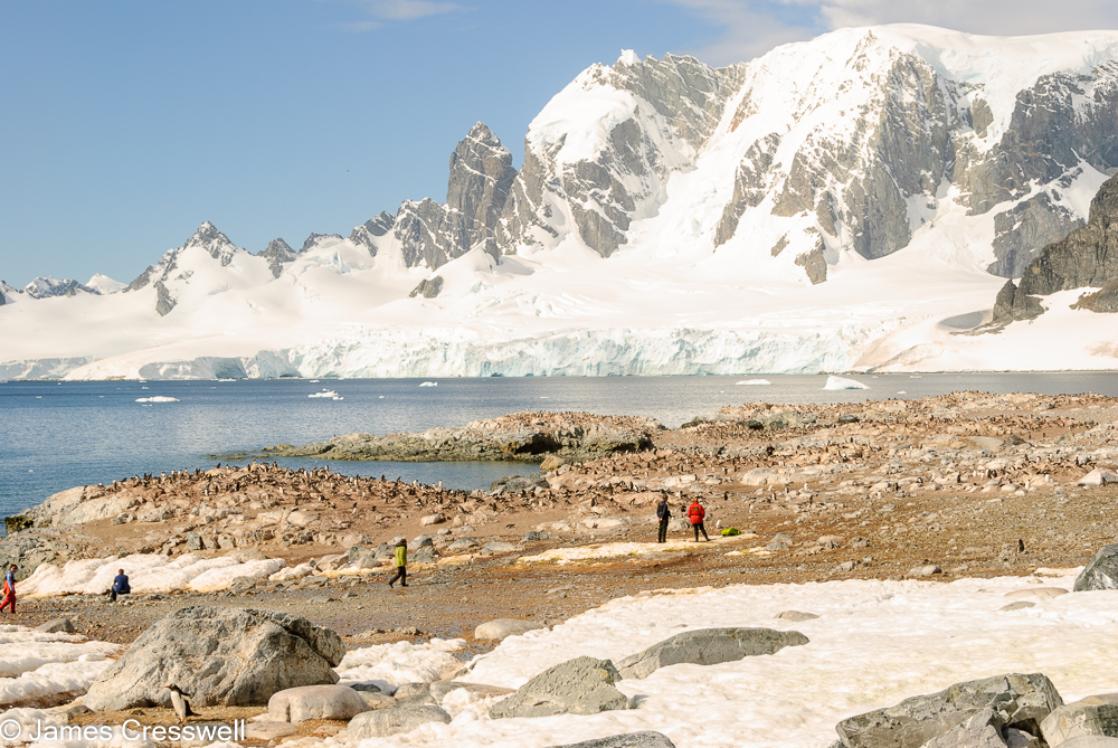 Cuverville Island in the Errera Channel on the Danco Coast 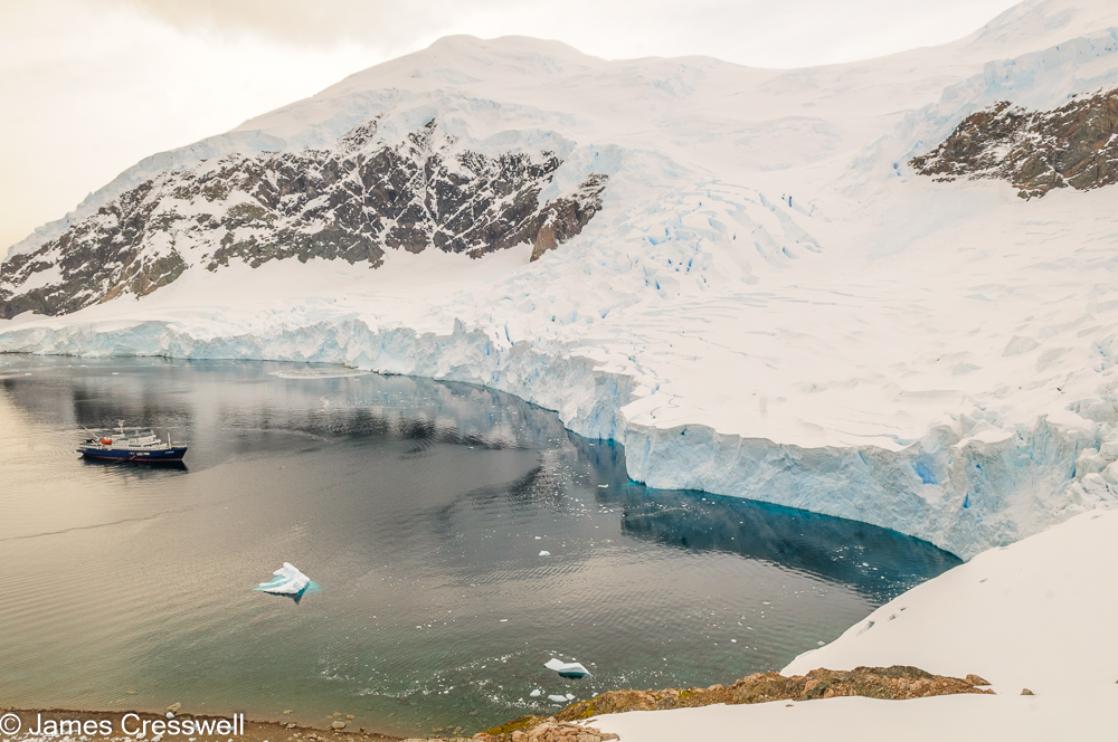 The m/v Plancius at Neko Harbour on the Danco Coast 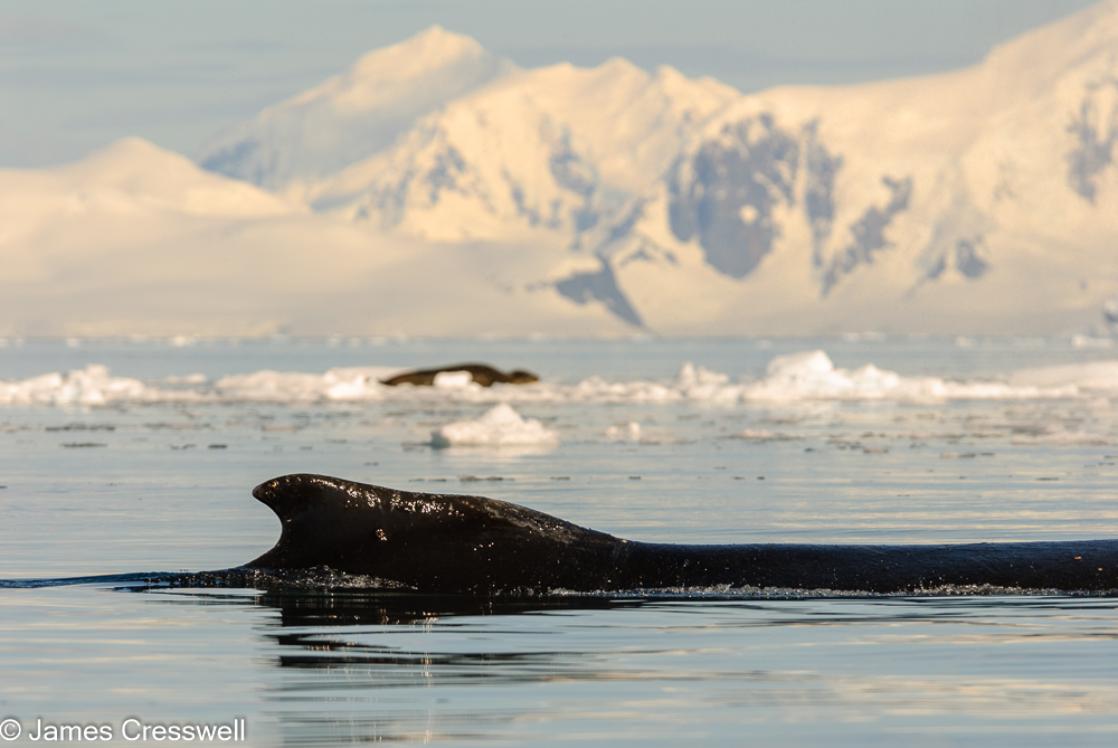 A humpack whale and a leopard seal in Paradise Harbour 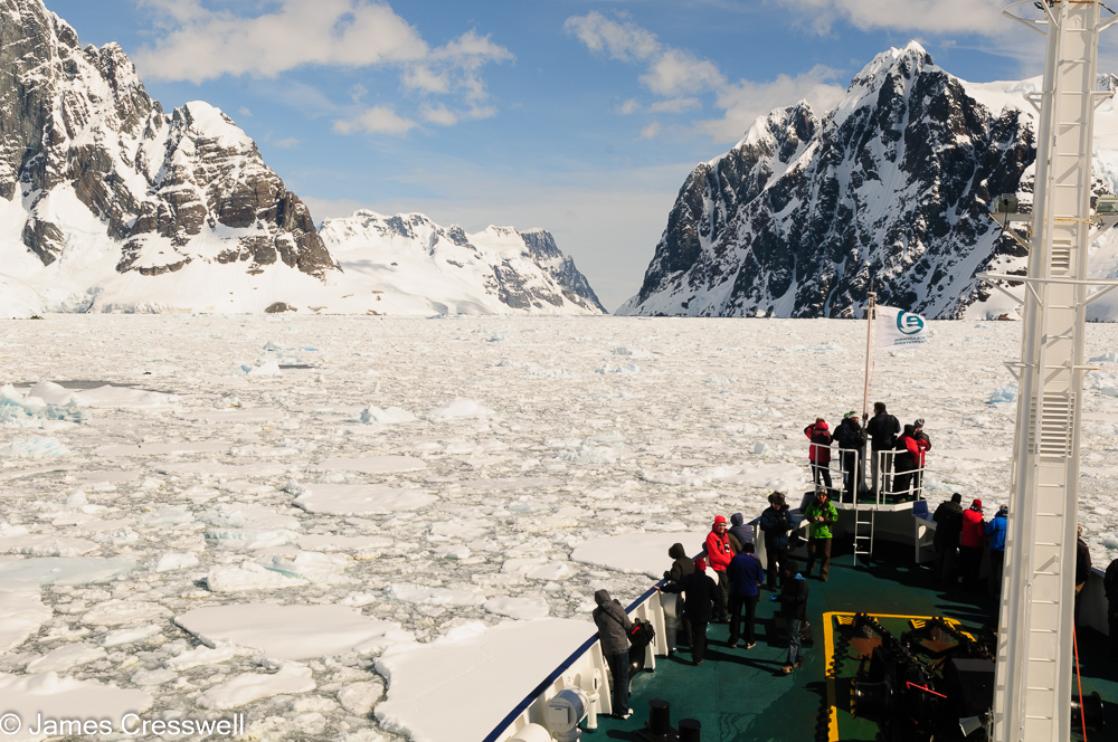 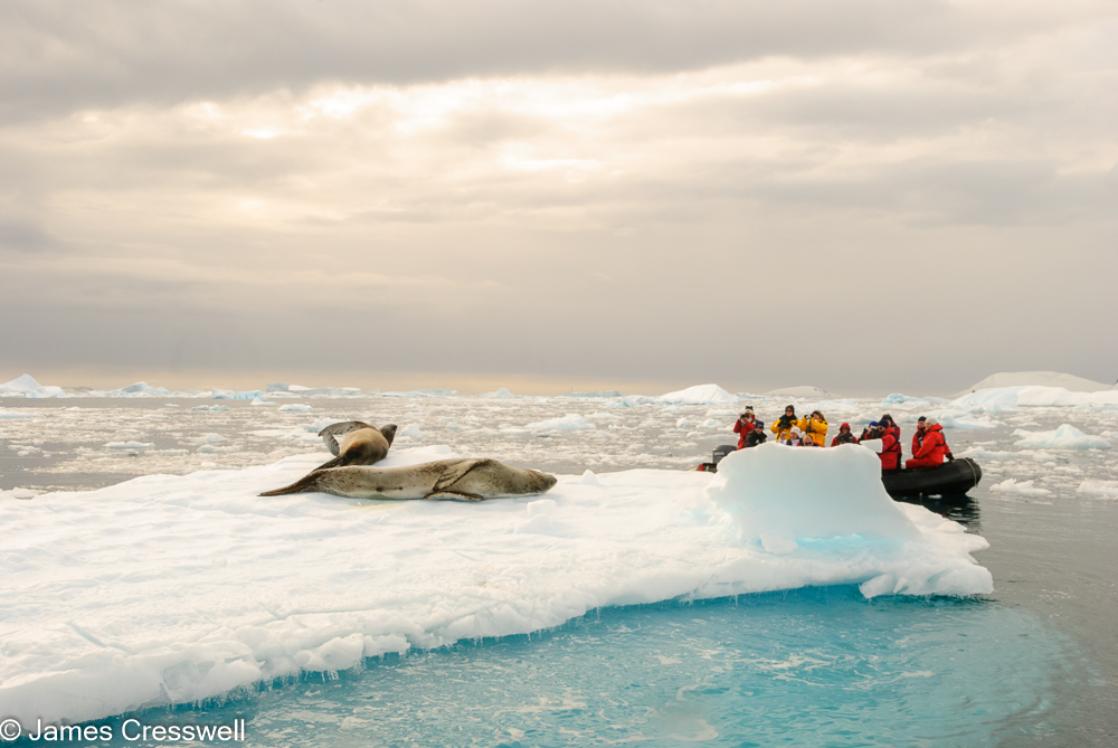 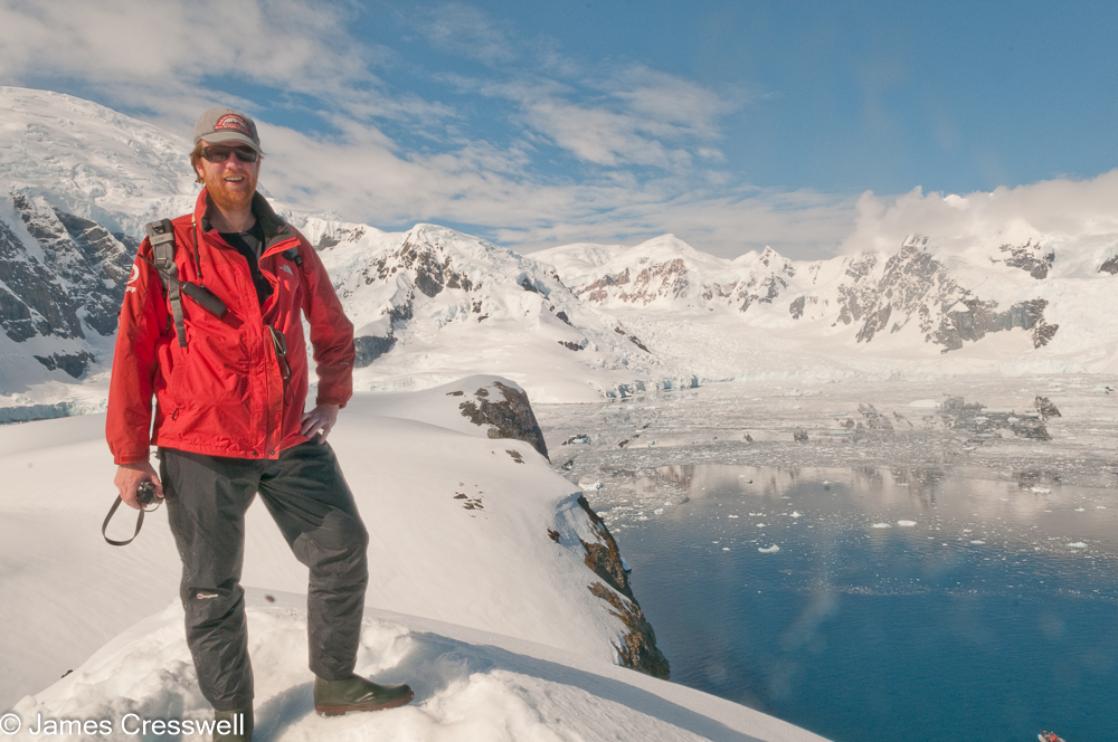 PLEASE NOTE: All itineraries are for guidance only. Programs may vary depending on local ice and weather conditions and in order to take advantage of opportunities to see wildlife. The on-board expedition leader determines the final itinerary. Itineraries may mention places that require permission to land, which must be granted by the relevant national authorities. Such permission is not granted prior to the publishing of these itineraries. Flexibility is paramount for expedition cruises. Average cruising speed is 10,5 knots.

Day 2 - 3: Path of the polar explorers
Over the next two days on the Drake Passage, you enjoy some of the same experiences encountered by the great polar explorers who first charted these regions: cool salt breezes, rolling seas, maybe even a fin whale spouting up sea spray. After passing the Antarctic Convergence – Antarctica’s natural boundary, formed when north-flowing cold waters collide with warmer sub-Antarctic seas – you are in the circum-Antarctic upwelling zone. Not only does the marine life change, the avian life changes too. Wandering albatrosses, grey-headed albatrosses, black-browed albatrosses, light-mantled sooty albatrosses, cape pigeons, southern fulmars, Wilson’s storm petrels, blue petrels, and Antarctic petrels are a few of the birds you might see.

Day 4 - 8: Sights of late summer Antarctica
Options for Antarctic Peninsula activities are many, and no less great during the late summer. Humpback whales are prolific in this region, gorging themselves on krill before their migration north. The penguin chicks are also fledging, stirring up activity on the beaches while sleek leopard seals lie in wait, poised to attack the less fortunate ones.

Sites for your Antarctic adventures may include:

Livingston Island – Here you find a wide variety of gentoo and chinstrap penguins on Hannah Point, as well as southern giant petrels and elephant seals hauling out onto the beach.

Deception Island – Actually a subducted crater, this island opens into the sea and creates a natural harbor for the ship. Hot springs, an abandoned whaling station, and multiple bird species – cape petrels, kelp gulls, brown and south polar skuas, and Antarctic terns – can be seen here. Wilson’s storm petrels and black-bellied storm petrels also nest in the ruins of the whaling station in Whalers Bay.

Cuverville Island – A small precipitous island nestled between the mountains of the Antarctic Peninsula and Rongé Island, Cuverville houses a large colony of gentoo penguins and breeding pairs of brown skuas.

Neko Harbour – An epic landscape of mammoth glaciers and endless wind-carved snow, Neko Harbour offers opportunities for a Zodiac cruise and landing that afford the closest views of the surrounding alpine peaks. You might also be able to set foot on the continent here.

Paradise Bay – You could take a Zodiac cruise in these sprawling, ice-flecked waters, where you have a good chance of seeing humpback and minke whales.

Pléneau & Petermann Islands – If the ice allows it, you may sail through the Lemaire Channel in search of Adélie penguins and blue-eyed shags. There’s also a good chance you’ll encounter humpback and minke whales as well as leopard seals.

Crystal Sound – Your journey takes you south along the Argentine Islands to this ice-packed body of water, and from here across the Polar Circle in the morning.

Detaille Island – You may make a landing at an abandoned British research station here, taking in the island’s lofty mountains and imposing glaciers.

Fish Islands – Further north you encounter one of the southernmost Adélie penguin and blue-eyed shag colonies in the Antarctic Peninsula.

Melchior Islands – These islands offer a beautiful landscape rich with icebergs. Leopard seals, crabeater seals, and whales are found here, and there are excellent opportunities for kayaking and diving.

Conditions on the Drake Passage determine the exact time of departure.

This voyage has an extra day in Antarctica giving you the opportunity to make more landings and see more wildlife.

t is your responsibility to book your travel to and from the start and finish of the expedition. This is normally a flight. If you would like to carbon offset this cost please use our carbon offset calculator here.